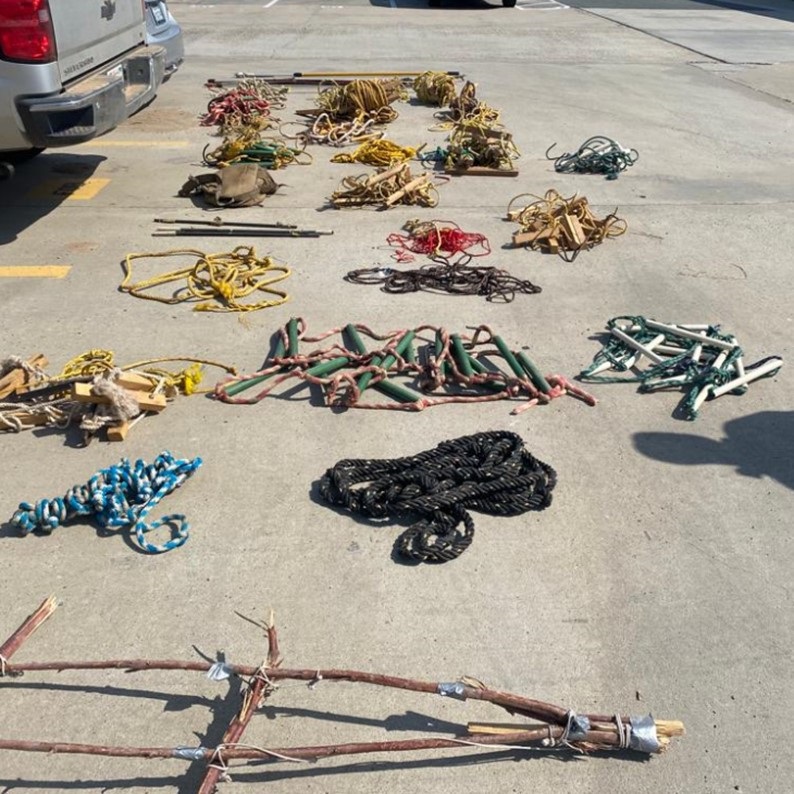 Busted: on Wednesday around 6 am, US Border Patrol Agents from the San Diego Sector Foreign Operations Branch coordinated a bi-national patrol operation with Guardia Nacional and Instituto Nacional de Migracion in the mountainous area east of the Otay Mesa Port of Entry.

This area is known for smuggling and bandit activity due to its desolate location and deep canyons on both sides of the international border.

While patrolling the area, BPAs using handheld drone technology observed a group of suspected undocumented migrants and armed smugglers near the international boundary. As the bi-national team responded to the location from both sides of the border, the group saw the agents and absconded deeper into Mexico. The group was able to get away but left behind several items.

The abandoned contraband was secured by the agents and included: one loaded rifle magazine, 75 rounds of 7.62 ammunition, and 29 makeshift ladders used to scale the border wall. All the seized items were transported to the Joint California Forensic Center for processing.

Any information gleaned from the forensic process will be shared with the GoM partners.

“Our agents continue to leverage the strong relationships we have forged with our law enforcement partners in Mexico,” said San Diego Chief Patrol Agent Aaron M. Heitke. “Border safety has always been a shared concern, and this is just one example of how our coordinated efforts against a common threat have paid off.”

This fiscal year, San Diego Sector Border Patrol has conducted over 149 bi-national patrols with GoM and will continue to do so with the goal of dismantling Transnational Criminal Organizations and disrupting bandit activity along our shared borders.

To prevent the illicit smuggling of humans, drugs, and other contraband, the US Border Patrol maintains a high level of vigilance on corridors of egress away from our Nation’s borders. To report suspicious activity to the US Border Patrol, contact San Diego Sector at (619) 498-9900.