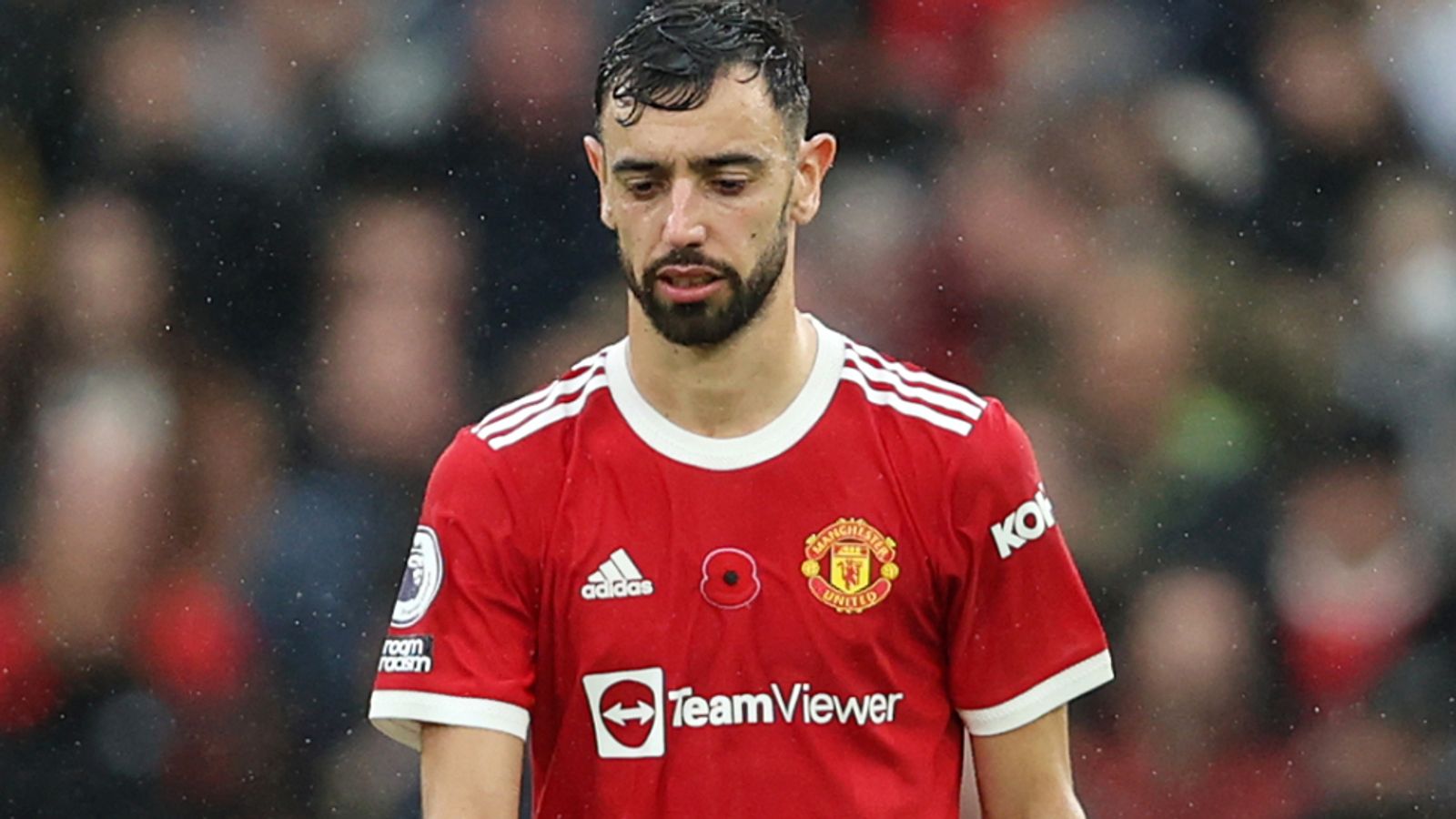 Bruno Fernandes has not hit the heights of his first two seasons at Manchester United this year – but is he underperforming for the club?

The full-time whistle at the Etihad Stadium last Sunday brought Manchester United’s miserable evening to an end as Manchester City romped to a comfortable 4-1 victory. Goals from Kevin De Bruyne and Riyad Mahrez sealed the points for Pep Guardiola’s side, although United’s unconventional line-up did trouble them for a period.

Interim manager Ralf Rangnick’s choice of formation saw Fernandes start as United’s most advanced player alongside Paul Pogba, but the ‘Portuguese magnifico’ – a term of endearment used by the club’s supporters in a chant about the player – was unable to influence affairs as he has done for the Red Devils over the previous two seasons.

However, Fernandes was involved in the passage of play that led to Jadon Sancho’s clinical equalizer in the first half. He played a first-time pass to Pogba that kickstarted United’s counter-attacking move and followed this with an outside overlap for Sancho, which provided space for the winger to shoot and score against his old club.

FREE TO WATCH: Highlights from Manchester City’s win over Manchester United in the Premier League.

Despite his role in the goal, Fernandes’ potency and form appears to have waned this season, coinciding with the team’s stuttering form as their chances of a top-four finish slip away.

So just how much has Fernandes declined this season and what is behind his slump in form?

A glance at United’s team stats across all competitions for this season immediately reveals that Fernandes has continued to play an integral role for the side as he is the club’s second-highest scorer with nine goals, behind only Cristiano Ronaldo (15).

He is also the most prolific provider of goals in the squad with 14 assists.

Pogba, who missed several months of the campaign with injury, is second with nine assists, though this is caveated by the fact the Frenchman registered seven of these in four Premier League games at the start of the season – including four in the opening day win against Leeds.

The importance of Fernandes to United’s attacking threat is clearly evident, but the 27-year-old appears to have fallen victim to the high standards he has set himself during his time in Manchester.

Fernandes joined the club in January 2020 for £ 67.7m at a time when the side were struggling with a dearth of creativity under former manager Ole Gunnar Solskjaer.

Though he did not immediately make an impact on his Premier League debut against Wolves, Fernandes went on to show his quality over the remainder of the 2019/20 season as he notched 20 goal involvements in 22 appearances.

FREE TO WATCH: Highlights from Manchester United’s win over Manchester City in the Premier League.

This included a wonderfully taken assist against Manchester City in a 2-0 win as well as goals against Tottenham, Everton and Leicester.

His form carried on into the following season and he continued to demonstrate his offensive verve with a further 28 goals and 17 assists in all competitions, ranking him first within United’s squad on these metrics.

Additionally, he ranked second in the Premier League for goal involvements in the 2020/21 season (30) behind Harry Kane (37) and created the most chances in the division that year as well (95).

Consequently, this sustained brilliance has become the standard against which Fernandes’ current performances will be judged and he has been unable to replicate that form thus far this season.

So why has Fernandes experienced an apparent downturn?

The return of Ronaldo to Old Trafford has appeared to have a knock-on effect on Fernandes. Though the 37-year-old forward is United’s highest goalscorer this season, his form has largely been inconsistent since the turn of the year, with his goal against Brighton ending his longest scoring drought since 2008/09.

FREE TO WATCH: Highlights from Manchester United’s win against Brighton in the Premier League.

Prior to his compatriot’s arrival at the club, Fernandes was United’s nominated penalty-taker, scoring nine of his 10 attempted Premier League penalties last season – this constituted half of his league goals that year (if penalties are discounted, Fernandes has already equaled his league tally from last season).

This season, however, Fernandes has taken just one Premier League spot-kick, when he ballooned the ball over the bar in the home defeat to Aston Villa.

Ronaldo has since become the club’s go-to player for penalties, scoring twice from three attempts. The 37-year-old missed the target with a penalty against Middlesbrough in the fourth round of the FA Cup.

In addition to playing chiefly as a striker, Ronaldo has tended to focus most of his play on the left wing in the Premier League – an area that Fernandes frequently operates in. As such, this may explain why Fernandes’ direct attacking output has declined this season compared to his first two campaigns at the club.

The gap left by Fernandes’ lack of shooting this season appears to have been filled by Ronaldo, who ranks third in the league for shots taken (79) at a rate of 3.87 per 90 minutes.

Fernandes has played a lot of football since joining from Sporting Lisbon and has been an ever-present figure in United’s starting XI when fit, with over 9,000 minutes of game time for the club. He has also regularly turned out for his national side, playing in almost all of Portugal’s fixtures since 2019.

This, in tandem with the often-congested fixture schedules that teams have had to play through as a result of the coronavirus pandemic, may mean that Fernandes is experiencing fatigue which could be hampering his form this season.

Fernandes’ relative downturn in form has coincided with fallow periods for his team-mates.

At the conclusion of last season, United appeared to be building towards developing themselves as a resolute, counter-attacking side capable of fast breaks by utilizing the pace of Marcus Rashford, coupled with the pressing and clinical finishing of experienced striker Edinson Cavani. Both benefited from Fernandes’ impact, as he provided five Premier League assists for Rashford and two for Cavani.

This season, that has changed. Solskjaer’s departure from the club after a poor run of results and Rangnick’s arrival has placed the team’s tactical blueprint in a state of flux as the German searches for a method that consistently brings the best out of his players.

Coupled with this is the fact that Cavani has made just 15 appearances in all competitions, missing out on numerous matches due to injury or a lack of match fitness.

Rashford’s output has also declined sharply after missing the start of the campaign as he recuperated from shoulder surgery. The 24-year-old had 36 goal involvements across all competitions in the previous campaign, but has scored just five times this year and looks to be suffering a crisis of confidence.

After 27 Premier League games this year, Fernandes is creating chances for his team-mates at a similar rate when compared to the same stage last season and currently leads the league in chances created (76).

He is also contributing three key passes and 0.31 expected assists per 90 minutes, which is among the highest for his position in the division. Fernandes could therefore be considered somewhat unlucky not to have registered more assists for his side.

Is the best yet to come?

While Fernandes has underperformed this season compared to his previous contributions for Manchester United, his underlying statistics demonstrate his continued value as a creative presence for the side and he is likely to play a part in any success the team has moving forward.

The rest of the season will be a challenge – Ralf Rangnick’s side are chasing a top-four league finish to secure European football next year, but face a stern test on Saturday in Antonio Conte’s Tottenham, live on Sky Sports, ahead of fixtures against Arsenal, Chelsea and Liverpool.

The Champions League awaits as well, with the second leg of their last-16 tie against Atletico Madrid looming large. The first-leg ended in a 1-1 draw at the Wanda Metropolitano, placing more gravitas on the return fixture at Old Trafford.

All who are associated with Manchester United will be hoping that Fernandes can rediscover the potency of his first 18 months at the club to maximize his side’s chances of success for the rest of the season.