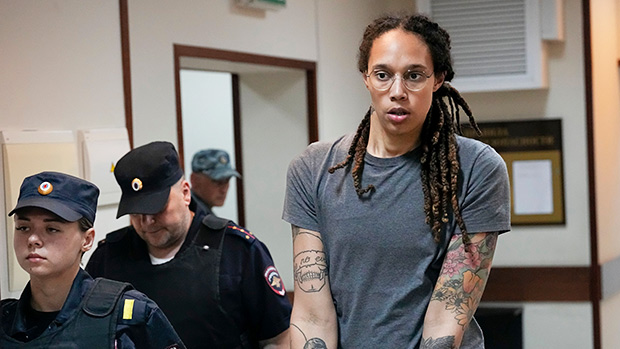 After a Russian court found Brittney Griner guilty of drug charges, President Joe Biden vowed that his administration would “work tireless and pursue every possible avenue” to bring her home. Those efforts have paid off. On Dec. 8, 2022, the Associated Press confirmed that Brittney would be granted her release as part of a prisoner swap with Russia. The U.S. will be releasing Russian arms dealer Viktor Bout in exchange for the release of Brittney.

Before Britney’s conviction, there were talks of her being involved in a prisoner swap. Reports claimed the U.S. was willing to trade Viktor Bout, a convicted Russian arms dealer, for Brittney and former Marine Paul Whelan. Whelan, now a corporate security executive, was arrested in December 2018 on espionage charges (Whelan has maintained his innocence.) He was sentenced to 16 years in prison in June 2020. On Aug. 5, Russian Foreign Minister Sergei Lavrov said Russia was “ready to discuss this topic” of a trade, per Axios.

In the leadup to her trial, U.S. State Department listed Britney as being “wrongfully detained,” a term that President Biden used in his statement following her conviction. “Today, American citizen Britney Griner received a prison sentence that is one more reminder of what the world already knew: Russia is wrongfully detaining Britney,” he said in his statement.

The drama began on Feb. 17, when Brittney was arrested at the Moscow airport. The basketball star was traveling to the country to play for Russia’s UMMC Ekaterinburg during the WNBA offseason and was taken into custody after authorities accused her of drug smuggling. Brittney allegedly had less than one gram of cannabis oil in her luggage. She would eventually say she accidentally packed the vape cartridges in her luggage because she was in a hurry to make her flight. Russia continued to detain Griner for months until her July 1 trial.

Griner pled guilty to drug charges and hoped for leniency from the court. “Considering the nature of her case, the insignificant amount of the substance and [Griner’s] personality and history of positive contributions to global and Russian sport, the defense hopes that the plea will be considered by the court as a mitigating factor and there will be no severe sentence,” her lawyers said in a statement, per CNN. Her attorneys also noted that samples taken from Britney didn’t show any traces of drugs.

The Russian courts ultimately sentenced her to nine years. “We are very disappointed by the verdict. As legal professionals, we believe that the court should be fair to everyone regardless of nationality,” her attorneys said in a statement, per CNN. “The court completely ignored all the evidence of the defense and most importantly, the guilty plea. This contradicts the existing legal practice. Taking into account the amount of the substance (not to mention the defects of the expertise) and the plea, the verdict is absolutely unreasonable. We will certainly file an appeal.”

Brittney Griner: 5 Things About The WNBA Star Whose Appeal Was Rejected In a Russian Court