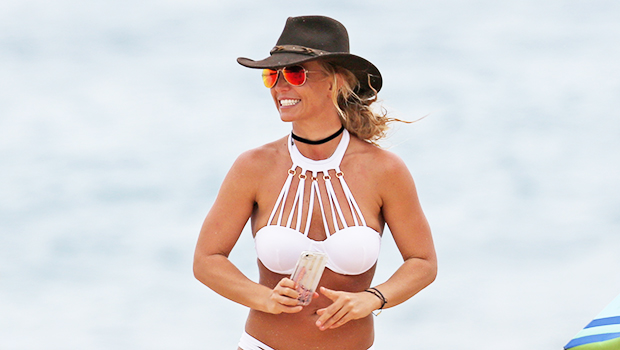 Britney Spears got her fans’ attention on Dec. 13 when she posted a risqué Instagram video that showed her “expressing” her “freedom.” The 41-year-old singer, who had a birthday earlier this month, was standing under water in a shower while topless and wearing red bikini bottoms that tied on the sides, in the eye-catching clip. She had her hair pulled up and held onto her chest area the entire time as she rocked some slow dance moves to the added track, “Doin’ It” by LL Cool J.

“41 and finally expressing my freedom has never felt better !!! Learning to love myself has become my passion this year … I’d rather be in my skin than wear my skin 💁🏼‍♀️ !!!!” she captioned the post.

Once the video was published, her fans didn’t hold back on responding in the comments section. One fan noted that the video seemed to be posted and then deleted before being posted again and asked why, while another fan simply wrote, “Love you.” A third pointed out the low water pressure in the shower and a fourth wrote, “Hot momma!!”

Britney’s latest memorable video comes after she made headlines for giving off “…Baby One More Time” music video vibes when she wore a plaid skirt on a plane. She paired it with a white long-sleeved top that was ruffled at the sleeves and had her hair down as she stood in the jet and smiled. “New York City here I come !!! How about them apples,” she captioned the video, which was set to the ’80s song “Your Love” by The Outfield.

Britney also recently revealed she’s been doing meditation and admitted her husband Sam Asghari thinks she’s “gone bonkers” for doing it. “I’m that meditation bitch now 🧘🏼‍♀️… my husband hates it … he thinks I’ve gone bonkers,” she wrote alongside a 1961 black and white photo of a little girl dancing in front of a bear in Paris, France, on Dec. 10. “My masseuse is always doing it and he looks so peaceful … I’m like wow … that looks interesting. Falling deep into yourself … I say all this because I try to make effort to take care of myself.”

Britney Spears & Justin Timberlake’s Dating Timeline: From The ‘Mickey Mouse Club’ To Their Breakup & Through Today

macOS Ventura 13.1 is out with new Freeform app and iCloud security updates