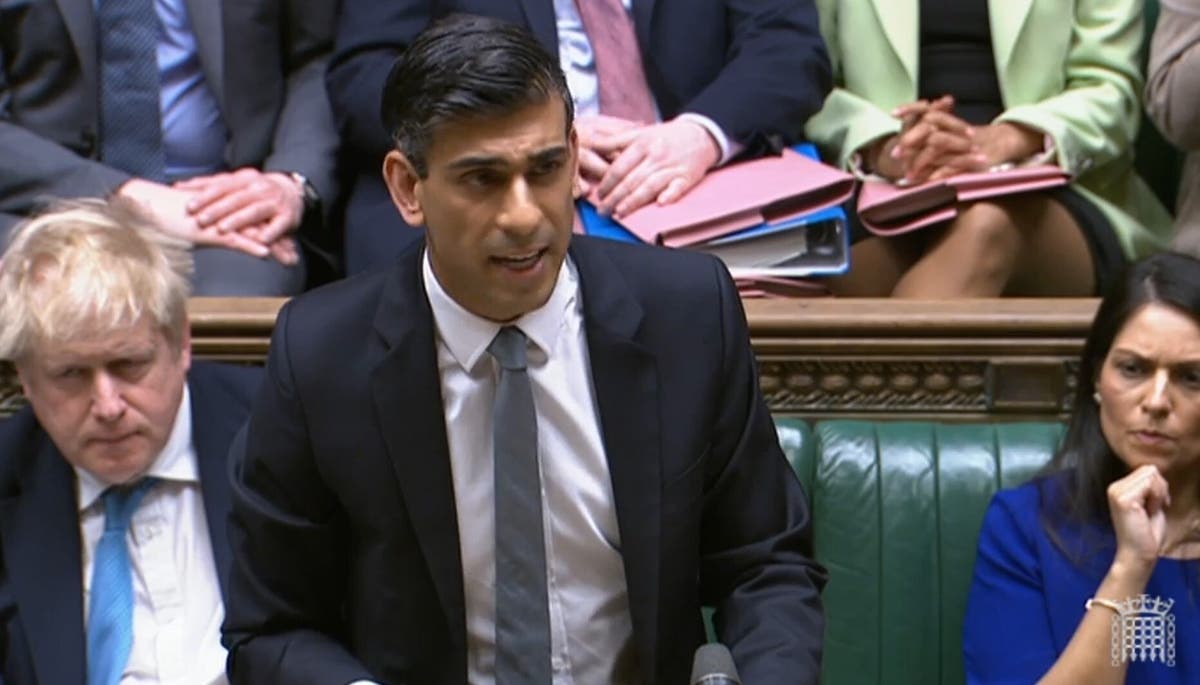 Britain is heading for its biggest fall in living standards since the 1950s this year, despite a mini-budget in which Chancellor Rishi Sunak slashed £ 330 off national insurance for the average worker and took 5p off the tax on a liter of petrol.

The chancellor also promised a 1p cut in the basic rate of income tax in 2024, in what was immediately denounced as a pre-election bribe.

But he did nothing for the poorest, who see welfare benefits far outstripped by inflation which is expected to peak close to 9 per cent this year.

And he rejected opposition calls for a windfall tax on the bumper profits of North Sea oil and gas companies to pay for a cut in VAT on energy prices.

The morning after the statement, economic think tank the Resolution Foundation warned around 1.3 million Britons will be pushed into absolute poverty by the cost of living squeeze.

An offer of zero-VAT rating for green home improvements, including the installation of solar panels and heat pumps, fell far short of the immediate help sought by households facing an average £ 600 leap in domestic gas and electricity bills in eight days’ time and a further hike of similar magnitude in the autumn.

Martin Lewis, who runs the Money Saving Expert website, said his head “sunk” when he heard the chancellor’s “limited” measure on energy, adding: “It will not impact the majority of households who will see a likely £ 1,300 average increase in year-on-year bills by October. ”

The government’s official forecasters, the Office for Budget Responsibility, said that the impact of rising prices will mean real household disposable incomes per person falling by 2.2 per cent in 2022-23 – “the largest fall in a single financial year since ONS records began in 1956-57 ”.

The OBR said that changes announced in Mr Sunak’s spring statement – billed by the Treasury as the largest tax cuts for a quarter of a century – did no more than remove one-sixth of the tax hikes he had previously announced since becoming chancellor in 2020.

The respected Institute for Fiscal Studies think tank said that the total impact of changes introduced by Mr Sunak will see almost all workers paying more tax on their earnings in 2025.

Sunak was “giving with one hand on tax, having previously taken away with the other”, said the IFS, as unexpectedly high inflation saw his earlier freeze on income tax thresholds turn into a massive revenue generator, dragging many more workers into higher rates and more than paying for the spring statement giveaways.

The chancellor won room for maneuver thanks to a £ 15bn windfall from additional tax receipts, as well as £ 5bn from increased student loan repayments, giving him the flexibility to pre-announce a cut in the basic rate of income tax without breaking his rules on debt and borrowing. The new 19p basic rate will be the lowest since the First World War.

But the OBR warned that uncertainties resulting from the Ukraine war and volatile energy prices meant that his calculations “could be wiped out by relatively small changes to the economic outlook”.

And Mr Sunak himself warned MPs: “We should be prepared for the economy and public finances to worsen, potentially significantly.”

IFS director Paul Johnson said that Mr Sunak’s changes will make the tax system “both less equitable and less efficient”, increasing the gap between high-taxed earnings from work and lower taxes on pensions and unearned income.

And he said that the chancellor left cash settlements for public services unchanged, meaning that the real-terms value increases announced in the autumn Budget for everything from the NHS to schools will be eroded by around 10 per cent.

But most significantly, he said that the chancellor had “done nothing more for those dependent on benefits, the very poorest, besides a small amount of extra cash for local authorities to dispense at their discretion”.

Mr Johnson warned: “Their benefits will rise by just 3.1 per cent for the coming financial year. Their cost of living could well rise by 10 per cent. ”

Trussell Trust chief executive Emma Revie, said the decision would mean “many more people will have no option but to use a food bank”, while housing charity Crisis said many people would be “pushed into homelessness” by their inability to meet bills.

With pay expected to lag behind soaring inflation in many cases, the IFS calculated that average wages will reach £ 31,400 in today’s prices in 2027 – some £ 11,000 lower than they would have been if trends from before the 2008 financial crash had continued.

Labor Treasury spokesman Pat McFadden said Mr Sunak had “left households and businesses to fend for themselves in the middle of a devastating cost-of-living crisis”.

Mr McFadden said: “Rishi Sunak is raising taxes again and again, only to offer crumbs just before an election. This is a cynical chancellor who is asking struggling families to pay for the Tory election campaign. The British people will see through it. ”

In a statement to the House of Commons hastily rewritten after the Ukraine war threw his plans into disarray, the chancellor acknowledged that the UK’s decision to impose sanctions on Vladimir Putin will not be “cost free” for Britons.

But he said: “This statement puts billions back into the pockets of people across the UK and delivers the biggest net cut to personal taxes in over a quarter of a century.

“Cutting taxes means people have immediate help with the rising cost of living, businesses have better conditions to invest and grow tomorrow, and people keep more of what they earn for years to come.”

The Treasury said that the increase in the NICs threshold for employees will offset in full for 70 per cent of workers the cash they stand to lose from the introduction of Mr Sunak’s 1.25 per cent health and social care levy in April, without reducing the £ 12bn additional funding for the health and care system it was planned to raise each year.

Meanwhile, the 5p cut in fuel duties will save an average one-car family around £ 100 a year, at a cost of £ 2.4bn. But the saving will end in March next year, when duties are due to jump by 6p in a single leap.

The chancellor also doubled to £ 1bn a household support fund for councils to make discretionary grants to residents in financial distress.

“Rishi Sunak is trying to swindle the British public by burying the true cost of his disgraceful tax hikes,” said Davey. “He has insulted millions of squeezed families across the country by thinking he can hide this in the small print.”

Using a forecast of future energy prices, its first since the Russian invasion of Ukraine, the OBR now expects the price cap on energy bills will rise by a further £ 830 in October.

This, and other factors, mean that the cash households have after paying for essentials will drop by 2.2 per cent, the OBR said, the largest fall in living standards in a single financial year since records began in 1956.

For now, the cut to fuel duty, the energy bill rebate and raising the threshold for NICs – so that earners will keep an extra £ 3,000 before they pay the levy – will only offset half the cost of rising energy bills.

Meanwhile, by raising the threshold by £ 3,000, the chancellor has raised questions about how enough funds will be generated to address the chronic NHS backlog and tackle the social care needs of an aging population.

The Independent understands that the £ 12bn a year the levy was meant to raise will be ringfenced by the Treasury up to 2024-25, the end of the spending review period. It is not yet clear what will happen after that time.

But there are other, non-energy, inflationary pressures on consumers, too, including food, goods and services. These account for over half of total inflation. This means the government’s efforts will only offset a third of this overall fall in living standards, the watchdog said.

The economic shock is so severe that inflation will dampen consumers’ appetites to buy goods and services, eating into economic output.

It trimmed its forecast for economic output 2022 from 6 per cent at the Budget least year, to 3.8 per cent. The pattern continues next year, too, with expectations dropping from 2.1 per cent, to 1.8 per cent growth in 2023, as “the cost-of-living squeeze continues, some fiscal support is withdrawn, and monetary policy tightens further”, it said .