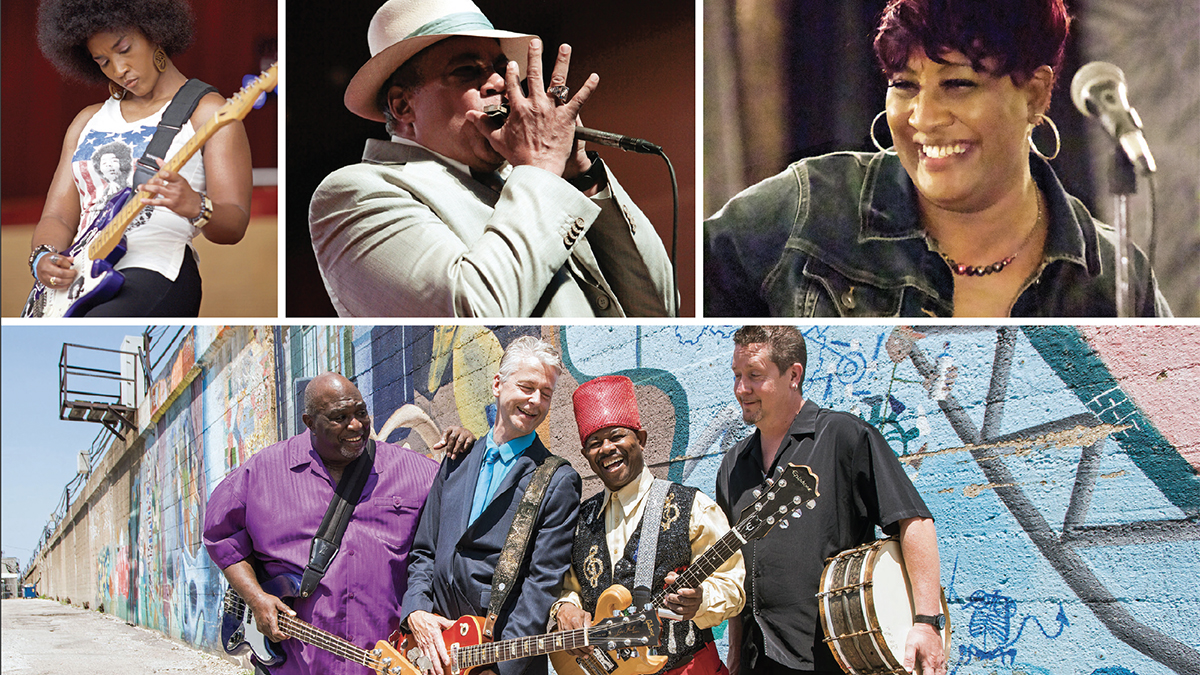 This year, the Chicago Blues Festival will again include shows on the west and south sides as well as in Millennium Park. The agendas of these neighborhood shows are more ambitious, though, than just getting a collection of locally rooted musicians onto the same stage. Both are presented in coordination with larger projects intended to spur economic and cultural revitalization of their communities.

Saturday’s Soul City Blues event (part of the Taste of Chicago preview Taste of Austin) is linked to the Soul City Corridor project. Under the auspices of Mayor Lightfoot’s INVEST South/West program, the Soul City Corridor initiative will spend $21 million on improvements to the stretch of Chicago Avenue from Austin to Cicero, intended to create a greener, safer, more beautiful, and more pedestrian-friendly street.

Bronzeville Blues is produced by the Department of Cultural Affairs and Special Events (DCASE) and the Bronzeville Blues Collaborative, a collective of nonprofits whose mission is to celebrate and revitalize the community’s blues heritage. A major participant in the collaborative is the Mojo Museum project, led by Muddy Waters’s great-granddaughter Chandra Cooper—it’s working to rehabilitate Waters’s old home at 4339 S. Lake Park and turn it into a blues museum.

In an acknowledgment that the contemporary blues scene actually consists of several different fan bases that don’t necessarily overlap, the Blues Festival planning committee has crafted lineups drawn from various “schools,” so to speak, and included some artists who make it a point to defy genre expectations entirely and go their own way.

At the Soul City event, 86-year-old Mary Lane, whose Chicago career extends back to the late 1950s, represents the traditionalist camp. (She’ll also be honored at Pritzker Pavilion on Sunday afternoon with a tribute during the Women in Blues showcase.) Lil’ Ed & the Blues Imperials, despite their well-earned “houserockin’” reputation, are in their own way almost as rootsy as Lane: Ed Williams learned his searing slide-guitar style from his uncle, J.B. Hutto, himself a disciple of the legendary Elmore James. Demetria Taylor, daughter of guitar master Eddie Taylor, sticks close to the shuffle-oriented postwar sound he helped codify, but like most of her generation she gooses it with more contemporary soul and R&B. James “Tail Dragger” Jones is a gutbucket-raw Howlin’ Wolf stylist known for his witty, aphoristic lyrics and sometimes provocative stage shows. All four artists have deep roots in the community, but only Dragger has remained a steady presence on the neighborhood circuit.

The Soul City acts who’ll probably be most familiar to west siders are Joe Pratt & the Source One Band (who’ve backed such soul and soul-blues stalwarts as Artie “Blues Boy” White, Tyrone Davis, and Otis Clay) and vocalist Mzz Reese, a disciple of the late Denise LaSalle who works at west- and south-side neighborhood venues when she’s not doing more widely publicized shows at clubs like Buddy Guy’s Legends.

Taste of Austin featuring Soul City Blues
This event is one of the city’s series of Taste of Chicago previews as well as part of the Chicago Blues Festival, which runs from Thu 6/9 through Sun 6/12. In order of performance, the day’s lineup is Mzz Reese, Joe Pratt & the Source One Band, Mary Lane & the No Static Blues Band, Tail Dragger, Demetria Taylor, and Lil’ Ed & the Blues Imperials. Sat 6/11, noon-8 PM, 5720 W. Chicago, free, all ages

Lil’ Ed Williams grew up around Lake and Paulina and got his start in clubs like Big Duke’s Blue Flame at Roosevelt and Washtenaw and the Riviera at Lake and Kedzie (formerly Silvio’s, a Howlin’ Wolf stronghold). He’s looking forward to the Soul City gig, but he’s hardly sentimental about his west-side roots.

“I haven’t played on the west side [for] 30 years,” Williams says. “It’s a whole different world now. I go where I used to live, I don’t know nobody. It’s gone. This is a whole new generation. But in some ways, I’m thinking, well, maybe this is something they need. [With] the pandemic, and the way things are happening, I’m sure a lot of people over there’s got the blues!”

Williams also has little nostalgia for the “good old days” of the west side as a roots-blues stronghold. “It was always hard for the blues on the west side,” he explains. “Years ago, it took my uncle to come in the clubs and actually get on the people to clap for us, you know? And that was back then! The two main cats were Bobby Bland and B.B. King. And if you wasn’t doing that back then, you wasn’t probably hittin’ on too much.”

That’s not to say he’s worried about the reception he’ll get at the Soul City show. He’s used to winning over crowds with his high-octane showmanship and fretboard prowess. “There will be people out there that really want to get into the music,” he says. “There is always a few Blacks who come in, like, Rosa’s or the Kingston Mines and go, ‘Ed, you’re the greatest.’ And I’m getting a lot of youngsters walking up, goin’, ‘Wow, that’s a great sound you got. That’s a good thing you’re doing with that slide, I’m loving it.’ So we got a variety of different music going, and I think everybody’s just trying to get in the groove. I think it’s going to be really nice. We can do it!”

Mzz Reese moved to Chicago from Jackson, Mississippi, when she was a teenager, and for her this gig is literally a homecoming. “I will be exactly one block over from where I grew up at,” she says. “So it’s really, really ‘back home’ for me. The very lot they’re setting the stage up at is where we once had the neighborhood carnivals, where we played softball against the other blocks, where I had several fights and also got my first boyfriend.”

She remembers the area in those days as a vital community with a thriving social and cultural life. “They’re going to set the stage up right across the street from Mt. Olive Church,” she says. “Mt. Olive used to be the old Chateau, before Pastor [James] Bass bought the place and Mt. Olive moved in there. And it was so many nice clubs up and down that avenue. You had Chicken George, you had Club Eloise, the Chateau before it became Mt. Olive, Godfather and Shorty’s club was up the street, and further down to Cicero towards Lake Street, you had Shaw’s Corner—nothing but clubs all through there.”

It’s not like that anymore, of course, but the west side still has a healthy contingent of working musicians. And Reese is convinced that the clubs can come back, if revitalization projects such as the Soul City Corridor come to fruition and the right entrepreneurs negotiate the expensive bureaucracy required to get the necessary clearances (“It’s hard, for some reason, for African Americans to get a title or license to keep venues going on the west side”). The resulting combination of community support and hipster cred, which once supported venues like Eddie Shaw’s 1815 Club on Roosevelt, could make the west side a blues nexus not just for the city but also for the country or even the world.

The Bronzeville Blues event promises to be even more varied than Soul City. Bassist Freddie Dixon and his Chicago Blues Allstars invoke the spirits of Dixon’s father (the late Willie Dixon) and of Muddy Waters, who recorded many of the elder Dixon’s best-known compositions (“I’m Your Hoochie Coochie Man,” “I’m Ready”). Twenty-eight-year-old Michael Damani, a veteran of Dixon’s Allstars, modernizes that sound with a high-energy guitar style that recalls Otis Rush and Magic Sam; trombonist Big James Montgomery and his Chicago Playboys update the tradition with propulsive post-James Brown funk; guitarist Vance Kelly and his Backstreet Blues Band are one of the most eclectic acts on the Chicago scene, with a repertoire that includes postwar blues chestnuts, contemporary soul-blues hits, 60s and 70s teen dance classics, and funk, soul, rock, and pop standards (“Purple Rain” is a perennial showstopper).

Guitarist Melody Angel is probably the most aggressively forward-looking artist on the bill: she updates the blues and old-school rock ’n’ roll with the ferocity of modern hard rock, and also incorporates generous helpings of R&B, hip-hop, and ballad-heavy neosoul. The day culminates with a tribute to Muddy Waters led by Waters’s son Mud Morganfield and harmonica ace Billy Branch, backed by some of Chicago’s best-regarded roots-blues stylists.

The homecoming theme that Mzz Reese mentions also resonates for Branch, who was mentored in the 1970s by the likes of Junior Wells and James Cotton in such fabled Bronzeville clubs as Theresa’s and the original Checkerboard Lounge. In his case, though, the gig is more a continuation than a return. “Throughout my career,” he says, “I always maintained a presence on the south side. Even though they weren’t [all] located in what you’d consider Bronzeville proper, I was always consciously trying to maintain a presence of the blues on the south side.”

Like Ed Williams, Branch recognizes that the kind of blues he plays has fallen out of favor among mainstream Black audiences, but he’s never let that deter him. “I like to say we baptized our own people!” he says. “Sometimes we tricked ’em into liking blues, because word would get around that there’s these hot young cats playing blues. And music, if it’s good, you can’t deny it. It doesn’t matter what genre; good music is good music. So ultimately what we did, in some instances, the people at first weren’t very warm to the idea of the blues, but we would convert them. Because we were good.”

Branch hopes that events such as Bronzeville Blues can accomplish such conversions on a larger scale. “I think it’s really important to have this showcase in Bronzeville, where the blues used to flourish and now it’s virtually nonexistent,” he says. “It’s very important that the Black community starts to really embrace this great, dynamic, vibrant living cultural legacy. Having the Bronzeville festival, the Mojo project restoring Muddy’s house into a museum—those are baby steps that are long overdue. The city needs to actively, fervently get engaged in preserving and promoting the blues culture.”

For Melody Angel, who lives in Bronzeville, this event—like the blues itself—is more about looking forward than looking back. “I just think this is good for the future, to show that it’s a big part of our future as a generation, and that it’s still very relevant,” she says. “I think it’s pretty great that we have older people performing and younger people, to prove that the blues hasn’t gone anywhere. People really get confused about the blues, like it’s ever been one sound. And it’s never been one sound. It’s just a continuation of people using their own style to perform.”

Angel sees a lot of potential in the ancestral links between the blues and hip-hop. “A lot of hip-hop artists today use live bands,” she points out, “and they all use, like, blues and funk and jazz to create amazing live shows. So it would have been nice to correlate that. We’ll have opportunities, I’m sure, to get that going.”

Angel released her new album, Foxy, earlier this week. She links her music to her social justice work, which includes founding and serving as president of the Black Revolutionary Collective, which combines activism with education and human services in an echo of the agenda Fred Hampton pursued with the Black Panthers in the 1960s. She embraces the blues’ hard-won celebration of life (as poet Toi Derricotte puts it, “Joy is an act of resistance”) and the commitment to social change exemplified by the likes of Gil Scott-Heron and Nina Simone. “I have to be true to myself,” she says. “I’m not going to pretend to be something I’m not.”

Muddy Waters and Howlin’ Wolf were iconoclasts in their time. Seen in that light, Angel’s words embody the blues tradition as authentically as any of the music being played at the 2022 Chicago Blues Festival.