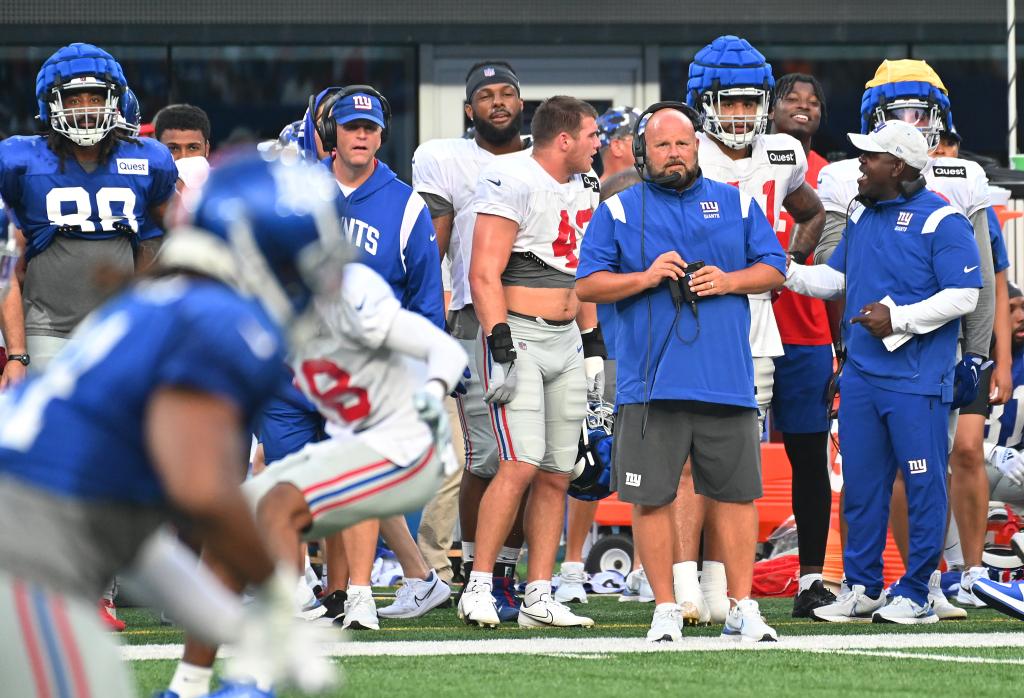 The drive from the Quest Diagnostics Training Center to MetLife Stadium takes only two or three minutes, and yet that is when a thought hit Brian Daboll hard late Friday afternoon. He saw the people in the parking lots dressed in LT, Eli and Saquon jerseys, and allowed himself a momentary break from the daily grind.

He was the head coach of the New York Giants, about to lead an NFL team into an NFL stadium for the first time.

“Just driving in and seeing the fan base out here and you’re like, ‘It’s a pretty cool history and a humbling moment for me to be in this position,'” Daboll told The Post. “To see all the fans out there for the first time knowing that you’re their head coach, and then to stand on the sideline — yeah, it was a bunch of firsts. Even thought it was just a practice, a bunch of firsts.”

It might be silly to attach any significance to a Blue-White scrimmage that doubled as a Fan Fest at MetLife. Some 26,000 people gathered to watch Daniel Jones do some good and some not-so-good things against his own defense, and maybe half of those fans were just looking for something to do while letting the traffic ease up before their late-night drives to the Shore.

But they showed up to watch something fairly meaningless that was pretty damn meaningful to their rookie head coach. At 47, Daboll had never run a team at any level. He started out as a volunteer assistant at William & Mary, and worked his way onto the staffs of Bill Belichick and Nick Saban before riding his success as Bill’s offensive coordinator into the big job with the Giants.

“I’ve done this for 25 years,” he said in June, “so it’s not like I was a coach for five years and got on a hot swing. This is 25 years in the making, a lot of good ups and some downs that you learn from. A lot of ‘nos,’ a lot of not getting jobs. So every day I thank my lucky stars that … I’m the head coach of a football team, let alone the New York Football Giants. What an honor that is.”

And that honor made a mark on him before this intrasquad scrimmage. After he was done coaching on the field and fielding questions in the press conference room, Daboll was walking down the MetLife corridor when asked if the occasion meant anything to him. He paused, and appeared on the verge of getting emotional.

“It’s hard to put into words,” he told The Post. “It was a different feeling walking into the stadium for the first time as a head coach, walking into the head coach’s office instead of a big room with the assistants. I kind of sat there before the scrimmage. It’s humbling. It’s very humbling. I understand the role, and I just want to do a really good job for our organization and for our fan base.

“But it was certainly a pretty cool moment for me.”

Nobody knows how Daboll will be as a head coach, just as nobody knew how another rookie, Joe Judge, would be the first time around. Judge was not a disaster — he just authored his own disastrous ending. But even an amateur detective could scan recent quotes from the holdover Judge players and determine that they prefer (so far) the way Daboll is running this operation, from his energy to his methods of communication to the freedom he’s giving his outside playmakers to, you know, make plays.

One Giants source with deep, long-standing ties to the organization said, “The whole building loves Daboll.” Asked if it seemed the majority of veteran Giants are making it clear that they appreciate Daboll’s management style to Judge’s, the source said: “One hundred percent. They’re not making any attempt to hide that.”

Tyrod Taylor, a 12-year veteran who wasn’t a Judge player, but who has seen a ton of coaches come and go, said Daboll has impressed him every day with his command of the locker room and meeting rooms and with the way he has earned the team’s respect.

“He does a great job of keeping everyone involved, but also not withholding information,” Taylor said. “He’s straightforward with us.”

Of course, that player connection won’t matter if it doesn’t show up on the scoreboard. Given that the Giants have lost 10 or more games in five straight seasons, Daboll clearly has to teach his team how to win. In order to do that, he said, he has tried to create an ultracompetitive environment in every aspect of his program “whether that’s in the cafeteria, at the walk through, in the locker room. Everything’s about competition. … We’re committed to a process of trying to improve and do things a certain way.”

Coaches get so locked into that process that they don’t often break away and appreciate the small things for the big things they really are. But Friday night, during an early August drive that didn’t even cover a mile, and in the short time he spent in the head coach’s office before a Fan Fest scrimmage, Brian Daboll allowed himself to feel something he’d never felt in his football life.

That should be noted… just in case he becomes the next Tom Coughlin or Bill Parcells.