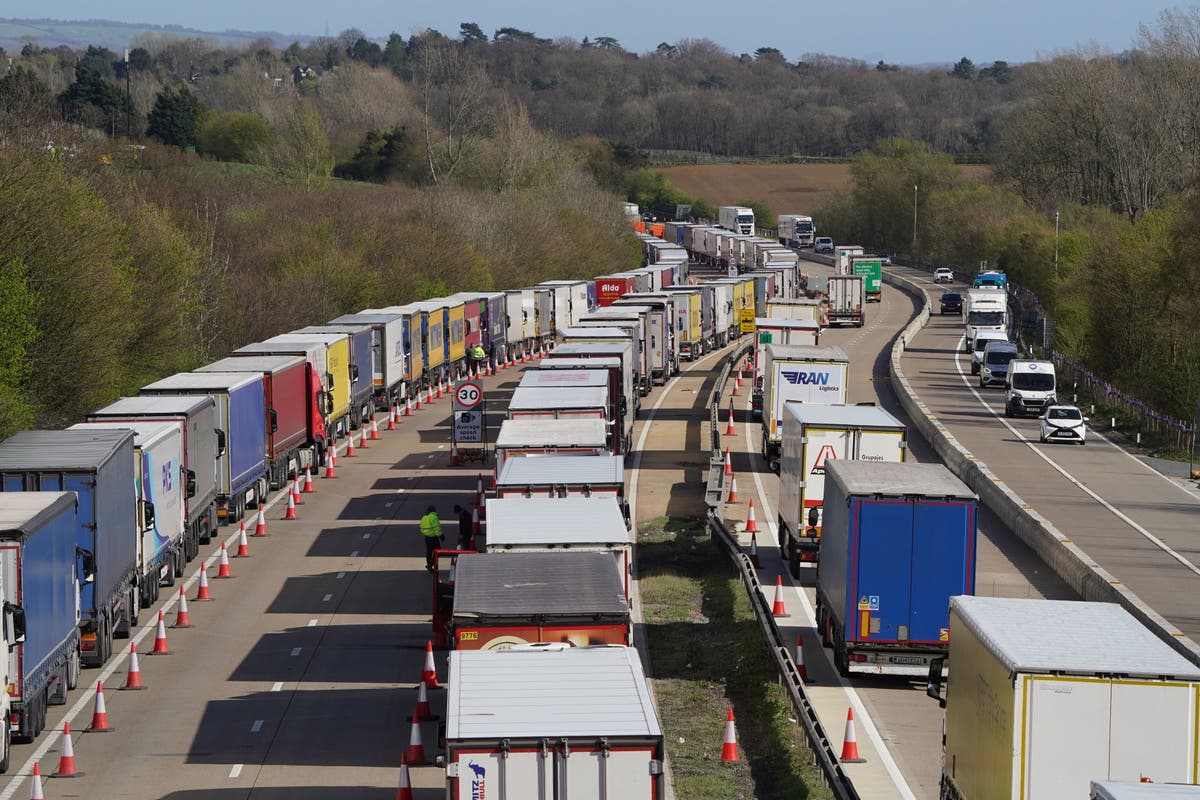 Intense traffic congestion around Dover is partly down to “Brexit scenarios”, according to the head of the British Ports Association.

Chief executive Richard Ballantyne said the gridlock was mainly down to the suspension of sailings by P&O Ferries after it sacked 800 workers – but pointed to Brexit bureaucracy as another factor.

“There’s still congestion,” he told Sky News on Saturday. “P&O Ferries is out of service at the moment, which is probably the main cause of all the congestion – coupled with one or two other little incidents, and other Brexit scenarios.”

Mr Ballantyne added: “We’re hoping things clear as soon as possible, but I appreciate for those stuck in queues at the port and Eurotunnel it must be very frustrating.”

Britons trying to travel to France over Easter have been advised to bring food and drink for expected delays, as lengthy queues continue around Dover.

The congestion in Kent has mainly blamed on the shortage of ferries caused by the suspension of sailings by P&O Ferries following the controversial mass sacking of seafarers without notice.

But problems with a key IT system for post-Brexit customs checks are also contributing traffic chaos around Dover, where thousands of commercial lorries have been stuck in queues.

The Road Haulage Association (RHA) said the HMRC was “continuing to have issues” with its new GVMS system for customs declarations needed by hauliers following Britain’s exit from the EU.

Drivers lack scannable barcodes needed for the rapid check of lorries at ports including Dover, and temporary workaround could be in place until Monday, the RHA said.

A message on the HMRC site says: “We are undertaking robust investigations into our systems to address the underlying issues behind this outage. We will provide a further update by noon on April 11. ”

Hauliers have said it has been taking 15 to 20 minutes for each driver to clear checks needed since full customs controls came into force at the beginning of January.

A 23-mile stretch of the M20 has been closed to store queues of lorries heading for Dover as part of Operation Brock, while the A20 Roundhill Tunnel has also been closed under the TAP traffic scheme.

Dover County Council has said it is ready to declare “a major incident” should the traffic disruption around Dover continue this weekend.

Mr Ballantyne said both Operation Brock and Operation Tap were helping to prevent a “complete breakdown” in Dover town – as well as keeping the port and Eurotunnel operational.

“As frustrating as it is for people in queues, it is actually working,” said the ports chief on the traffic management plan.

Last month The Independent revealed that the government is exploring a delay to new controls on imports set to come in July 2022 because of growing alarm over the cost of living crisis.

The Cold Chain Federation has warned of a potential “collapse” in trade among “small volume” British businesses if the new Sanitary and Phytosanitary (SPS) inspection of imported agri-food and plant products are imposed in the summer.