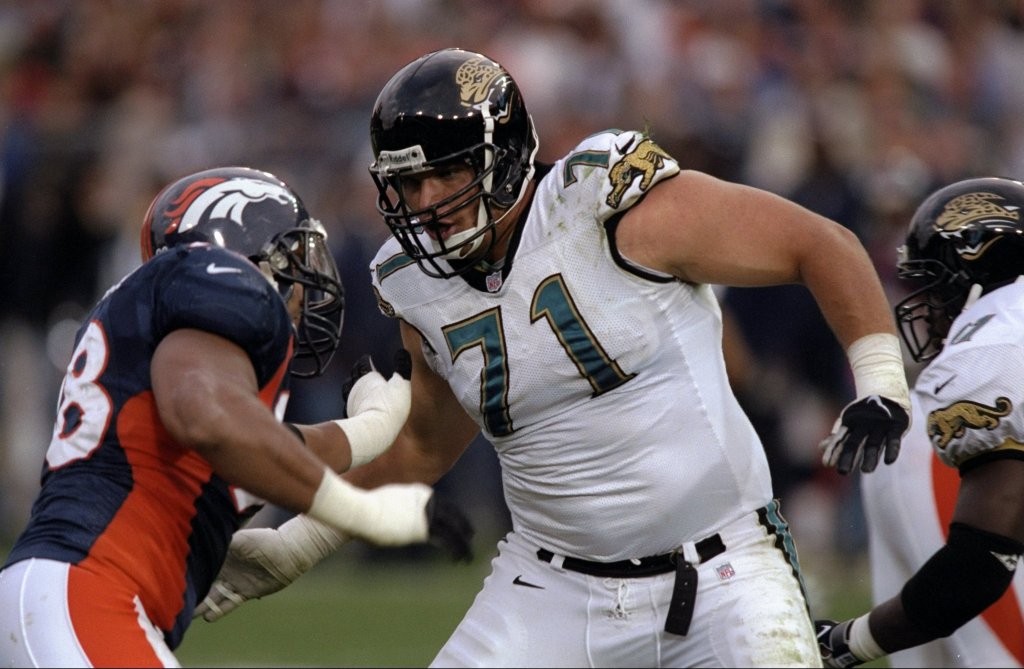 The list of Colorado high school players inducted into the Pro Football Hall of Fame is short: Dutch Clark and Jack Christansen, who grew up in Fowler and Canon City, respectively.

The list of Jacksonville Jaguars players in the Hall is even shorter: None.

That changes Saturday when Tony Boselli, who grew up in Boulder, becomes the third Coloradoan and first Jaguars player inducted along with the Class of 2022 in Canton, Ohio.

“That’s a big deal to me,” Boselli said. “Boulder was a great place to grow up as a kid because everything was outdoors, which fit my personality of wanting to do stuff and stay involved.”

Clark was inducted in 1963, followed by Christansen in 1970. It only feels like Boselli’s wait has been that long — he was a six-time Hall finalist before he finally got the “knock” when Anthony Munoz, whom Boselli considers the best left tackle of all time, traveled to Jacksonville to welcome him to “The Gold Jacket Club.”

Boselli, a left tackle in the NFL, graduated from Fairview High in Boulder and moved onto USC, where he was a three-time, first-team All-America.

During an interview with The Denver Post, Boselli went down memory lane.

Growing up in Boulder

The Boselli family moved to Colorado when Tony was 2 years old. His uncle, who was 22 years older than Boselli’s dad, Tony, Sr., bought a McDonald’s franchise in Thornton and hired Tony, Sr., to be the manager. By the time Tony, Sr., retired, he owned more than 20 McDonald’s locations.

Boselli: “I would have thought of us as middle class growing up. We took one vacation a year but it was never on a plane — everybody got in the car and we drove. But we had a small boat and would water ski and hang out most weekends and snow-ski in the winter. My Dad was a super-hard worker. Hard work was expected. That’s what you did. That was from Day One. I would do landscaping outside the (locations) and when I was probably 12 or 13, I started working in the back in the summer because if I wasn’t playing a sport, you were expected to work. Before my senior year of high school, I repainted seven McDonald’s. Minimum wage was $3.35 and I thought it was the most money in the whole world. And they weren’t paying me a dollar more than minimum wage — no chance.”

Tony, Sr., died on May 31, 2021 due to melanoma. But before his passing, he taped a congratulatory message to his son in the event he reached the Hall of Fame.

Boselli was always a “really big” kid, which was problematic when he signed up for football at age 8. But his father fudged the sign-up forms and Tony was going against 12 years old and would have a dot on his helmet meaning he couldn’t touch the football. He entered high school wanting to play quarterback. That quickly changed.

Boselli: “I got moved to offensive tackle before my junior year and I was successful but I didn’t start both ways. My goal as a senior was to be all-state because I wanted my picture on the wall at Fairview. I had a good senior year and could dominate when I wanted to. The last game of the year, I had 18 tackles as a defensive lineman and that was a moment when I said, ‘You have more in the tank than you think.’ Everything fell into place.”

Boselli started receiving college calls and was enamored with USC because his family was taking annual vacations to Newport Beach, Calif. His final list of schools was USC, Notre Dame, Arizona State, Stanford and Michigan State. Staying to play for the hometown Buffs wasn’t a consideration.

Boselli: “(CU) had no chance. I didn’t want to stay home. I didn’t want to hang out at the same places I hung out in high school and run around and do the same things. Coach (Bill) McCartney was great, the program was great and people were shocked I was leaving. I wanted to go to either Notre Dame or USC. When it came down to booking my trip to Notre Dame and they said, ‘We’re not going to offer you a scholarship.’ I started hating Notre Dame at that moment. I was scheduled to visit Stanford and Arizona State, but I canceled after visiting SC. I landed in Los Angeles for my visit and it felt like home. We didn’t have as much success as I would have liked, but I wouldn’t trade the experience for anything.”

Boselli was the Trojans’ backup left tackle in 1990, but didn’t play a snap and used a redshirt. He was a four-year starter. In 1995, he was the first-ever draft pick in Jaguars history.

In the Jaguars’ second season (1996), they won their final five regular-season games to finish 9-7 and secure the AFC’s fifth playoff seed. In the wild-card round, they traveled to Buffalo as an 8 1/2-point underdog and won 30-27, a game that went a long way towards Boselli’s Hall selection because he contained Bruce Smith. A week later, the Jaguars flew to Denver as a 12 1/2-point underdog to the 13-3 Broncos. It was a homecoming for Boselli. The team he cheered for as a kid. The club his father still rooted for. The Jaguars trailed 12-0 early but rallied for a shocking 30-27 win.

Boselli: “The Broncos were the best team. I remember flying out there on Friday and I started to get sick. We land and I have a splitting headache. I couldn’t see my parents, I couldn’t have the lights on in my room and I felt like my head was going to blow up. Got to the stadium (the next day) and still sick. Got four IV bags before the game and vintage (coach) Tom Coughlin, and this is what I love about him, he came up to me and said, ‘Don’t think for a second you’re not playing.’ I’m like, ‘Gotcha.’ Hindsight 20-20, it was altitude sickness … for a kid from Colorado. I played good that day against Alfred (Williams), but if you put every variable into that game and what it meant, it’s probably my favorite game of all time.”

Boselli was on a Hall of Fame trajectory entering the 2001 season. He missed only seven games in his first six years, played in two AFC title games (losses to New England and Tennessee) and was named to five Pro Bowls and three first-team All Pro teams. Boselli sustained a torn ACL and missed the 1999 playoffs, but played every game in 2000. He played three games in 2001 before his shoulder gave out.

Boselli: “When I had my ACL in the last (regular season) game in 1999, my shoulder bothered me a little bit and felt loose, but I purposely didn’t get it looked at because I was getting my knee worked on and I wasn’t t going to do both (surgeries). I showed up in 2001 and two weeks into camp, something that would typically show up at the end of the season was now showing up in camp. Torn right labrum in my shoulder. I played the Steelers in the opener and played well and we won, but my shoulder just didn’t feel great. My left shoulder was popping and in and out and my right one was hurting. After the first four games, I couldn’t get a cup of coffee up to my mouth. I got the surgery, did the rehab and it got worse. I tried for two years to come back and it was clear it was over.”

Nearly 21 years after he played his final game and 19 years after his retirement, Boselli will be introduced by former teammate Mark Brunell on Saturday. Boselli’s 91 career games are tied with George Conner and Bob Waterfield for No. 271 in most games played by a Hall of Famer; his short career was similar to Broncos running back Terrell Davis (78 games).

Boselli: “It’s one of those things, my approach was and I told my wife, ‘If I don’t make it, I have to be OK.’ Every year got harder and harder because you get to the point where it might not happen and it’s happened — it’s rare, but guys have been finalists and didn’t get there. I literally spent time on my own to get my mind right because I couldn’t allow not making the Hall of Fame make me feel bitter or feel less because who wants to live life that way? I would be disappointed and wouldn’t like it, but I would be OK.”

Boselli, 50, and his wife, Angi, have five children ranging in age from 12-24 and the family will be joined in Canton by family members and former teammates and coaches.

Boselli: “You don’t get to this point without great people in your life.”