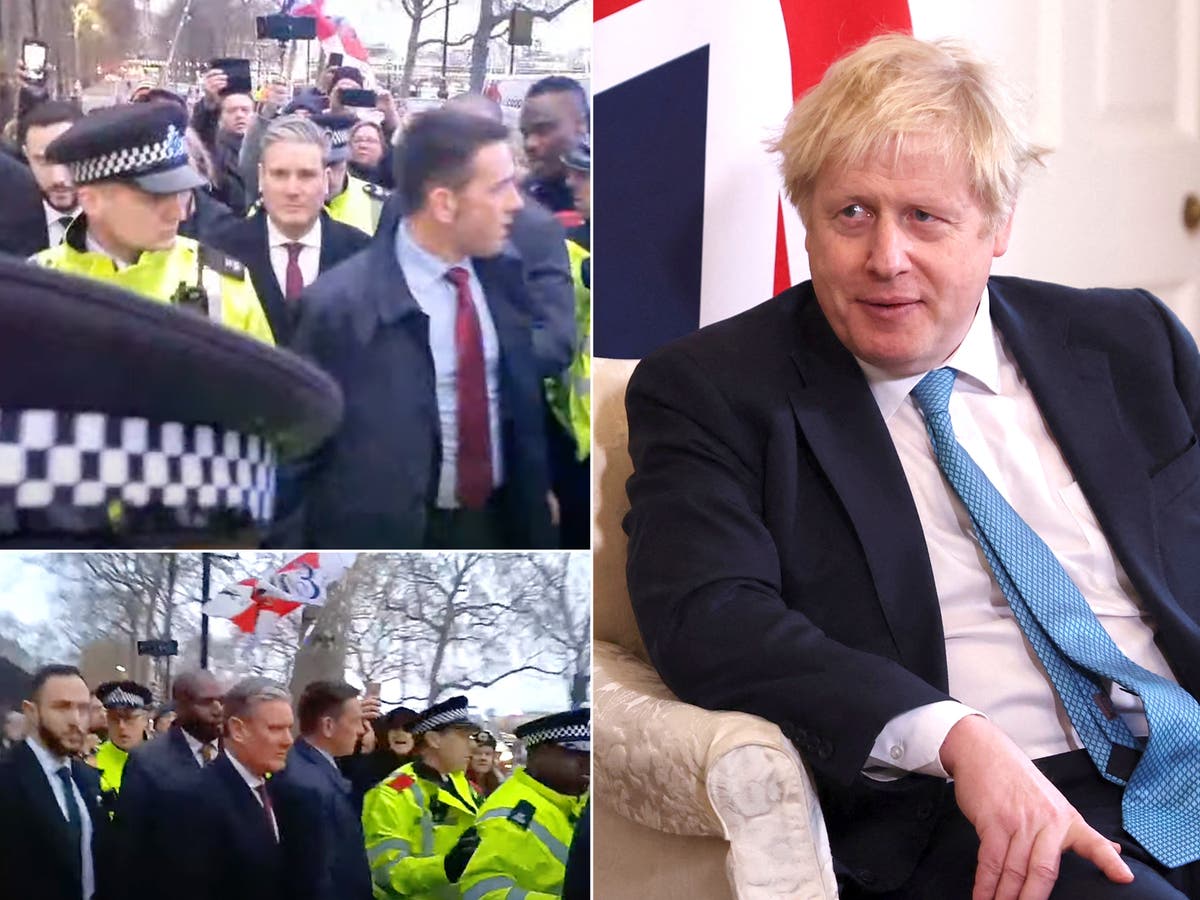 Leveling up secretary Michael Gove has urged people to “move on” from the row over false claims Boris Johnson made about Sir Keir Starmer’s failure to prosecute peadophile Jimmy Savile.

It comes a day after Sir Keir was rescued by police after a crowd heckled him outside parliament, including slurs about Savile and the Labor leader being a “traitor”. Asked about the situation on Tuesday, Mr Gove described it as a “uniquely sensitive issue” but said only “the sooner we move on the better.”

Earlier, Commons speaker Sir Lindsay Hoyle intervened to warn Mr Johnson that his “words have consequences”, branding the remarks “inappropriate”. Senior Conservative MPs have also asked the PM to apologize, but Downing Street insisted earlier this would not happen.

Nicola Sturgeon, Scotland’s first minister, today described the abuse Sir Keir suffered as “sickening”, claiming it “is a reflection of the toxic cocktail of conspiracy theories, smears and lies that swirl around our politics now”. She added the PM had “weaponised” such issues and urged him to “fully, unreservedly and unequivocally apologize”.

The prime minister has been accused of having “complete disregard for standards in politics” as he furthered Mr Spencer in his office as the lead of the Commons, despite allegations of “blackmail” against MPs.

In his new role, Mr Spender will be acting as a custodian of the Westminster complaints system as well as for upholding the rights and interests of backbench MPs.

Mr Spencer is also currently under investigation for alleged Islamophobia. He has been accused of telling Tory MP Nusrat Ghani that she was demoted from a ministerial position because her “Muslimness” made others uncomfortable.

Welcome back to The Independent’s live blog on the UK politics for Wednesday, 9 February.

We’ll be pausing live updates for the rest of the night, but my colleagues will be back with more live coverage tomorrow morning. Thanks for following with us today.

You can find all of The Independent‘s latest articles on UK politics here.

Or else keep scrolling to catch up on the day’s events below:

A legal campaign group has claimed that the list of companies given “VIP” treatment for Covid contracts is even larger than Boris Johnson’s government has admitted, Adam Forrest reports.

In November, the government shared a list of 50 companies fast-tracked for contracts to supply personal protective equipment (PPE) through a “High Priority Lane”.

The so-called “VIP lane” was set up at the start of the pandemic and allowed MPs, ministers and senior government officials to pass on offers of help to a special email inbox.

The Good Law Project has said it had been leaked internal documents showing that another 18 companies – awarded almost £ 1bn in PPE contracts between them – were also referred to as “VIPs”.

A Department of Health and Social Care (DHSC) spokesperson denied that these companies had been referred to government officials through the High Priority Lane route.

But Jolyon Maugham, director of the Good Law Project, said it was “abundantly clear” from both a DHSC document and internal emails that these companies were treated as VIPs in the process of handing out contracts.

Martin Lewis has accused Kwasi Kwarteng of “denigrating the experience of fraud victims” with his “outrageous” defense of Boris Johnson’s false claim that crime had fallen under his leadership.

Amid the fallout from Sue Gray’s Partygate update, the PM told the Commons that crime had fallen by 14 per cent – a claim denounced as “misleading” by the head of the UK Statistics Authority watchdog.

Mr Johnson’s claim is only true when excluding fraud and computer misuse – with overall crime having actually risen by 14 per cent, according to the latest Office for National Statistics (ONS) data.

The business secretary suggested on Sunday that Mr Johnson had only been referring to crime which “people experience in their-day-to-day lives” – comments for which the MoneySavingExpert website founder urged him to apologize “if he has any shred of decency in him ”.

You can read his comments in full here:

ICYMI: Watch plan to save PM be accidentally referred to as ‘operation shag a do’

This is an interesting nugget of information, again from the in‘s Paul Waughabout former Commons leader Jacob Rees-Mogg’s financial reward for his loyalty.

In today’s mini-reshuffle, Mr Rees-Mogg left his post in the Commons for a newly-created role: Minister for Brexit opportunities and government efficiency.

Labor’s Angela Rayner reacted to the news by highlighting there were “no pay rises for the working public [but a] tidy sum for sycophantically loyal politicians ”.

“Nice priorities you got there Boris,” the party’s deputy leader said in a tweet.

The Labor leader’s assurances came the day after he was harangued by angry mobsters outside parliament, many shouting abuse at him including Jimmy Savile slurs.

It came after Boris Johnson used a Commons debate about the Partygate scandal to falsely accuse Sir Keir of failing to prosecute Savile while he was the director of public prosecutions.

Mr Johnson has been urged to apologize by various political figures, including a number of his own MPs, but Downing Street has repeatedly insisted this will not happen.

Boris Johnson has been accused of having “complete disregard for standards in politics” after using a reshuffle to promote chief whip Mark Spencer, who has been accused of “blackmail” against MPs and is currently under investigation for alleged Islamophobia.

In a shake-up of his top team, designed to help him draw a line under the Partygate scandal, the prime minister made Mr Spencer leader of the Commons, a role in which he must act as custodian of the Westminster complaints system as well as upholding the rights and interests of backbench MPs.

But Mr Spencer is the subject of an official investigation into claims, which he denies, that he told Tory MP Nusrat Ghani she was being demoted from a ministerial position because her “Muslimness” made others uncomfortable.

Our political editor Andrew Woodcock has the full report:

On that note, Downing Street in the last hour announced that Chris Pincher has been given the role of deputy chief whip in the current reshuffle.

The Conservative MP for Tamworth was moved from his previous position as a minister in the Department for Leveling Up, Housing and Communities in the process.