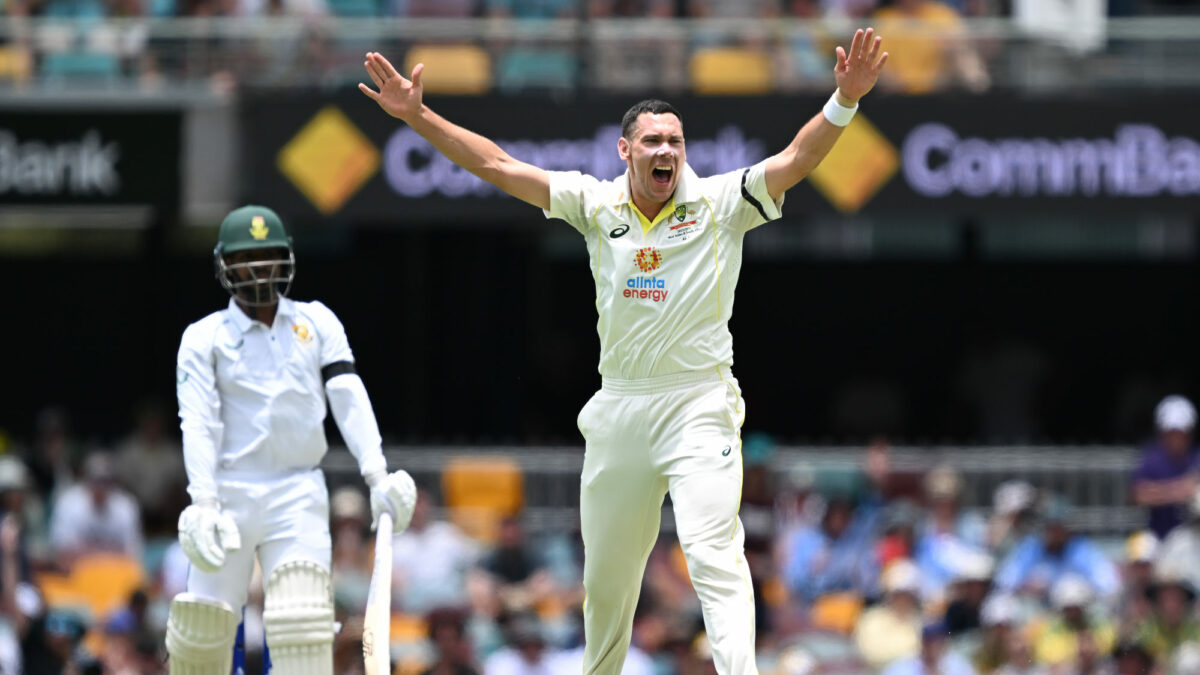 It had all been going so well. Australia reduced South Africa to 4/27 inside 11 overs, making the tourists topple with a barrage of seam bowling that made an already shaky top order look even less secure.

And yet, the pressure was lifted. Perhaps it is to be expected – this is South Africa, ranked third in the world, and not the Sydney Thunder – but the hosts will be a little annoyed that they were unable to complete the decimation.

Scott Boland’s role in his own barely believable underdog story continued with another two wickets for not very much, poking his average back down into single figures and, at a point midway through the first session, it looked like David Warner and Usman Khawaja would be wearing their pads at lunchtime.

Instead, a counterattack from Kyle Verreynne, who made a half century, and Temba Bavuma leaves things nicely poised, with Bavuma departing with the partnership up close to 100.

Either side of that, however, wasn’t great: after the 4/27 to start, the Proteas lost their tail for even fewer, with the final five falling for another 27 runs.

Australia chose to bowl at Brisbane for the first time in a million years and it wasn’t hard to see why. The pitch looked like it had been ripped straight from Kermit the Frog’s back and South Africa’s batting line-up was seemingly also held together by string.

Still, it takes some stones for an Aussie captain not to bat at home, especially at the Gabba. The mind cast back to England last year, under soupy skies and with green on the wicket, deciding that you always batted in Australia no matter what and conditions be damned, before getting skittled. Pat Cummins learned that lesson the easy way.

The adage in England is that one does not look down, rather up, to decide whether to bat or not, and as much as the conditions were more Birmingham than Brisbane, it was the surface that caused the problems here.

Once Australia found their line – and that took a while – they ran through the tourists like a hot knife through Saffa. The first was a little fortunate, as two leg side balls had already gone to the fence for leg byes before one from Mitchell Satarc took an extra bit of bounce and nicked Dean Elgar’s glove, but the next three were superb.

Cummins, uncharacteristically wayward early, clicked into gear and removed Rassie van der Dussen, before Scott Boland did Scott Boland things to get two more. Cam Green, incidentally, did Cam Green things for the first of the Victorian’s pair, with another stunning catch in the gully.

Boland’s second and Australia’s fourth, told the story. It’s hard to remember many LBWs on the opening morning of a Test match at the Gabba – Graeme Smith was the last to be dismissed in such a manner in the first 20 overs, and that was a decade ago – but this pitch was not like a usual one. This ground has been one of the best in the world for leaving on length, but not anymore.

Erwee bit of a problem with the batting

Much of the narrative thus far in this series has focussed on the batting, or lack thereof, from the South African side and certainly, at 4/27, it did seem a bit of an issue.

Once Elgar departed, it looked even worse, with several rabbit-in-headlight performances that brought back happy memories of Rory Burns, Zak Crawley and a host of recently-departed West Indians.

Sarel Erwee tried too hard, played one he didn’t need to and ended up sending it to Green. Khaya Zondo was the opposite, playing far too tentatively and finding himself pinned.

There was an interesting lesson in the brief Proteas resistance either side of lunch, however. We’ve all been watching the Bazball revolution take over Pakistan in recent days, with the England side reborn under their new attacking overlord, and the key tenet of that philosophy is transferring pressure back onto the bowlers.

Verreynne and Bavuma might not be world beaters, but they did, at least, do a bit of that. Cam Green was brought in and promptly thumped for ten in an over by Verreynne, who seemed intent not to die wondering. He took him for another seven later on and forced Cummins to withdraw Green from the attack.

From then until lunch, every over featured a boundary, save for the last which would have had one had Marnus Labuschagne not performed a miracle swimming move to bat back from the rope.

When it Verreynnes, it pours

The fightback from Verreynne was by far the brightest spot on what was, let’s face it, not a banner day for South Africa. He piled on 64, including a stand of 98 with Bavuma, and it was the aggression that he showed that was the main takeaway.

The period in which he was batting helped, too, with the ball old and the pitch more predictable, but it was his attitude to the task which forced the game, however briefly, in the tourist’s favour.

The keeper smashed his ninth for four and his eleventh for six, and sent anything poor in the direction of the boundary, while also displaying his willingness to get to the other end and turn the strike over that made the difference. Sometimes, making the fielders have to change plans, breaking up the play and moving the opposition about is enough.

Bavuma more than played his part, too. He was also a willing runner, but his cover drives stood out. There were several that went to the longest part of the ground and others that, had they gone in any other direction, would not have been hauled in.

Labuschagne was repeatedly made to earn his dinner with long chases that made four into three and made the South Africans keep up their side of the bargain.

By the time Verreynne was prized out by Nathan Lyon, he had turned an embarrassing score into merely a bad one.

Mitchell Starc gave headline writers everywhere a fright by threatening to bring up his 300th Test wicket in the first innings, but will have to wait another day or two after falling short on 299.

His three today showed just what the seamer is all about: the first teased Elgar in then beat him with bounce, the second was in the corridor that made Bavuma play and, consequently, scatter his own stumps and the third was a masterclass in white ball-influenced bowling, switching between cross seam and conventional positioning and short and full-pitched lengths to leave Keshav Maharaj without a clue what was coming.

The milestone didn’t quite come, but you suspect that Starc won’t be bothered too much. The Aussie bowling was far, far too good for South Africa and Starc was, as ever, at the heart of it.


I just watched Biggie Smalls perform ‘live’ in the metaverse