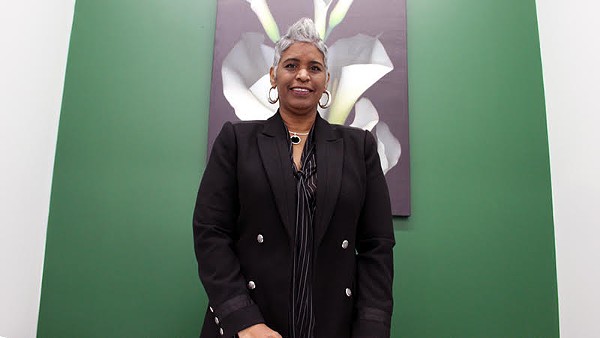 Adrienne Scales-Williams is a rare African American owner of a marijuana dispensary.

Her Forest Park Southeast shop sits next to a used car dealership. The blindingly white façade reads “Luxury Leaf” in black cursive, an homage, she says, to the iconic black-and-white logos of Chanel and Saks Fifth Avenue.

“Most people who know me,” Scales-Williams says, “know that I like sophistication.”

But the Normandy native didn’t start out in cannabis. She began her career at Xerox as a supply account manager, before running a document printing and management company. She then worked for casino companies before getting into the legal weed business, a move inspired by her mother’s descent into illness years before.

“My mother had pancreatic cancer, and at the end, she didn’t want to eat,” she says. “At the time, marijuana was not medically legal. I wanted to get some for her, and I couldn’t.”

On a recent Wednesday, Scales-Williams shows off the facilities, which opened last month. She’s in her 50s, sharply dressed in a black topcoat with a black-and-white pinstripe blouse. She passes through the ornate, heavy door, greeting the security guard on her way to the dispensary’s retail space.

Inside are circular chandeliers and tables of cannabis flower, concentrate and edibles from the pricier end of the spectrum.

This shop represents years of dreaming and hard work. Scales-Williams had to jump through countless hoops to land her coveted license, hiring consultants and finding the right connections. “It’s all about connections,” she says.

For her, this moment has been a long time coming, considering that marijuana has long been used to oppress — rather than empower — African Americans. In St. Louis, Black people have received the overwhelming majority of marijuana citations. She’s seen this play out firsthand, when a friend’s teenage son was pulled over, arrested and jailed for holding a couple ounces of weed.

She grows frustrated thinking about “all of the people that look like me that’s gone to jail for what I am selling, legally now.”

Yet she is in rare company. After medical cannabis was legalized in Missouri in 2018, 1,163 applicants sought licenses to operate medical marijuana dispensaries. More than 80 percent were rejected, leaving just 192 license holders.

This small cohort seems to have made good money. Since October 2020, Missouri dispensaries have logged $240 million in sales.

But Luxury Leaf is the first Black-owned dispensary in the state to open. Why did it take so long?

“I think the barriers for a lot of people who look like me were more on the financial side,” she says. “[It’s not] that the expertise does not exist within our race.”

Now that she’s made it, Scales-Williams doesn’t plan to relax. She knows how this game is played.

“I’ve been in business 27 years,” she says. “The cannabis space in Missouri is no different than anything else that I’ve applied for. There was never an even playing field.”

At the Cola Private Lounge on Cherokee Street, sun rays pouring through the second-floor window illuminate tendrils of smoke. Proprietor Brennan England has lit up a blunt.

It’s just before 4:20 p.m., and the lounge’s patrons are rolling their own. Someone pauses from knitting a scarf to take a drag. A woman on her laptop finishes a virtual meeting before taking a hit from a circulating joint.

The vibe feels like a laid-back apartment party, with low-key conversations amidst soft jazz. A table in the den area has glass pipes and dab rigs; beyond the pool table, the kitchen is stocked with equipment for turning cannabis into cooking budder.

Yet the Cola is not a dispensary, and doesn’t provide marijuana to its members.

Rather, as noted by the sign on the door, it is a place “where buds meet.” It’s located on a stretch of Cherokee Street that England calls St. Louis’ “green light district.” The stretch is also home to several head shops, Swade Dispensary, and a soon-to-be-opened dispensary from former NBA players Larry Hughes and Al Harrington.

For England, 35, the lounge is the culmination of his vision to foster a Black cannabis culture dating back to prohibition. He compares it to the “tea pads” which proliferated in early and mid-twentieth-century New York City. In 2019, England rolled his first legal blunts at the Cola Lounge. It was “a liberating moment,” he says.

“I knew I was protected by state language, and it brought tears to my eyes,” he says. “I knew this wasn’t perfect, but it was a huge step forward.”

England grew up in south St. Louis, graduating from Cleveland High School. After studying at Southeast Missouri State University, he returned here in the early 2010s, taking jobs as a massage therapist while moonlighting as a host of private cannabis parties.

“We did a cannabis-themed summer camp, Camp Elevated for the Stoned and Gifted,” he remembers with a laugh. “We all dressed in camp counselor gear. We busted open a pot piñata.”

Yet when Missouri cannabis legalization arrived, he didn’t seek a dispensary license.

“As a business owner, there’s nothing to protect me,” he says. “I’m riding in a gray area. Until this plant is completely decriminalized, there is a risk.”

Instead, the Cola Lounge is a natural evolution of England’s formerly off-the-book parties. The space has hosted musical performances, DJs, drag shows and “puff and paint” art classes.

England spent years advocating for legalization, volunteered on the nearly successful 2016 ballot initiative and now serves as president of the Missouri chapter of Minorities for Medical Marijuana.

England says that he knows of only a handful of Black license holders. (A spokeswoman for the Department of Health and Senior Services says they do not know the exact number statewide.)

Before legal weed, England notes, generations of growers and black-market businesses fostered the knowledge — and even specific strains — which now support the above-board cannabis market.

“This is an industry that’s being built on the backs of the people that have been subjected to unjust sentencing and targeting by systemic racism,” England says. “Justice looks like putting the freedom of those people first.”

It’s happening elsewhere, including in Oklahoma of all places. There, in 2019, the state’s pardon and parole board commuted the sentences of more than 500 drug offenders, the largest-ever mass release.

In Missouri, however, it hasn’t been so simple. Since late 2020 Governor Mike Parson has taken a case-by-case approach, commuting the sentences of 15 drug offenders, including several serving more than a decade on cannabis-related crimes.

England concedes that cannabis legalization may make some people wealthy — maybe even himself.

But that’s not enough.

“We have to think about more than ourselves,” he says. “Prisoners are those who are most impacted.”

Legal Missouri piggybacks on the successful medical marijuana initiative that passed in 2018. It has an “automatic expungement” provision, and a system for current offenders to petition for their release. Those convicted of possessing more than three pounds of marijuana would have to serve out their terms.

Its competitor, Fair Access Missouri, offers an alternative to the “entrenched monopoly” of the current medical cannabis industry. It creates an expungement program and declares any state law criminalizing possession of marijuana below twice the legal limit “null and void,” except in cases of a person under 21.

England takes issue with both initiatives, as they retain measures of prohibition and, as he sees it, continue placing faith in the same prosecutors and judges who have sentenced Black marijuana users in the past.

“Sometimes no move is a good move, you know? Why support these at all?” he muses. “If the initiative is a step forward, but it’s at the expense of those that are still in jail, or those that could still be incriminated for the plant — is it worth that step?”

Chef Priscilla Burrell’s cheesecake, served on a small golden tray, is still oven warm when I take the first bite. The cinnamon and apple toppings seem to melt into the fluffy crust.

The 38-year-old East St. Louis native moved back to St. Louis at the beginning of the pandemic. A trained chef, she’d spent several years in Atlanta, working a variety of jobs outside the food industry, including at a carpet cleaning business and delivering packages.

“For a long time, I never wanted to turn cooking into a career because it’s my peace and my disconnect from the world,” she says. “But it just kind of kept tugging at me.”

Her chef’s journey into cannabis started with Rice Krispies Treats. Then brownies. She read Cannabis Cuisine by Andrea Drummer, the California chef who opened America’s first restaurant selling cannabis on site for pairing with meals.

And then Burrell began experimenting.

“I started taking my own spin on her recipes,” she says. “I went for my everyday baking stuff, cheesecakes and peach cobblers. Then I kind of ventured off to the savory side, meals like chicken and crab cakes.”

She hosted fifteen friends for a meal in May 2019. It went well, and then on April 20 last year she put on a brunch with cannabis-infused French toast, shrimp, grits and a fresh pasta station.

Burrell also plays hostess at her parties, guiding diners through their cannabis experiences.

“If you get too high,” she says, “we keep CBD on hand to bring you back down to a more reasonable level.”

Yet Missouri’s cannabis laws don’t cover, or allow, for customers to dine on freshly made cannabis-infused food. In fact, “infused products” –— from cookies to gummies to chocolate bars — must be prepackaged in strictly regulated facilities. (They also must be “geometric shapes, including, but not limited to, circles, squares, rectangles, and triangles,” according to 2020 legislation.)

While CBD has found its way into beer and seltzer, cannabis cuisine remains the domain of private chefs like Burrell. Her dream — a physical bistro or bakery where she could have full control over THC-infused cuisine — doesn’t exist anywhere in the U.S., including the eighteen states that have legalized marijuana.

“The industry just kind of left out the culinary side,” Burrell says. “I feel stuck.”

Yet with Pricise Dining, the catering company she founded in Atlanta in 2019, she’s been able to infuse savory courses into decidedly non-geometric servings of seafood, poultry and pastries.

And she’s in good company. While the field of cannabis cuisine still exists in a legal gray area, some of its trailblazers are Black chefs and business owners. Along with Andrea Drummer, the Black-owned Canna Cafe in Chicago might be the closest thing to a full cannabis restaurant in the country, with fresh wings, burgers and fries served with 100 or so milligrams of Delta-8 THC, which has a stronger effect than CBD but is not regulated under Illinois law. Another inspiration for Burrell is celebrity chef Nikki Stewart, who has combined cannabis-infused meals with entertainment to create a touring production of high culture and hot beats.

Those success stories keep Burrell going. She can see herself opening a bakery in Illinois, or selling snickerdoodles and brownies to Missouri dispensaries. She still dreams of a cannabis bistro or diner. But after her travels to places like Las Vegas and New York — where chefs can obtain micro-licenses to supply dispensaries — she’s less sure about where it will be.

“My vision is already happening,” she observes. “Out there.”

For now, Burrell is focusing on private cannabis dinner parties. Her most recent offering, a charcuterie box for Valentine’s Day, includes a strawberry cheesecake.

In the kitchen, she parcels out cannabis budder that she’s molded into sticks for precise measurements. She adds her “canna sugar,” while more THC is infused into the crust. Step by step, she adds the cream cheese, sour cream, vanilla and lemon. Out of the oven, she checks the cheesecake to make sure it’s done, noting its “good cheesecake jiggles.”

“A lot of my customers went on diets for the new year, and I’m actually working on some new sugar-free recipes,” she says. “I’m going to test out some stuff over the next couple weeks.”

She adds, “I just know there’s a demand for it.”

Email the author at [email protected]