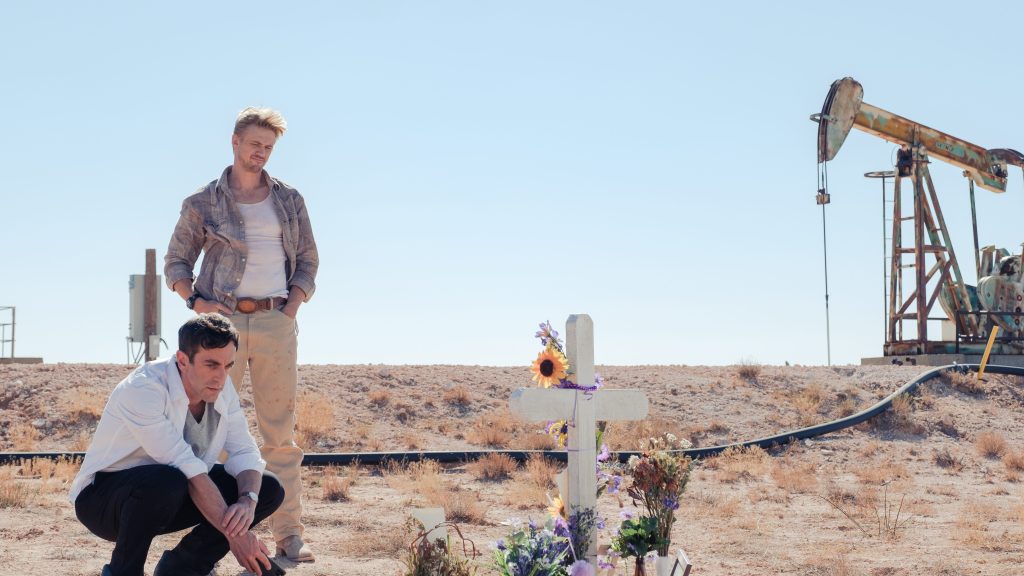 BJ Novak is looking for American truth in his directorial debut dark comedy film, Vengeance. He’s amassed an all-star cast of actors including Issa Rae, Dove Cameron, and Boyd Holbrook, for the movie about a city-slicking mid-thirties man travels to Texas and got more than he bargained for in a comedy of errors created by his own hubris. The story is told in a way that only Novak knows how: with biting wit, and fiery sarcasm.

Ben Manalowitz (BJ Novak) is a single man in NYC. With a new job at the New Yorker, and a supportive editor Eloise (Issa Rae), he’s on top of the world. As he parties with musician John Mayer and they talk about their sexual conquest, he tries to come up with ideas for a successful podcast. During the night he receives a phone call from Ty Shaw (Boyd Holbrook), who mentions his sister Abilene Shaw (Lio Tipton), whose body was found in an oil field and died of an overdose.

Ty swears his sister was in love with him and that Ben is her boyfriend. Feeling bad about the situation, he leaves New York and heads to rural Texas to his “girlfriend’s” funeral. When he arrives he meets the rest of the family including Abilene’s mother Sharon (J. Smith Cameron), two sisters Paris and Kansas City, little brother El Stupido and Granny Carole (Louanne Stephens). Ty believes his sister was murdered and ask Ben to help him get revenge. After meeting the family, he is inspired to turn the whole ordeal into a podcast: Dead White Girl. Armed with his recorder and talented for extracting information, he plans to get to the bottom of what happened to Abilene.

Ultimately, Vengeance is a coming-of-age story about a 30-something man finding his voice. Through this story, Novak injects himself and his frustrations with this country, and how the word “truth” has become diluted as the United States has split itself into blue vs red. He funnels this idea through the characters we meet. In the end he learns the truth is different for everyone and there is nothing he can do about that. Ben also comes to understand more about women and his relationship to them, and this could be why the various female characters’ only job is to teach him, and be in the background of his life. They are there to help him, but are not allowed to help themselves. At least the film admits this is purposeful

Every act has a moment that slows down the pacing, this is due to character Quentin Sellers (Ashton Kutcher) and his philosophical mambo-jumbo monologues. To be honest, that did not completely annoy me because the dialogue had some accuracy to it, and it shows Kutcher playing against type. He’s doing some master class acting that I dare say he is the best he’s ever been as the tall dark and swave music producer. Novak actually gave the actor a mature role where Kutcher can show off the full range of his talent.

What Ben learns is everything is bigger in Texas, including their expectation and their reality. Texans can be known as collectivists who believe in family. He connects with Abilene through old videos of her singing and gains a sense of closeness with her that he refused to give when she was alive. Ben draws closer to her family through a sense of cultural exchange. They do not understand one another sometimes, but they do relate through the sense of grief over Abilene and their love of life. Vengeance is not necessarily about who is smarter or more truthful, but self-awareness and finding a balance within oneself and in connection with others. Not in the agree to disagree sort of way, but how those who intellectualize everything (like Ben) without making room for love, are just as devoid of humanity, as those who love without intellect (the Shaw’s).