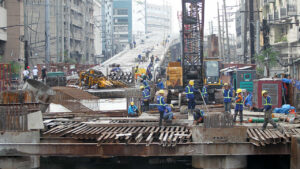 A PROPOSED MEASURE seeks to require National Economic and Development Authority (NEDA) Board approval only for projects worth over P5 billion.

Newly filed House Bill (HB) No. 6527 states that “upon favorable recommendation” of the NEDA Investment Coordination Committee (ICC), only projects that cost more than P5 billion will be submitted to the NEDA Board for approval.

The substitute bill, which seeks to amend the Build-Operate-Transfer (BOT) Law, was filed on Tuesday by House Ways and Means Committee Chairman and Albay Rep. Jose Ma. Clemente S. Salceda.

Under the current BOT Law’s implementing rules and regulations, projects that cost more than P300 million need to be submitted to NEDA Board for approval upon the recommendation of NEDA ICC.

The NEDA Board is chaired by the president of the Philippines.

This would remove a significant bottleneck for many projects as these would no longer need the president’s approval, Public-Private Partnership Center Deputy Executive Director Jeffrey I. Manalo said in an interview on the sidelines of the Arangkada Philippines Forum in Pasay City on Tuesday.

Under HB 6527, projects that cost between P2.5 billion to P5 billion only need to be submitted to the NEDA-ICC for approval.

For projects that cost below P2.5 billion, it would only require approval from heads or boards of implementing agencies.

The proposed measure also allows NEDA-ICC to update the amounts “when the need arises.”

This is to “future-proof” the law, according to PPP Center’s Mr. Manalo.  “This is so we do not need to change the law if we need to update the numbers.”

At the same time, he noted that the bill recognizes the autonomy of local government units.

Under the bill, local governments will approve their own projects “regardless of project cost.”

“Prior to approval, projects implemented by LGUs (local government units) shall be confirmed by the respective local development council,” it said.

However, PPP projects undertaken by local governments that would affect national development or master plans and national projects should “secure the endorsement of the National Government.”

During the Arangkada forum, NEDA Undersecretary Rosemarie G. Edillon noted that the proposed measure ensures that the identification of PPP projects is guided by the principles set by the government, including “effectiveness in meeting government objectives; appropriateness of the chosen procurement modality; value for money, accountability, and transparency; and public, access, safety, and security.”

Senator Juan Edgardo M. Angara said the process of adjusting thresholds should be indexed to inflation.

Sought for comment, Terry L. Ridon, a public investment analyst and convenor of think tank InfraWatch PH, said in a phone message: “Government should limit the highest regulatory scrutiny (i.e. NEDA Board approval) only to the most important PPP projects which have threshold project costs of P10 billion and above.”

“Almost all current PPPs with national significance, such as new train lines and expressways, have project costs way beyond P10 billion,” he added.

“It should be noted that our proposal limits the approval authority of agencies, local governments and GOCCs similar to the pending bills as projects higher than P2.5 billion should be subjected to greater scrutiny by an interagency panel such as the ICC. This ensures greater transparency and accountability in conducting PPPs,” he added.

How, in two years, JioMart grew to fulfill 600K grocery deliveries per day in 260 Indian cities, via WhatsApp integration and using Dunzo for last-mile delivery (Nilesh Christopher/Rest of World)


Cody Bellinger agrees to a 1-year, $17.5 million deal with the Chicago Cubs, who are seeking a big payoff from the former NL MVP – The Mercury News