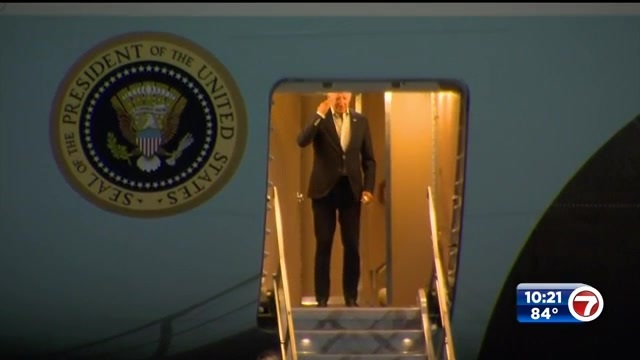 WASHINGTON (AP) – President Joe Biden will try to reaffirm and recalibrate US relationships in the Middle East during his first trip to the region since taking office, but it will not be easy in a corner of the world that’s asking fresh questions about the future of American influence.

Biden was bound Tuesday night for Israel, where chaotic politics have left a caretaker government in charge until elections later this year, limiting the opportunity for sustainable dealmaking. It’s unlikely that Biden will have much better luck in the West Bank when he visits with Palestinian leaders who have become increasingly unpopular among their own people.

The trip only becomes more fraught from there. Biden’s next stop will be Saudi Arabia, an autocracy with a legacy of human rights abuses but also vast reserves of oil that the president wants to see pumped more quickly to alleviate high gas prices caused, in part, by the Russian invasion of Ukraine.

Looming over Biden’s travels will be his administration’s struggle to rejuvenate the Iran nuclear deal that was reached by Barack Obama in 2015 and abandoned by Donald Trump in 2018. Negotiations stalled last month, and Iran is believed to be closer than ever to having the ability to build a nuclear weapon. Failure to reach a diplomatic solution could increase the chance of conflict in an already combustible neighborhood.

“He’s going to face a region that’s long on problems with very few solutions,” said Aaron David Miller, a former State Department official who is now a senior fellow at the Carnegie Endowment for International Peace.

Biden has been more focused on Europe, which is experiencing its worst armed conflict since World War II, and Asia, where he’s been trying to reorient US foreign policy to confront China’s rising power.

Jake Sullivan, the president’s national security adviser, said the US needs to remain “intensively engaged” in the Middle East because the region is “deeply interwoven with the rest of the world.”

In addition to meetings with Israeli and Palestinian politicians, Biden is expected to visit an Israeli missile defense installation and the Yad Vashem Holocaust Memorial. He’s also slated to receive Israel’s Presidential Medal of Honor and visit with US athletes taking part in the Maccabiah Games, which involves thousands of Jewish and Israeli athletes from around the globe.

The US and Israel plan to issue a joint statement dubbed the Jerusalem Declaration on Thursday that is meant to serve as a roadmap for the countries’ relationship in the coming years, according to senior Israeli officials who briefed reporters Tuesday.

The declaration would include a tough stance on Iran’s nuclear program, committing both countries to use “all elements of their national power against the Iranian nuclear threat,” according to one of the officials who spoke on the condition of anonymity.

Biden travels to Saudi Arabia at the end of the week, when he’ll attend a summit of the Gulf Cooperation Council, which brings together Arab leaders from the region. Sullivan said the president will make a “major statement” on his vision for the Middle East region.

But the most closely watched encounter will be the president’s first meeting with Mohammed bin Salman, the kingdom’s crown prince and presumed heir to the throne currently held by King Salman.

Biden has been sharply critical of Saudi Arabia, even saying during the presidential campaign that it should be treated like a “pariah” for human rights abuses. His administration released a declassified intelligence report saying the crown prince, known as MBS, likely approved the 2018 murder of Jamal Khashoggi, a US-based writer who was critical of the regime.

However, the shifting politics of energy have led Biden to change course, especially as American drivers face high costs at the gas pump. The global price spike could also make it more difficult for Biden to convince allies to keep pressuring Russia with sanctions as the war in Ukraine grinds on.

Even if Biden’s visit goes smoothly, there may not be any immediate relief because oil production targets are governed by an agreement reached among the members of OPEC +, a cartel that includes Saudi Arabia and Russia. And while the current agreement expires in September, concern about a potential worldwide recession could make oil producers wary about pumping more.

Biden made only a glancing reference to working with Saudi Arabia to “help stabilize oil markets” when he defended his plan to visit the kingdom in an op-ed in the Washington Post, the same newspaper that used to publish Khashoggi’s writing.

He promised to continue raising human rights issues, and he said he wants “to reorient – but not rupture” the US relationship with Saudi Arabia.

“I think reality just set in,” Katulis said, describing the administration’s views on the region as evolving from “adolescence to a much more mature phase.”

Critics say that some of Biden’s rhetoric around the Saudi leg of the trip, particularly playing down his expected meeting with the crown prince, could complicate efforts to reset relations. The president has stressed that the primary purpose of his visit to Jeddah is to take part in the gathering of the Gulf council countries.

One factor in seeking a détente in the Saudi relationship is growing concern in the administration that the Saudis could move closer to China and Russia amid strains with the United States.

Another significant stumbling block has been the lack of a new nuclear agreement with Iran. The last round of negotiations in Doha, Qatar ended without success. The Saudis, as well as the Israelis, have been frustrated that the White House has not abandoned efforts to revive the deal with Tehran.

“We want the Saudis to feel that the US is committed to its security long term, and that, in turn, the Saudis are committed to US national security interests as well,” said Richard Goldberg, a senior adviser at the Foundation for Defense of Democracies who served as a senior National Security Council adviser on Iran in the Trump administration. “The president is saying ahead of his trip, ‘We are going to continue to hedge on you.’ If I was MBS looking at that, I would say, ‘Well, then I’m going to hedge against you as well.’ ”

The threat from Iran, which would only increase if it built a nuclear weapon, has spurred greater cooperation between Arab nations and Israel, something that would have been unthinkable decades ago. Biden hopes to foster closer ties during his trip, and it’s notable that he will be the first US president to travel directly from Israel to Saudi Arabia.

Although no one expects the two countries to immediately normalize relations, there could be incremental steps taken, such as by allowing Israeli flights to cross through Saudi airspace. The Israeli-Saudi relationship remains “very delicate” but there is hope that Biden’s visit to the Middle East will mark the “start of the process of normalization,” according to the senior Israeli official.

It’s unclear whether any of these changes could eventually lead to a resolution of the decades-old conflict between Israel and the Palestinians, who live under an Israeli military occupation.

A reminder of the turmoil that could break out at any moment came last year during a brief, bloody war between Israel and the militant group Hamas, which runs the Gaza Strip.

Peace talks are moribund, nor is there much chance of reviving them at the current moment.

Yair Lapid, Israel’s caretaker prime minister, leads a centrist political party that is more aligned with Biden than the country’s recent conservative leaders. However, new elections are being held in November, and Israelis could decide to revert to Benjamin Netanyahu, a right-wing leader who has clashed with Biden in the past.

A warm visit from Biden could boost Lapid’s chances, but any overt shows of support for him could backfire.

Either way, the chaotic state of Israeli politics – this will be the fifth election in three years – means little can be accomplished in the interim.

Martin Indyk, a distinguished fellow at the Council on Foreign Relations who was Obama’s special envoy for Israeli-Palestinian negotiations, said it was “not the moment to try to revive the peace process.”

Still, Indyk said it was important for Biden to express his support for a two-state solution.

“If you ignore the Palestinian issue, it will come back to bite you,” he said. “And eventually it will explode. And that’s not in anybody’s interest. ”