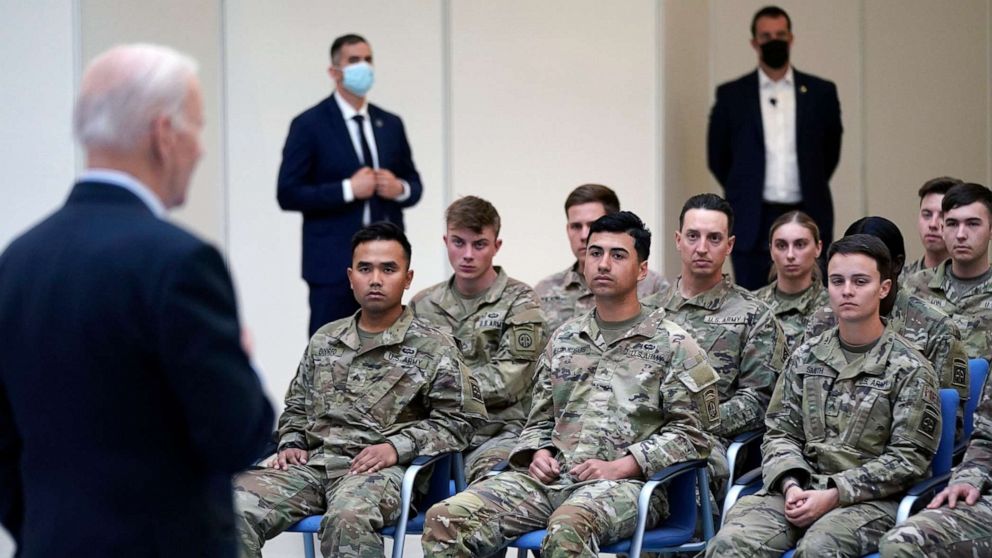 President Joe Biden touched down Friday in Poland, what’s becoming the epicenter for millions fleeing their home country, to meet with US service members and refugees as his presence in Europe sends a powerful message that NATO is united against Russia’s violent invasion.

At a briefing in Rzeszów on the humanitarian response to the ongoing crisis, Biden, again, called Russian President Vladimir Putin a “war criminal,” after the State Department announced this week its formal assessment that Russian forces have committed war crimes in Ukraine.

“The single most important thing that we can do from the outset is to keep the democracies united in our opposition and our effort to curtail the devastation that is occurring at the hands of a man who I quite frankly think is a war criminal,” Biden said, flanked by Poland’s President Andrzej Duda and USAID Administrator Samantha Powers. “I think it will meet the legal definition of that as well.”

Biden’s schedule was slightly delayed Friday after the plane flying Poland’s president turned back and route to Rzeszow to make an emergency landing in Warsaw.

Earlier, Biden and Secretary of Defense Lloyd Austin greeted members of the 82nd Airborne division in Rzeszów to thank them for their service – and ended up staying for a slice of pizza.

But the president also raised eyebrows when he appeared to tell the group that American troops will be going into Ukraine, though he has repeatedly said that he will not send troops there.

Asked to clarify Biden’s comment, a White spokesperson told ABC News, “the President has been clear we are not sending US troops to Ukraine and there is no change in that position.”

Biden also told the room that what they are engaged in is “much more than just whether or not you can alleviate the pain and suffering of the people of Ukraine.”

“What’s at stake, and not just in what we’re doing here in Ukraine to try to help the Ukrainian people and keep the massacre from continuing, but beyond that, what’s at stake is … what are your kids and grandkids gonna look like in terms of their, their, their freedom. “

Raising his familiar line of the current fight between autocracies and democracies, Biden told these troops what they are doing is “really consequential” and goes beyond just helping Ukrainians from this invasion.

He also brought up his late son, Beau, saying, “Proudest thing he ever did was put that uniform on. Like many of you, he did not have to go either,” Biden said.

National Security Advisor Jake Sullivan confirmed earlier Friday that the president will meet with refugees Saturday when he is in Warsaw and deliver a “major address” ahead of his departure.

“He will also have the opportunity to meet with Ukrainian refugees, and with American humanitarians who are they’re trying to help feed and respond to the material needs of the refugee population in Warsaw,” Sullivan told reporters on Air Force One. “And he will give a major address tomorrow that will speak to the stakes of this moment, the urgency of the challenge that lies ahead, what the conflict in Ukraine means for the world, and why it is so important that the free world sustain unity and resolve in the face of Russian aggression, “Sullivan added.

In neighboring Ukraine, the war continues.

In one of the worst attacks yet, the city council of the besieged Ukrainian city of Mariupol has said 300 people were killed in a devastating bombing of its drama theater, where hundreds of people were sheltering. The building was marked with the words “Children” written in giant Russian letters on the ground to either side.

Biden and the leaders of the other 29 NATO member countries came together in Brussels Thursday in a powerful show of solidarity against Russia’s invasion.

Biden announced new sanctions against Russia, targeting a majority of the Duma, the lower level of parliament, over 40 Russian defense companies and yet more Russian oligarchs. He also announced the US will provide $ 1 billion in humanitarian aid to support people within Ukraine and those impacted by Russia’s war against Ukraine. That funding will go to food, shelter, clean water, medical supplies and other assistance.