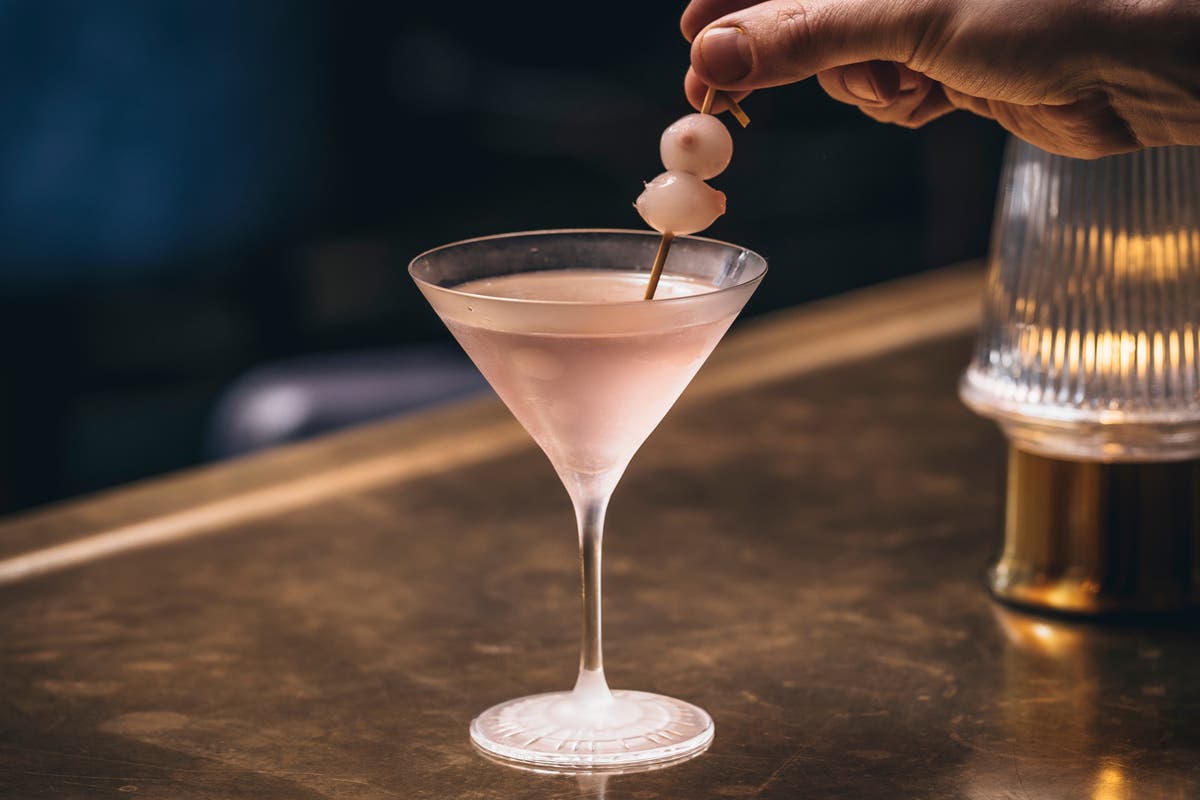 ccording to reports last week, the martini is having a moment across the pond. New Yorkers are apparently ordering the cocktail in swarms for the first time since the Mad Men era of three-martini lunches – some are even ordering intoxicating pitchers of stuff, which feels bold.

But while it’s back in fashion over there, over here it’s never gone away. Londoners have their livers to show for the undying popularity of the historic cocktail in the city where it has gone from strength to strength over the course of a century.

Today, London isn’t just home to iconic martinis such as the notorious Dukes double serve and James Bond’s (read: Ian Fleming’s) Vesper – the city’s best bartenders have reinvented the wheel, creating modern interpretations of the beloved classics that push the boundaries of how drinkers think about the martini. No longer is the drink limited to gin and vodka – tequila, mezcal, brandy and other unorthodox spirits are making their way into the time-tested classic.

From bucket-list martini meccas to places having fun with avant garde twists, here’s where to head for a fill of fog-clouding fun that only a martini can deliver.

Connaught martini at the Connaught Bar

The Connaught Bar’s signature martini has established itself as one of the city’s best because it’s not just a drink, it’s an experience. It starts when one of the bartenders rolls over the stately bar cart tableside. Guests are prompted to choose their preferred spirit (gin or vodka), flavor of housemade bitters and whether they’d prefer their martini wet, dry or otherwise. This is the point to pull out a phone out and catch the show. With the lavish room serving as a fitting backdrop, the martini is deftly stirred before being flamboyantly poured from the mixing glass held over the bartender’s head and into one of the bar’s custom martini glasses. It’s sexy, bold and elegant – little wonder the bar boasts the title of “world’s best”.

Pink Gibson at the Lowback

The Lowback is Canary Wharf’s hottest new bar, sat beneath its sister restaurant, Hawksmoor. The canalside, brasserie-style bar offers a range of “ultimate” martinis, all of which stay true to the classic martini formula, but with one distinct detail: each martini is chilled to -12 ° C using some clever tech. The savory Pink Gibson from this menu is made with vodka, umami gin, dry vermouth and a pink pickled onion, and is the star of the show. It’s silky, perfectly balanced, ice-cold – obviously – and all but begging to be paired with the bar’s cheeseburger. Given how potent the drink is – and given it slips down like a glass of water – tread lightly.

This hyped, Tom Dixon-designed bar adjacent to Liverpool Street’s Pan Pacific London focuses on seemingly minimalist drinks built around familiar flavors. The Verbena | Olive Oil is a sophisticated take on the classic martini that marries gin, dry mastiha, olive oil, lemon verbena cordial and orange bitters. It’s a martini for the masses – bright, citrusy, floral and downright delicious. Ordering a second will be tempting, but save room for the Pineapple | Miso, too, easily one of the best cocktails in town.

Dukes Bar is a bucket-list destination for most martini connoisseurs. Its spin was regularly hailed as “the best martini in England” back when legendary bartender Salvatore Calabrese developed the “direct martini” in the Eighties – and it’s still served in this style today, poured from frozen bottles into frozen glasses with insouciant flourish. The hotel is also the place where author Ian Fleming, a regular at the bar while writing the Bond novels, penned the infamous line “shaken, not stirred”. The high-octane martini at Dukes Bar comes with a clear warning: no more than two should be consumed in one sitting. For martini lovers with a competitive nature, this may sound like a challenge, but two filled-to-the-brim glasses of what’s literally just frozen gin – or vodka – with a whisper of the bar’s “sacred” vermouth and bitters is enough to leave even 007 himself wobbling out of the place. Besides, rumor has it that the glasses are so big, these are double measures, which makes the prices somewhat easier to stomach.

This dimly-lit, concrete basement bar underneath Michelin-starred Kol is brought to life with rattan furniture, candles resting in jícaras, clay pottery and frayed woven basket light fixtures set above the custom concrete-and-wood bar. It’s an ambiance that screams “order a margarita!”, But the hero of the hyper-seasonal cocktail menu, the cucumber and pine martini, is the must-have. The uplifting mixture of blanco tequila, dry vermouth, pine distillate, crème de cacao blanc and cucumber is scarily quaffable, drinking like a spa day. You’ll be tempted to guzzle it down, but it’s worth savoring every sip. Or ordering a second.

Fans of this sort of twist might want to try the Marsala martini at Bar Termini, too; dry gin, dry vermouth, sweet Marsala wine and almond bitters are stirred together to pull together what might be one of Soho’s best drinks, which is saying something.

Dry martini at the American Bar at the Stafford

Ask any seasoned martini drinker in London where to go for the best one, and the American Bar at The Stafford is likely to make the shortlist. This history-filled spot, decorated with an assemblage of worldly memorabilia – including artefacts, celebrity-signed photographs, sporting mementoes and baseball caps – serves a dry martini that is near flawless. To make theirs, a London dry style gin is mixed with a touch of dry vermouth and orange bitters before being stirred and poured into a chilled martini glass. Halfway through the drinking session, if your glass loses its chill, a waiter will come around and pour your martini into a freshly frozen one. It’s the pinnacle of five-star service.

Walter Gibson at the Nomad

When the Nomad brought its American cocktail pedigree to London in the summer of 2021, there were always going to be skeptics. But within a year, the hotel has proved its five-star status by sweeping awards for its bustling bars – Side Hustle, in particular – and though it might be because the Nomad is a tried and true hotel concept, the place feels like it’s been around for years. While the bars all do a killer classic martini, the Nomad’s signature, the Walter Gibson, is a masterpiece. Composed of gin, vodka, Vouvray, and pear eau-de-vie, it’s pre-diluted and chilled so that it can be poured directly out of a beeswax-lined bottle tableside into one of hotel’s branded coupe glasses, with a side of DIY pickled vegetables for garnish. Some guests toss the menagerie of pickles into the martini; others nibble on them as snacks that accompany the drink like a booze-filled happy meal. Both methods are legitimate, as is this martini.

One Sip martini at Tayer + Elementary

Tayer + Elementary, which houses two bars within one space – a high-concept cocktail bar in the back (Tayer) and high-volume service bar in the front (Elementary) – is currently ranked second in the list of the World’s 50 Best Bars . While the innovative drinks that champion seasonal and local ingredients at Tayer make it a can-not-miss destination for cocktail lovers, Elementary has its own allure as well – part of that being the unassuming One Sip martini. The micro-sized martini – made with vodka, vermouth di Torino and fino sherry – is served ice-cold in a shot glass that’s garnished with a plump blue cheese-stuffed olive. Have one to get the night started, or knock back a few and make it a full scale affair.

Few hotel bars in London are as lively and whimsical as they are sophisticated, but Scarfes is. Live music – typically jazz – brings the space to life seven nights a week, but its the cocktails that keeps the customers coming back time and again. The award-winning bar’s latest menu, dubbed “Off the Wall”, pulls inspiration from the bar’s namesake, cartoonist Gerald Scarfe, whose playful works grace the marble walls above the cozy furnishings. The cocktails are simple and inclusive, yet focused and refined, epitomized by the menu’s latest iteration of a modern martini called Princess Peach. It’s a delicate balance of Procera gin, peach wine, sauternes, dill and acacia honey. Its subtle sweetness makes this twist one that’s fit for a Vesper lover.

West London is not known for being a hot cocktail destination, but Amaro Bar, which opened its doors in December 2021 on Kensington High Street, is giving Londoners a reason to venture beyond Mayfair for some top-notch drinks. Owned and operated by former head mixologist at The Savoy, Elon Soddu, Amaro brings the hospitality and mixology experience of a five-star hotel to the intimate premises of a 38-seat local independent cocktail bar, but with a touch of Italian flair. Dec’s Martini, an homage to Soddu’s mentor at The Savoy, Declan McGurk, is a showcase of the bar’s pedigree. The carefully concocted, yet simple blend of gin, Cocchi Americano and mezcal is stirred together and served in the traditional v-shaped glass. The result is a drink that’s greater than the sum of its parts – a martini that you’ll catch yourself thinking about from time to time.