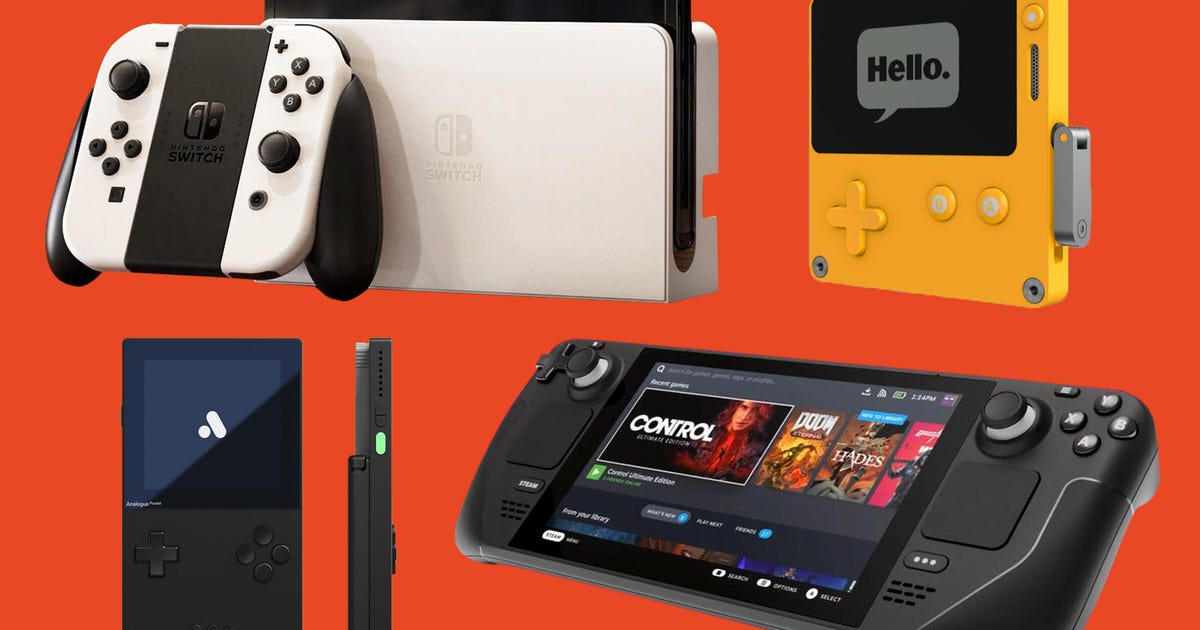 There’s been a welcome revival of portable game systems over the past few years. 2022 has been a big one: From the Steam Deck to Panic Playdate, plus the Razer Edge and Logitech G Cloud, the concept of gaming is evolving into a more modular world. Yes, you can take it with you.

Phones and tablets already do a fine job of playing tons of great portable games, and have been leading the mobile gaming world for years, offering features like game controller cases and game streaming from consoles, PCs and the cloud. Dedicated devices can provide unique features, exclusive games or extra power to do things your phone can’t. It almost feels like a return to the mid-2010s era of the Nintendo 3DS and PlayStation Vita.

The Nintendo Switch has been the best and most affordable portable game system for years, and continues to be CNET’s clear top pick: At $300 (or $350 for our favorite model), it can play a huge variety of Nintendo games, indie games, it can dock with a TV and can even play some fitness games. But Valve’s Steam Deck offers a unique proposition for those with deeper pockets: It’s large, and it can double as a full gaming PC.

For those who miss retro game handhelds like the Game Boy, you might consider putting yourself on the waiting list to order the Analogue Pocket or Panic Playdate, too, but both of those systems are more niche, and more indie/retro targeted, than the Switch and Steam Deck.

The Nintendo Switch is over five years old now, but Nintendo has indicated that no true successor is coming right now. A Pro model has been rumored for a while, but in the meantime the existing Switch remains extremely capable, full of great games (including lots of indie offerings), and pretty affordable considering its handheld/TV-connected dual function.

The OLED-screened Switch, released last fall, is the best Switch and our recommended pick. The more vivid and larger display looks fantastic, its rear kickstand works better for tabletop gaming, and both of these upgrades are worth the extra $50. The original Switch (or the V2 version), at $300, works similarly and is also still fine, and occasionally comes in special editions and holiday game bundles. The smaller, handheld-only Switch Lite is a great value pick at $200 for anyone who just wants a basic portable game system, but it lacks any ability to connect to a TV, and its controllers don’t detach. This makes it less versatile for families, and means you can’t replace the controllers if they break.

Valve’s big and powerful Steam Deck is a marvel. It can play a wide variety of PC games surprisingly well, and is the dream portable for any hardcore Steam fan, or anyone who has a big library of PC games. The Steam Deck can get expensive for the larger storage tiers, but for what it’s capable of, it’s not a bad deal. Wait times on preorders are still pushed out by some months, but more people seem to be getting theirs. The ability to play PC games or stream cloud-based games, and to connect to a monitor, keyboard or other accessories, puts the Steam Deck in a class of its own.

The Pocket looks like a totally remade Game Boy, and it is, in a sense. Analogue’s gorgeous handheld can play original Game Boy, Game Boy Color and Game Boy Advance cartridges perfectly, and can even play Sega Game Gear games using an adapter (Atari Lynx, Neo Geo Pocket and Turbografx-16 adapters are supposed to be coming soon). It has a high-res color screen and USB-C charging, and there’s a separately sold dock for TV play. One of the most exciting updates to the Pocket is its support for FPGA cores that can replicate classic game hardware, and play ROMs. There’s no game store for buying games: Pocket is a system to play classic cartridges or other games in amazing quality, if you want to tinker around with FPGA. There’s also a growing library of Pocket-compatible software in indie gaming channels like itch.io that can be sideloaded to a microSD card, too. Right now, though, the Pocket is still on backorder until 2023.

The tiny, yellow, black-and-white-screened Panic Playdate looks like a weird Game Boy with a mechanical crank sprouting from its side. But this system, made by the indie game company that developed Untitled Goose Game, plays its own tiny season of 24 indie-developed games, which come included with the purchase and appear over time like weekly presents. The Playdate has Wi-Fi and can download games or sideload other indie-developed titles from sites like itch.io, but you’ll have to learn to love the experiences you discover. We’ve loved playing on it so far, but alas, the Playdate doesn’t have any backlighting — you’ll have to find a lamp instead. The Playdate is on backorder until 2023 right now.

Should I just use my phone or iPad instead?

Tablets and phones are extremely valid game consoles: The iPad has tons of games on the App Store, and hundreds more on Apple’s subscription-based Apple Arcade. The iPad can pair with Bluetooth game controllers, too. iPhones and Android phones have tons of games as well, obviously, and a number of great game controller cases are available, including the Backbone and the Razer Kishi.

Phones and tablets also offer other advantages, including an ability to cloud-stream games on a growing number of services including Microsoft Game Pass Ultimate and PlayStation Plus.

The handhelds listed above have other advantages: unique game libraries, a chance to connect to a TV and play with others, and the capability to play higher-end PC games or classic game cartridges.

Should I wait for something else?

The Nintendo Switch Pro, a long-rumored upgrade to the Switch, could eventually offer 4K gaming and perhaps upgraded controllers, although the existence of such a device is entirely speculative. Odds are that Nintendo will instead just keep slightly improving the Switch via new models every couple of years, similar to how it kept upgrading its Nintendo DS and 3DS line over time.

The Steam Deck just arrived earlier this year, but it’s unclear when and if Valve will ever choose to upgrade it with better processors or newer features. And right now, Microsoft and Sony have stayed out of the handheld gaming picture.

Razer’s Android-based gaming tablet, the Razer Edge, shows where a wave of new gaming tablets could emerge to become the Steam Decks of the mobile world. Right now we don’t have any opinions on whether you should wait for it, because we haven’t played it yet.

Logitech’s streaming-only G Cloud handheld shows where more console/PC accessories could pop up as home handhelds to stream games away from a TV, but right now you’re probably better off using your phone or tablet and a game controller to do pretty much the same thing.

My kids alternate between iPad gaming and the Nintendo Switch. The Switch is without a doubt the best kid console, with the most family-friendly game library and best parental control settings. Still, be prepared to get annoyed at buying multiple copies of games and trudging through the process of creating multiple Switch family accounts.

Colts Updated Outlook: Tyquan Lewis Out for the Year