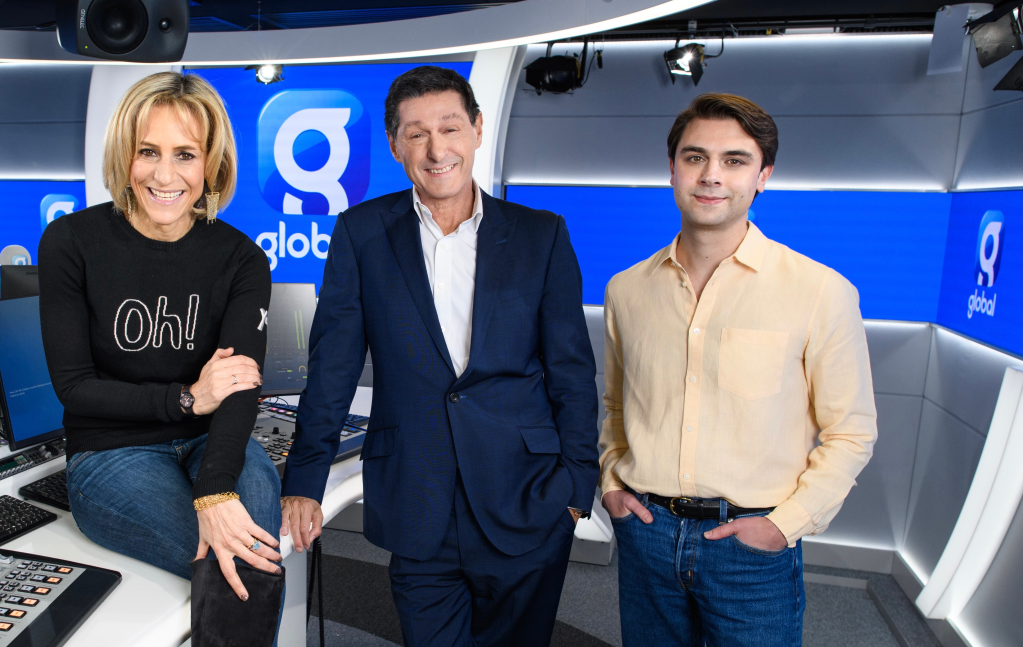 Dino Sofos might not be a household name in the same vein as Edinburgh TV Festival MacTaggart lecturer Emily Maitlis or former BBC North America Editor Jon Sopel, but he has had a mighty impact on the British broadcasting news landscape of late.

The creator of the hugely popular Brexitcast, Americast spirit Newscast BBC Sounds podcast franchise exited the BBC after 15 years last November to set up his own production outfit, Persephonica, with Tom O’Hara, and has since had a hand in tempting BBC lifers Maitlis and Sopel away from the corporation, amid a wider talent exodus that has left Broadcasting House bosses nervous.

Along with another ex-BBC heavyweight, Policy Editor Lewis Goodall, Persephonica is gearing up for the launch of Global podcast The News Agents, a daily audio show “holding power to account without fear or favor,” according to Sofos, who speaks to Deadline in the weeks before the launch. He is one of the most powerful figures in the British news game you’ve never heard of.

“I was speaking to Emily towards the end of last year and knew she was getting itchy feet,” explains Sofos. “We went for a walk just before Christmas and were kicking around ideas. In the end we said we missed Americast so got in touch with [her Americast co-host] John [Sopel] and went from there.”

At the time, Sopel had been “tapped on the shoulder” about the vacant BBC Political Editor role, says Sofos, but he thought Sofos and Maitlis’ idea for a new podcast sounded “fantastic” and exited alongside Maitlis several months later, with Chris Mason instead replacing Laura Kuenssberg in the BBC Political Editor top job.

The trio pitched to British radio station owner Global, fairly new in the podcast game, and soon after had their greenlight. A team has spent the past months clearing a path to launch with regular pilots to see The News Agents’ tone, modus operandi and production for what will be an immense challenge without the might of the BBC behind it.

“At its core, we want this to be a habit-forming podcast that keeps people coming back week after week,” says Sofos.

The show will drop daily at around 5pm BST (9am PT) on Global Player, featuring interviews with experts and insights from hosts Maitlis and Sopel from Monday to Thursday and Goodall on Friday, along with correspondents. It will also have a daily news hub across social channels Instagram, TikTok and Twitter.

As Maitlis, who is now recognized globally as the notorious Newsnight Prince Andrew interviewer, prepares to deliver the prestigious MacTaggart address on TV’s role in speaking truth to power, Sofos says The News Agents will call out politicians directly for lying.

He cites a number of examples where the media has failed to do this, flagging the Boris Johnson Partygate scandal, Brexit-related traffic in Dover and likely-future Prime Minister Liz Truss claiming a press release on public sector pay had been “misinterpreted.”

“When it’s clear that politicians are lying, we will say ‘Frankly that’s a lie.’,” he adds. “Journalism is about saying what you see so we feel empowered to do that.”

Sofos stresses that his criticisms aren’t directed at the BBC, which he roundly praises, but the general media landscape.

Maitlis and Sopel were reportedly frustrated at the BBC’s stringent impartiality rules and Maitlis fell foul of them during a now-infamous one-minute Newsnight piece against Boris Johnson’s former advisor Dominic Cummings, but Sofos says the pair will “not become shock jocks overnight” in The News Agents.

“They are not going to go off on huge rants, that’s just not how they work,” he adds.

Maitlis, Sopel and Goodall’s departures came amid a wider BBC talent exodus that also saw the likes of Mark Kermode, Simon Mayo and Peter Crouch, who helmed some of the corporation’s most popular podcasts, take their shows elsewhere.

Sofos, who was in part driven to launch Persephonica in order to own his format’s IP, thinks the BBC needs to be more willing to work with third party podcast producers, even if that means losing backend rights.

“They’ve lost key titles as well as talent so need to really think about what they want and how they can make the BBC a space for retaining talent.”

While The News Agents beds in, Sofos has ambitions to expand beyond news-focused projects.

The firm also has a strategic partnership in place with Sheffield-based This is England spirit The Virtues indie Warp Films, and plans to move headquarters to the South Yorkshire city.

“Rather than assume they can make podcasts, agents are steering TV and film producers to make these kinds of partnerships, and we’re well placed” adds Sofos.

The Brexit cast creator is reaching for the stars and reveals that himself and Maitlis approached Hugh Grant to be a co-host on a news adjacent show, which Grant politely declined as he didn’t have the time.

Grant or no Grant, the podcast landscape fills him with excitement.

“We’re in a fast-moving market traveling at one thousand miles an hour and there are so many amazing opportunities,” he concludes.