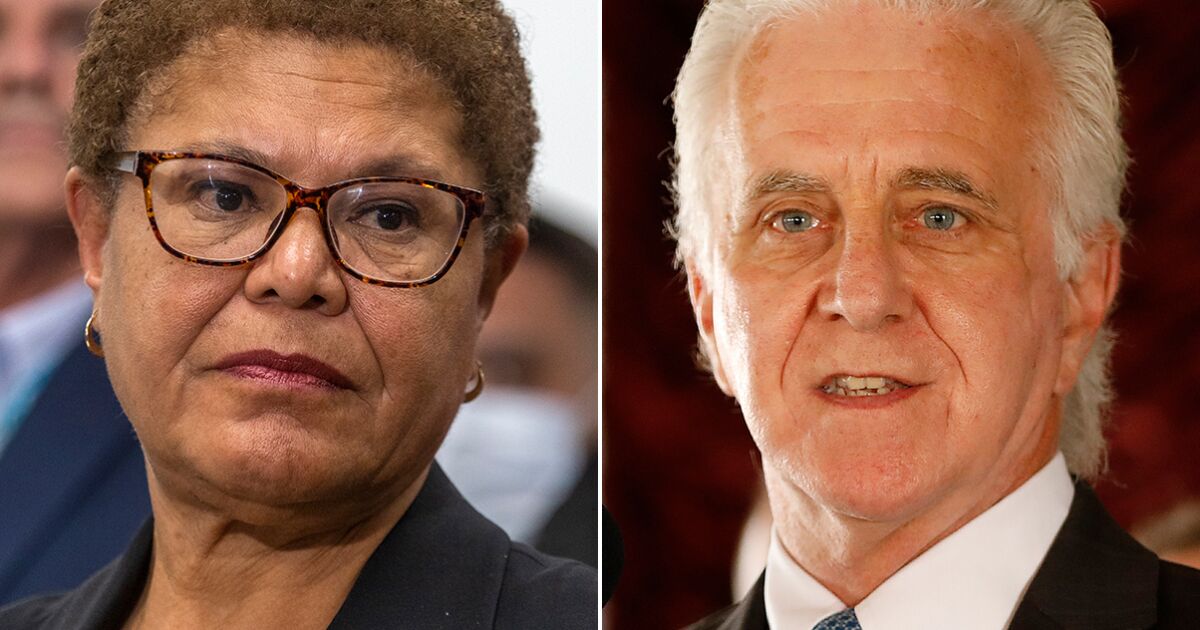 Los Angeles City Hall has no jurisdiction over a long-contested mountainous territory in the South Caucasus, but it was still the subject of attention from Mayor Karen Bass and City Council President Paul Krekorian this week.

The disputed region of Nagorno-Karabakh — known to Armenians as Artsakh — has been the site of conflict between Armenia and the neighboring country of Azerbaijan for decades. Located within the borders of Azerbaijan, the territory’s predominantly ethnic Armenian enclave is controlled by pro-Armenia separatists.

Tensions flared further last month with the blockade of the Lachin corridor, which links Nagorno-Karabakh to Armenia and provides the only supply route to the separatist region.

Crowds from Azerbaijan have blocked the supply route since Dec. 12, according to the Associated Press, which also reported that Azerbaijan’s U.N. ambassador has denied that the government or protesting activists have blocked the road.

Bass and Krekorian sent a letter to President Biden on Wednesday condemning the blockade as an “unfolding humanitarian catastrophe” and calling on the U.S. to “clearly demonstrate its commitment to democracy and global stability by coming to the aid of the people of Artsakh.”

The long-running regional dispute has far-reaching humanitarian and geopolitical implications, but it’s also politically potent locally: The Los Angeles area is home to the largest concentration of Armenians outside of Armenia, a diaspora with deep roots in the city.

It’s not unusual to see individual City Council members releasing statements about developments in Nagorno-Karabakh, an enclave less than half the size of Los Angeles County and more than 7,000 miles away.

The City Council has also issued a number of resolutions on the region in recent years, including one in 2013 that recognized “the independent and sovereign Republic of Artsakh” and called on the international community to also recognize the enclave as an independent state. (The region has been internationally recognized as part of Azerbaijan since Armenia and Azerbaijan gained independence from the fallen Soviet Union.)

“The Armenian community has been an active part of L.A.’s political structure for decades now,” said Areen Ibranossian, a Los Angeles political consultant and former chief of staff to Krekorian, the council’s first Armenian American president.

Though city politicians have little say in U.S. foreign policy, Ibranossian said that local measures like Bass and Krekorian’s letter “create an incentive structure for action” at higher levels of government.

“Los Angeles is a global city that is home to hundreds of thousands of members of the Armenian diaspora,” Bass spokesperson Zach Seidl said when asked why she chose to weigh in as mayor of L.A. “This is an issue Mayor Bass has a long history on, including the more than a decade-long span when she served as the top-ranking Democrat on the House Foreign Affairs Subcommittee on Africa, Global Health, and Global Human Rights and during her time serving in Sacramento.”

The letter was released a day after several dozen protesters rallied outside Getty House, Bass’ official residence, to build awareness of the blockade. Bass had already spoken to Krekorian about signing on to the letter the week before, Seidl said.

“The people of Los Angeles, whether Armenian or not, care about human rights, care about peace and stability, and care about the rule of law. The situation in Artsakh right now is a threat to all of those things,” Krekorian said Thursday, describing the region’s population as facing “imminent starvation and potential genocide.”

Bass and Krekorian’s letter makes a number of concrete demands for a U.S. response, including providing “direct U.S. humanitarian assistance to Artsakh,” insisting that Russian troops in the area be replaced by international peacekeepers and asserting U.S. diplomatic engagement to facilitate negotiations between Azerbaijan and ethnic Armenian leaders in the separatist region.

Salpi Ghazarian, director of the USC Institute of Armenian Studies, described the Lachin corridor as “a lifeline” to the region.

“When you block this one corridor, which is what Azerbaijan has now done for nearly a month, you are in effect saying no food can come in, no medical aid can come in, no one can leave for any purpose, including medical, and so you’re strangling a population,” Ghazarian said.

The battle over the territory is the longest-running conflict in post-Soviet Eurasia, according to the nonpartisan think tank International Crisis Group.

Fighting reignited in fall 2020, with a six-week war that left more than 6,700 dead and drew international attention to Nagorno-Karabakh.

The 2020 war loomed particularly large in the Los Angeles area, where thousands of Armenian Americans took to the streets to protest, elected officials gathered in solidarity at City Hall and a number of local Armenian Americans even uprooted their lives to join the fight in their home country.

Los Angeles County has been home to a substantial Armenian population for more than a century, with global events triggering successive waves of migration.

Ghazarian said many Armenians in the Los Angeles area are deeply “connected to Artsakh” through a number of cultural, collaborative and aid programs that help support the region.

“The other type of connection is that Armenians in L.A., especially the immigrants of the last 20 or 30 years, have relatives in Armenia who are also at the front line,” Ghazarian said. “Over the last two or three years, people have lost brothers, sons, uncles, cousins. It’s a really direct emotional and familial connection.”


Shane Gillis Should Thank ‘SNL’ for Canceling Him