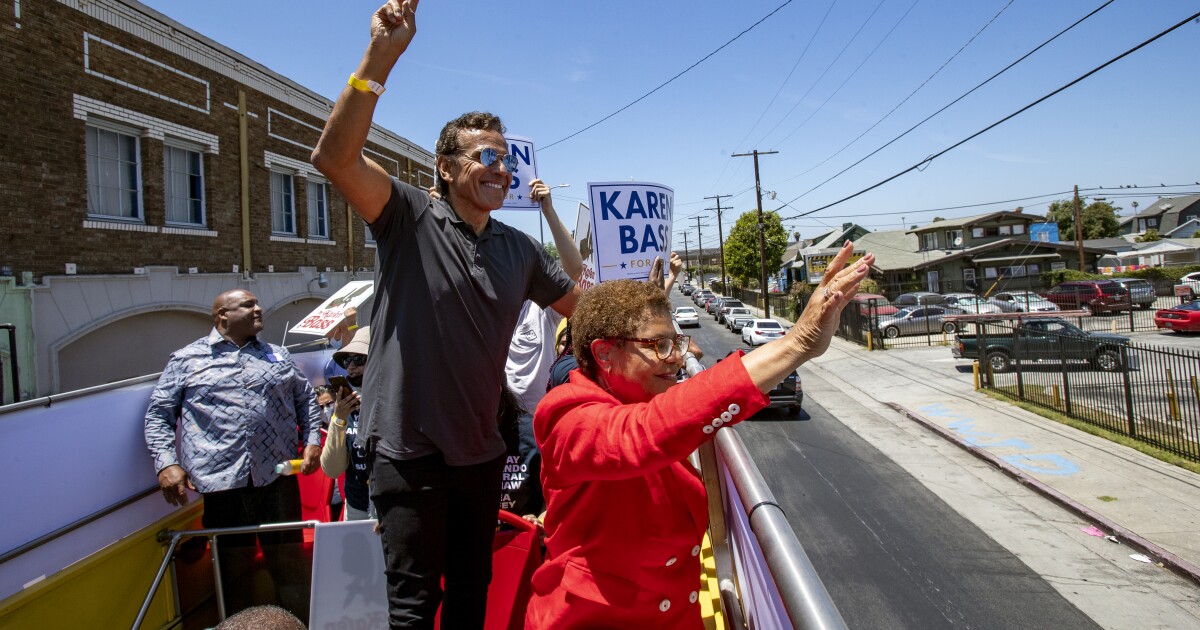 Los Angeles mayoral candidates visited neighborhoods from Boyle Heights to Mar Vista to Woodland Hills over the weekend, pushing for votes ahead of Tuesday’s primary election.

Rep. Karen Bass, who was joined by former Mayor Antonio Villaraigosa, rode atop a double-decker Starline Tour bus crisscrossing through LA on Sunday. Dressed in a red linen suit, Bass danced jubilantly to the 1979 disco hit “Ain’t No Stopping Us Now.”

One man craned his head out of his car window to yell, “You got my vote, baby!”

The Bass campaign was buoyed by a poll released Sunday showing her with the support of 38% of likely voters. Her nearest rival, developer Rick Caruso, has 32%, according to the UC Berkeley Institute of Governmental Studies poll, co-sponsored by The Times. City Councilman Kevin de León trailed with 6%.

Standing outside an Armenian grocery store in North Hollywood on Sunday, De León told reporters he wasn’t focused on polls, but turnout on election day. The councilman, who wore cowboy boots, a white button-down shirt and jeans, also said he did not have tens of millions of dollars “to blitz media outlets with false promises.”

The jab was directed at Caruso, whose spending has dominated coverage of the election. His omnipresent advertising tells voters “Caruso Can” – the developer’s promise to fix homelessness, City Hall corruption and dirty streets.

Tuesday’s primary marks the first open mayoral election in nearly a decade. Mayor Eric Garcetti faces term limits and must step down in December, although he may leave sooner if he is confirmed by the Senate to be US ambassador to India.

Turnout in the election has been low, with campaign research company Political Data Inc. reporting Friday that just 10% of ballots sent to city residents had been returned. PDI Vice President Paul Mitchell said he expects about 25% voter turnout in the city.

“When turnout is this low with less than a week to go, you can not imagine that there’s going to be some mad rush,” Mitchell said last week.

Activist Gina Viola, a mayoral candidate backed by leaders of Black Lives Matter-Los Angeles who is polling at 2%, said she was not anxious about the turnout. “I feel like we normally vote on the last day,” Viola said of LA residents.

Viola and her supporters gathered Sunday outside a home on Laurel Avenue in Beverly Grove to talk to voters headed to the nearby WeHo Pride parade. A large orange banner with Viola’s name hung from a shrub, and a table held Red Vines, packets of Doritos and buttons and T-shirts for voters.

Foot traffic was slow, however. Among those who did pass by was Darrell Wells, 27, of Hollywood, who stopped to pose for photos with Viola. “I’ve been seeing her on social media,” Wells said.

Viola, dressed in a pink T-shirt and jeans, said she’d exchanged a few friendly texts with Bass in recent weeks – a sign that the race isn’t just put-downs.

Still, Caruso has emerged as a target because of his spending power. He did not hold media events Sunday, though his campaign spokesman Peter Ragone said Caruso spent time calling organizations that have endorsed him, asking them to escalate voter turnout efforts. A day earlier, the candidate dropped in at a car show in Woodland Hills sponsored by the Los Angeles Police Department’s Valley Traffic Division.

As he navigated between vintage Ford Mustangs, the developer looked confident and relaxed. “What a great way to spend a Saturday,” said Caruso, who wore dress shoes and a tailored dark suit.

Caruso was endorsed earlier this year by the union that represents rank-and-file police officers. The California Coalition of Law Enforcement Assns., The Assn. for Los Angeles Deputy Sheriffs and the Los Angeles School Police Officers Assn. added their endorsements for him on Friday.

Several police officers – who declined to speak to press at the event because they were in uniform – greeted Caruso warmly as he walked through the park, thanking him or saying they appreciated his support.

Looking out at the small crowd from the stage, Caruso declared his love for the San Fernando Valley before segueing to police.

“I love LAPD and everything LAPD does, so thank god for the LAPD,” ​​Caruso continued. “And I love cars.”

Caruso urged supporters to make sure their friends and families voted, citing the relatively low number of ballots turned in thus far. One supporter seemed surprised, telling Caruso that given all that was wrong in the city, one would think people would at least be coming out to vote.

“I know,” Caruso replied. “I think part of it is a lot of people are just so frustrated that nothing has happened, so maybe their vote does not count.”

Speaking to reporters later, Caruso said: “People are really worried and fed up with where the city is today. That’s what I’m hearing a lot of. ”

Media consultant Helen Sanchez, who is not representing any candidates, offered a similar assessment. She said in an interview last week that she’s hearing the message that people want change.

“People are more angry this time than they have been [in past elections.] They are really angry about homelessness, ”Sanchez said.

Earlier Saturday, Bass took the stage in South LA and told the crowd of volunteers and supporters that they would help get her campaign over the top.

“Those commercials, I can not get away from them,” she said of Caruso’s ad barrage.

“I pick up my phone. I go on YouTube. I turn on the TV. I feel like there’s a stalker. I do not know how to get rid of them. Well, on Tuesday, we can do that, because it’s not the power of the dollar. It’s the power of the people, ”the congresswoman said.

Bass spoke outside her campaign headquarters, where Mike Bear was one of several volunteers who instructed canvassers on how to use the app that would tell them which doors to knock on.

Bear, a retired teacher, had members of the group role-play as well. “If you get stuck, come back to what it means to you to vote for Bass,” Bear advised.

De León hit up a Los Angeles City College swap meet in East Hollywood on Saturday, his rescue dog Whiskey in tow. As the politician spoke to a TV news crew, an aide deftly removed dog hair from the back of the candidate’s shirt with a lint-roller while ducking out of the cameraman’s frame.

Many shoppers greeted the councilman in Spanish and crowded in for excited selfies and questions, while others wondered aloud about what was going on.

De León also stumped for votes on Sunday in North Hollywood. He walked around the Olive Fresh Garden Marketplace, a store run by three Armenian American brothers, and shook hands with workers. One of the brothers, Asatur Shishikyan, 57, said the candidate had his vote.

The councilman traveled to about 20 locations over the weekend. In a lighthearted moment, De León told reporters that “just one” person yelled at him – when he visited Northridge.

“They said they want the city of LA to be one giant Grove,” said De León, referring to Caruso’s mall in the Fairfax district. “I disagree. I do not think we should be one giant shopping mall. ”