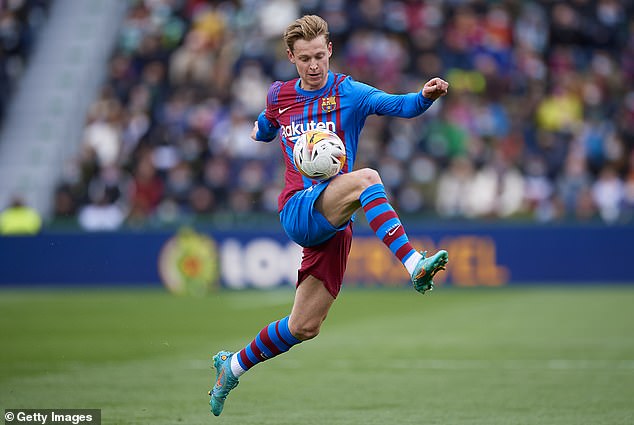 By Michael Rudling For Mailonline

Frenkie de Jong’s appears to be moving towards a transfer after reportedly ‘clearing out his locker’ at Barcelona.

The midfielder has been courted by Manchester United in recent months as they look to replace the departing Paul Pogba.

De Jong has previously worked with new Man United boss Erik Ten Hag. They won the domestic double and reached a Champions League final together in 2019.

According to reports in AS, Barca have ‘intensified contact’ with interested clubs as they look to sell the Dutch international for £ 80m, £ 20m more than United have offered.

They also reported that de Jong has ‘cleared out his locker’ at the Barcelona training ground.

The 25-year-old has been a regular at the club for the past three years, playing 140 games across all competitions and scoring 13 goals.

It has been a rare quiet period for Barcelona, ​​though, as they have picked up just one trophy.

Selling de Jong could prove to be a good move for the club as they have been hampered by recent financial issues.

Man United fans will also be excited about the midfielder’s potential arrival as the club eyes a return to the Premier League top four.