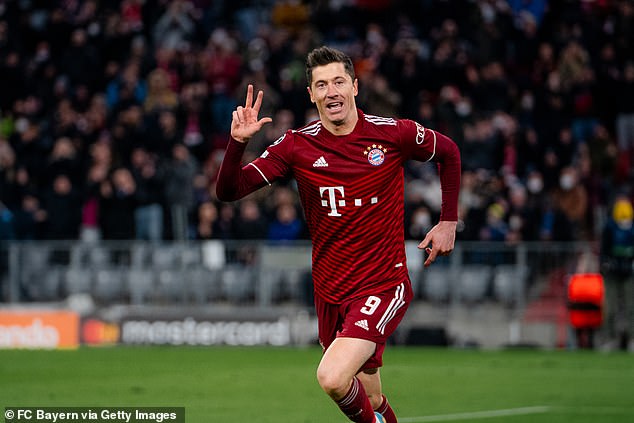 By Max Mathews For Mailonline

Barcelona will turn their attention to signing Robert Lewandowski after missing out on Erling Haaland, according to reports in Spain.

Borussia Dortmund star Haaland has sensationally agreed a deal to sign for Manchester City this summer, meaning the Spanish giants will be spurned in pursuit of their top target.

And according to Football Espana, Bayern Munich hotshot Lewandowski is next on their shopping list.

The Catalan side have largely focused on free transfers like Pierre-Emerick Aubameyang and Eric Garcia, loans like Adama Traore and Luuk de Jong and promoting youth players like Nico and Gavi amid their serious financial problems.

The Polish target man, 33, is out of contract in summer 2023 and Bayern are yet to start talks regarding an extension.

Lewandowski could therefore become available for a transfer this summer so the German giants can avoid losing him for nothing the following year – giving Barcelona the chance to sign one of Europe’s top marksmen on the cheap.

Xavi’s side are said to be aiming for low-cost goalkeeping, defensive and midfield options so they can go for broke on signing a top striker.

But the experienced 128-cap international is still delivering at the highest level despite his age, with 42 goals in 35 appearances in all competitions this season and an astonishing 145 goals in 122 matches across the last three campaigns.