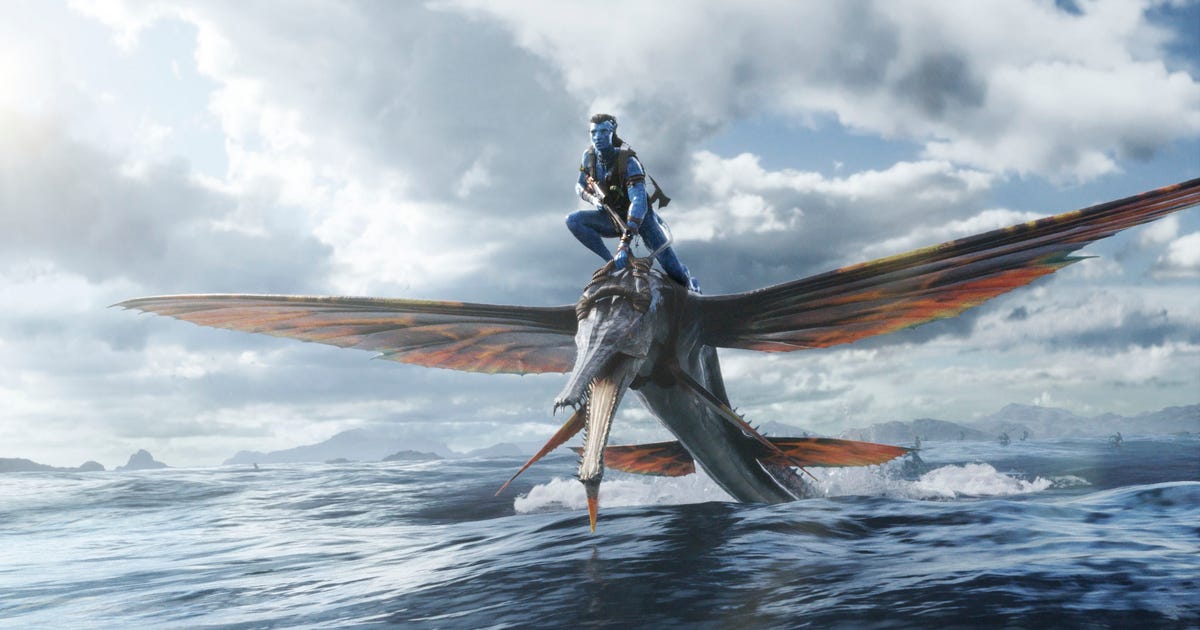 Avatar: The Way of Water came to theaters on Friday, 13 years after the blockbuster original wowed moviegoers with its incredible 3D visuals. Director James Cameron is back for more adventures on the lush world of Pandora, along with original stars Sam Worthington and Zoe Saldaña back as Na’vi heroes Jake Sully and Neytiri.

“The parental anguish and the engaging journeys of the young characters give The Way of Water emotional heft,” CNET’s Richard Trenholm said in his review. “The sci-fi action is cathartic and exciting, the environmental message is irresistible, and the visuals are just incredible.”

The movie’s Disney Plus release date hasn’t been announced yet, but the first movie is available there if you want a trip to Pandora right now.

Jake Sully and Neytiri’s family are key to the sequel’s ending, after the colonialist humans of the Resources Development Administration, or RDA, return to Pandora and wreak havoc on the world’s native life as they seek a replacement for the dying Earth. They also launch a hunt for the treacherous human-turned-Na’vi Sully, leading us to the movie’s final conflict.

It takes place 15 years after the original, and there’s lots to digest, since this movie flings plenty of terminology and events at you in its three-hour-and-17-minute runtime. Let’s dive into the Avatar sequel’s beautiful blue SPOILER waters.

Having been killed by Neytiri in the first movie, Colonel Miles Quaritch (Stephen Lang) and a bunch of his Marine goons have been resurrected in Na’vi bodies with a backup of their human counterparts’ memories. The clone Quaritch was surprised to learn that Miles “Spider” Socorro (Jack Champion), a human who’s grown up with Sully and Neytiri’s kids, was the son he abandoned in his old life.

Having been tasked with slaying Sully for the RDA, Quatrich uses Spider to learn the Na’vi ways and hunt his prey, but he clearly grows fond of the teen despite his claims of indifference. Methinks the Na’vi doth protest too much.

The late RDA scientist Grace Augustine (Sigourney Weaver) acted as bridge between the humans and Na’vi, in addition to spearheading the avatar project that allowed Sully to become one of the blue aliens. We discover that her avatar was pregnant when she died, and gave birth to Kiri (also Sigourney Weaver, who’s amazingly convincing as a teenager). She was adopted by Sully and Neytiri, is a teenager by the time of the sequel and has some kind of special connection with Na’vi deity Eywa.

Fleeing from Quaritch, Sully, Neytiri and their kids take refuge with the Metkayina clan, a group of cool-looking oceanic Na’vi, and try to learn their seafaring ways. Lo’ak also befriends Payakan, an outcast tulkun (supersmart whalelike sea creatures beloved by the Metkayina).

Death in the family

Neteyam — who sure seems like Sully’s favorite kid — is fatally shot in the first confrontation of the final battle, which takes place on a marine hunting vessel that’s been commandeered by Quatrich. His family mourns briefly but leaves to confront their adversary one last time.

Kiri and Tuk manage to get themselves captured again, with Quatrich holding a knife to Kiri’s throat as Sully confronts him. Sneaky Neytiri gives the villain a taste of his own medicine by threatening Spider. Quatrich briefly pretends not to care about his sorta son, but ultimately relents and lets Kiri go.

This leaves Sully and Quatrich to have an intense one-on-one confrontation as the ship sinks (it even rears up like the Titanic). Kiri and Spider manage to flee into the water, while Neytiri and Tuk try to escape through the bowels of the vessel before finding themselves trapped.

It’s a close call, but Sully manages to defeat Quatrich in their nasty underwater fight and leaves him for dead. Sully escapes with the help of Lo’ak and the breathing technique he learned with Metkayina, with tulkun pal Payakan joining for the final stretch.

Kiri uses her connection with Eywa to create a path of bioluminescent fish for Neytiri and Tuk, allowing them to swim to safety.

Spider makes the morally decent but logically questionable decision to save the unconscious Quatrich before he drowns. The baddie flies off on his ikran because he has to return in a sequel, while Spider returns to his Na’vi family. Character development for everybody.

After the battle, Sully and Neytiri lay their lost son Neteyam to rest in the ocean. His body is embraced by the algae, hinting that he’s returning to Eywa. As a result of their loss, the family is also accepted by the ocean-dwelling Metkayina clan as their own.

Sully and Neytiri go to the Cave of the Ancestors and connect to the Metkayina’s spiritual tree, allowing them to commune with Eywa. It allows them to see Neteyam, who fluctuates between his teenage self and a child as he talks to Sully. It suggests that the being they encountered is a mixture of Neteyam’s spiritual energy and his parents’ memories of him.

Sully accepts they can’t keep running from the human invaders — they have to fight. I guess that’ll happen in Avatars 3, 4 and 5 (scheduled to come out in 2024, 2026 and 2028). The final shot sees Sully opening his eyes, mirroring the end of the first movie.

Is there a post-credits tease?

You don’t need to sit through Avatar: The Way of Water’s long credits sequence for a hint about the third movie, it doesn’t have a mid- or post-credits scene. There are beautiful interpretations of some imagery from the movie in the initial credits sequence though, so it’s worth sticking around for that.

You might also want to go to the bathroom or get some fresh air after sitting for more than three hours.

New Movies Coming in 2023 From Marvel, Netflix, DC and More