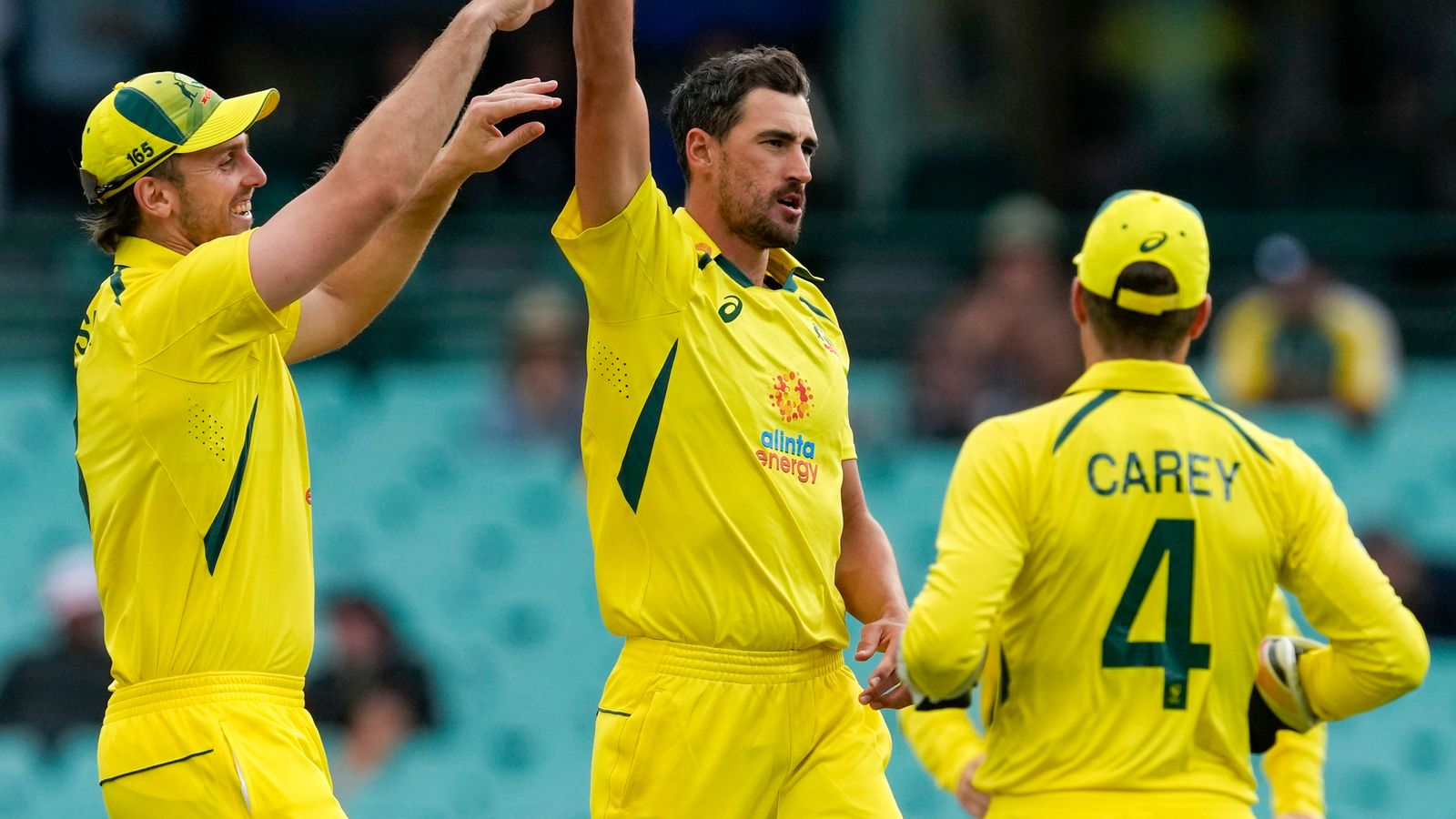 Australia claimed a convincing 72-run victory over England in the second ODI in Sydney to seal a series victory with one match remaining.

But Josh Hazlewood (2-33), filling in as Australia captain for Pat Cummins, pinned Vince lbw to break the partnership and spark a collapse as England fell to 208 all out.

Mitchell Starc (4-47) and Adam Zampa (4-45) starred with the ball for the hosts, with Starc dismissing both Jason Roy and Dawid Malan for ducks in the opening over of England’s reply.

Earlier, Steve Smith’s 94 and half-centuries from Marnus Labuschagne (58) and Mitchell Marsh (50) had propelled Australia to 280-8 from their 50 overs, with the recalled Adil Rashid (3-57) the pick of the England bowlers.

Australia also had a new skipper, with Hazlewood deputising for Cummings, who took two wickets to seal his first win as captain.

England got off to the worst possible start in the run chase, losing two wickets in the first over.

Starc got the wicket of Jason Roy with the second ball and then bowled Dawid Malan with a great delivery, with both batsmen departing for ducks.

Phil Salt and Vince steadied the innings, with the opener finding the boundary regularly. But Hazlewood had his first wicket as captain in the fifth over.

Salt looked to give himself room on the off-side, but it was a poor shot choice, and he lost his leg stump after hitting 23 runs from 16 balls.

Zampa and Starc star with the ball

England were in desperate need of a partnership, and that is exactly what Vince and Billings did. They both hit half-centuries as England countered, sharing a century partnership.

Vince hit 60 from 72 balls as he helped England rebuild after losing early wickets but with Australia seeking a breakthrough, Hazlewood brought himself on and DRS confirmed that he had Vince out lbw on umpire’s call.

Moeen hit consecutive boundaries off Zampa, but he was deceived by the wrong-un and was out for just 10 runs.

Zampa then bowled Billings (71), who was looking to charge down mid-on, to swing the match back Australia’s way. He had two wickets from the over, after Curran looked for a big shot but could only find Hazlewood.

Starc then bowled Woakes and Willey with England needing less than 100 runs to win. Zampa took the final wicket of Liam Dawson, which was confirmed leg before after a DRS review.

David Warner (16) and Travis Head (19) got the hosts of to a good start, taking Australia to 33 before Moeen struck in the fifth over.

Rashid was the pick of the bowlers for England, finishing with figures of 3-57.

After the hosts raced to 33 without loss, Moeen brought himself on to bowl, a decision that was vindicated when Warner swept to Dawson inside the ring at square leg.

Woakes was expensive in his first three overs, conceding 20, but tightened up and used variations to restrict the scoring.

But a quicker delivering into the pitch did for Head, whose pull shot caught a top edge and ballooned to Moeen at midwicket.

Smith anchored the innings, while Labuschange made a fast start, whipping Moeen over the rope for six after just his second ball.

He used his feet well against the spinners, hitting 58 from 55 balls, but Rashid made the breakthrough as Labuschange attempted a sweep shot, only for it to loop to mid-off.

The leg spinner had two in two balls, when Alex Carey missed a cross-bat shot and was stumped by Billings, who deputised with the gloves in Buttler’s absence.

With Australia slipping to 144-4, Smith began to attack, hitting Rashid and Dawson for four, before clattering Curran over deep square leg.

He looked on course for another trademark century, but holed out in Rashid’s final over, six runs short of his 100.

England restricted Australia in the final 10 overs, with Woakes bowling Stoinis and Willey taking two wickets in successive deliveries in the 49th over.

But a late cameo from Ashton Agar, who hit 16 off Curran in the final over, took Australia to an above par score of 280.

Speaking to BT Sport, England’s Sam Billings, said: “Those early wickets pegged us back and we had to rebuild. I think Australia’s score was probably above par on that pitch.

“It was pretty two-paced and up-and-down at points. It was a real shame Vincey and I couldn’t go on for another 10 overs. It was a disappointing loss.

“For more than half the group who have obviously been out here for a long time, it is about trying to muster up the energy for one last game.

“For the players who have had limited opportunities and came in a week ago, it is a huge opportunity for us to stake a claim and be that energy for the group. It’s not every day you play at the MCG against Australia so there should be no lack of ambition.”

Adam Zampa took four wickets, including the dangerous Billings to spark a collapse.

Speaking to BT Sport, he said: “It’s a series win against a really good side, so it is important for us. We feel like we have played some really good cricket.

“We got a couple of big wickets at the right time. It was going to be tough for England to back up after the World Cup, but it was still good for us to beat a good team.”

The ODI series ends in Melbourne on Tuesday, with England returning to the ground where they won the T20 World Cup. Jos Buttler’s side will be hoping to avoid a series whitewash in their last match of the year.

The third match begins at 3.20am UK time, with over-by-over text commentary from the match live on the Sky Sports website and app.

Interviews with lawyers, analysts, and employees at AI startups on unresolved questions concerning copyright and fair use shaping the future of generative AI (James Vincent/The Verge)