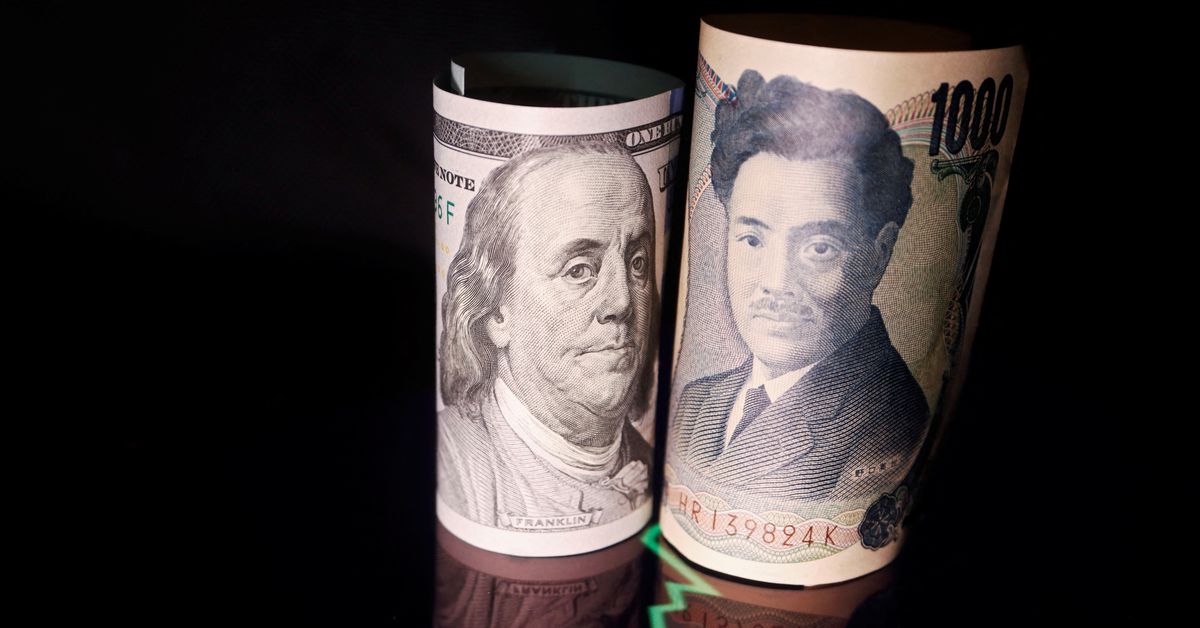 Japanese yen and US dollar banknotes are seen with a currency exchange rate graph in this illustration picture taken June 16, 2022. REUTERS/Florence Lo/Illustration

HONG KONG, Aug 2 (Reuters) – The US dollar slid to its lowest level in two months against the recovering Japanese yen while the Aussie dollar tumbled even after the central bank raised rates, as investors reposition for less aggressive interest rate rises globally.

Jitters about the impact of an impending visit to Taiwan by US House of Representatives Speaker Nancy Pelosi were also driving some safe-haven flows to the yen, while weighing on other Asian currencies and other risk-friendly assets like stocks. read more

The greenback fell as low as 130.4 yen in early trading, its lowest since June 3, and was last down 0.55%, leaving it with more than a 4% decline in the past four sessions.

“It’s the same old story with the yen being very sensitive to the gap between US and Japanese government bond yields. Of course Japanese ones aren’t moving because of Japan’s yield curve control policy, but US yields have dropped a lot,” said Redmond Wong, market strategist at Saxo Markets Hong Kong

The benchmark 10-year Treasury yield fell to 2,516%, its lowest since April, on Tuesday. Investors are beginning to position themselves for the US Federal Reserve to pivot away from raising interest rates aggressively to combat inflation and towards worrying more about an economic slowdown.

Wong said this repricing of expectations for Fed rate hikes was probably overdone and lower energy prices were also helping the yen, since Japan was a net importer of energy. The currency was also benefiting from some safe-haven flows due to worries about Pelosi’s visit.

In a similar vein, the Australian dollar slipped 1% after the Reserve Bank of Australia raised rates by 50 basis points to 1.85%, in line with expectations. The bank said that even though more tightening was expected, it was not on a pre-set path. read more

CBA analysts said in a note to clients that the central bank’s remarks implied “a pragmatism in how the RBA will make policy decisions over the period ahead. We do not believe they are in a rush to take the policy rate much above their estimate of neutral (around 2.5%).”

China’s offshore yuan touched 6.7957 per dollar on Tuesday, its weakest since mid-May. Wong attributed this partly to the tensions surrounding Pelosi’s visit as well as poor economic data from China over the weekend.

The Taiwan dollar slipped to its lowest levels in more than two years, as the dollar climbed 0.2% past the symbolic 30 level. (.TWII)

The greenback was also weaker generally, with sterling at $1,225, just off a five-week peak hit overnight, and the euro was also on the front foot at $1,0274.

This sent the dollar index, which measures the greenback against six peers, down 0.19% to 105.2, a one-month low.