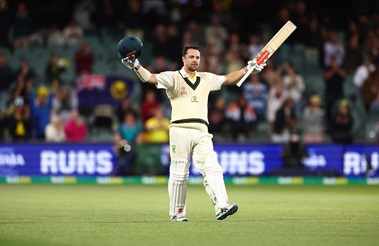 Test cricket is the true assessment of a batter’s ability to focus and his determination to build an innings from scratch. However, Cameron Green suffered two lapses in concentration, both of which cost Australia wickets including that of Travis Head who seemed destined for a double century.

Australia declared on 511/7 on day two of the second Test against West Indies in Adelaide but could have added substantially to that total had they not suffered a mini-collapse in the session before Tea. After a scintillating 297-run partnership between Travis Head and Marnus Labuschagne ended with the latter getting caught behind for a valiant 163, all-rounder Cameron Green walked in to bat for the first time in the series so far.

The West Australian youngster did not look comfortable right from the offset and struggled to get going against a West Indies attack that had barely looked threatening throughout the match. While the Kangaroos waited for him to amp up the scoring in hopes of a quick declaration, the 23-year-old added salt to their wounds by sending the well-set Travis Head back to the pavilion. Having struck out for 99 in the previous game, Head had scored his first Test ton on his home ground in Adelaide and added 75 runs more on the second day en route to what seemed like a certain double century. However, in the 120th over, he became victim to a miscommunication with Green in the middle of the pitch after the batter refused to return for two despite pushing for it initially. By the time Head turned back and tried to get to safety, it was too late and the bails were dislodged in time by keeper Joshua da Silva to resign Head to disappointment.

Even so, Green was not done yet earning the fury of the crowd. Just 15 balls later, he was up against Alzarri Joseph who rattled in the first ball of the 123rd over at good length just outside off. Green decided not to play the ball and let it travel to the keeper but seemed to be caught in two minds as the Kookaburra occurred him, eventually executing a lame half-leave. The batter was not quick enough with his instincts to lift the bat in time causing the cherry to hit the toe end of his bat and clatter into the stumps, making for a comical and bizarre dismissal.

Green’s batting earned a lot of flak from Twiteratti, especially South Australians, as the social media platform was flooded with criticism for the all-rounder.

Not a good sight to spectators!

That was huge mess up!

Come on Cameron Green. Completely feeds Travis Head to the wolves and then gets out himself. #AUSvWI

Cameron Green runs out the main scorer.. chews up 7 overs for 9 runs then tosses his wicket away.. I just see nothing in this guy.#AUSvsWI

Life is all about mistakes and learning from them!

Cameron Green will learn from this. Don’t let others emotions or his part in the run out affect his performance. It’s done, in the past.
Make it up by scoring for his aggrieved partner.#AUSvsWI

@cricketcomau Give up on Cameron Green being a batsman. He’s an out and out Bowler.

What a waste!
Cameron Green labouring with the bat, gets Head run out. Carey should bat higher up the order than Green.#AUSvWI

How bad is Cameron Green looking ?? Absolutely terrible. The best thing for Aust at the moment is for Green to get out – we need some quick runs.