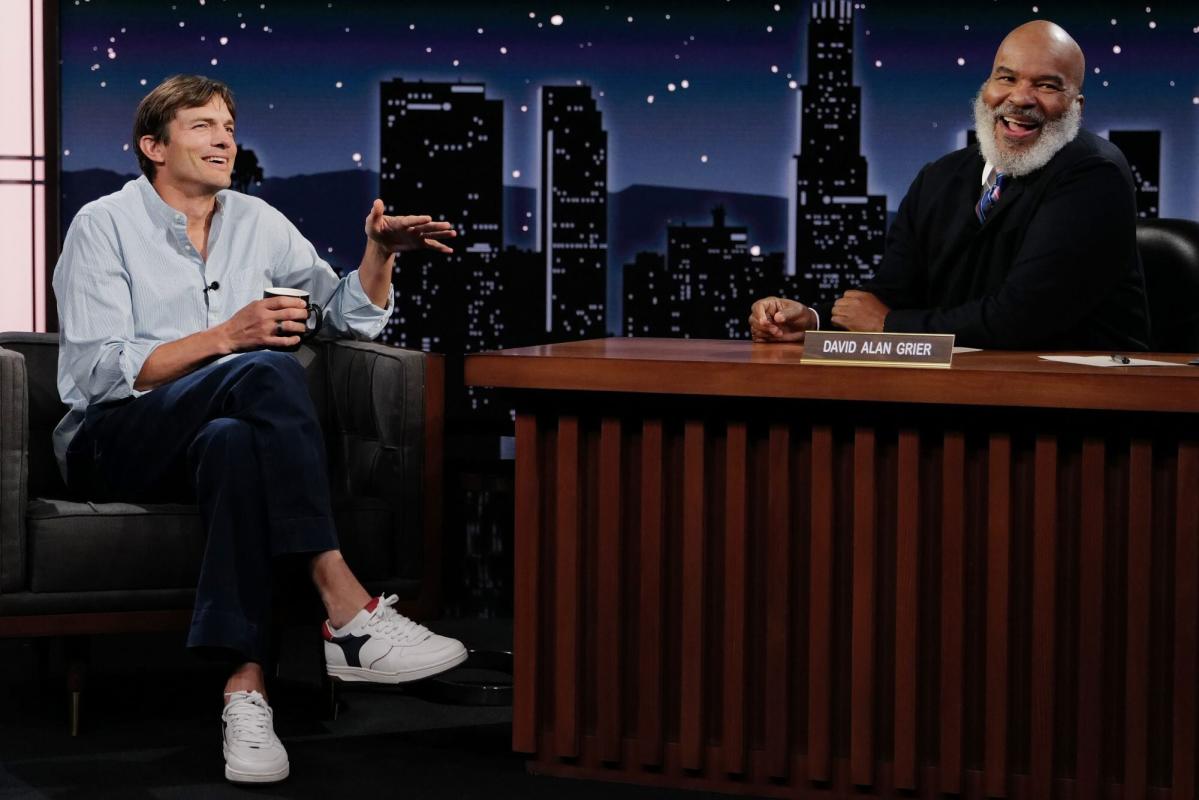 Mila Kunis is there for Ashton Kutcher — mustache and all!

During an appearance on Jimmy Kimmel Live Thursday with guest host David Alan Grier, the What Happens in Vegas star, 44, opened up about his facial hair transformation for his latest movie Vengeance.

In the movie, Kutcher’s character, rural Texas music producer Quentin Sellers, has a pencil-thin mustache. “This character, when I first saw it, I was like, ‘This is interesting.’ He kinda had this Boss Hog vibe to him,” Kutcher recalled, remembering such “bad guys” with thin mustaches in Cannonball Run spirit Smokey and the Bandit. “I was like, ‘Alright, I think this guy has got, like, this air of sophistication.’ “

“Then my wife had to deal with it and that was all fun,” Kutcher said of Kunis, 38.

When asked by Grier, 66, how she took his facial hair, Kutcher said Kunis was very accepting. “We’ve been together for seven years, so when I brought home the mustache she was like, ‘Oh it’s like a different guy!'” Kutcher said.

As for the movie itself, Vengeance marks BJ Novak’s first time as star and director. “BJ had this amazing screenplay that he wrote and he came to me and he was like, ‘Hey, I’m gonna direct this thing, this is going to be my directorial debut and there’s a role I want you to play,'” Kutcher said.

After reading the script, Kutcher was impressed and agreed to join the project. He added, “It was one of the best scripts I’ve read in like a decade because I think it captured exactly where America is right now.”

Kutcher also explained the movie in his own words: “It’s about a New York podcaster that goes to southwest Texas to basically prove to everybody how dumb they are and he gets a lesson along the way.” The actor said the movie is “beautiful, but very funny.”

Besides Vengeance, Kutcher has another long-awaited project coming out soon: Netflix’s spin-off show of That ’70s Show — That ’90s Show.

RELATED: Mila Kunis and Ashton Kutcher Speak Out About the War in Her Native Ukraine, Donating $3 Million

That ’90s Show will center on Leia (Callie Haverda), the daughter of ’70s leads Eric Forman (Grace) and Donna Pinciotti’s (Prepon), as she visits her grandparents Kitty (Rupp) and Red Forman (Smith) for the summer. Naturally, Kutcher, Kunis and Valderrama are set to make special guest appearances.

During a previous Vengeance red carpet, Kutcher shared that he and Kunis sat down for a conversation before they signed on to revisit their characters.

“Mila and I were contemplating it,” he told Variety. “We thought, ‘Listen, we’re only in the position that we’re in because of that show, so let’s just go back and do this. We just went back and had fun for a week. It was so random and fun .'”

Never miss a story — sign up for PEOPLE’s free daily newsletter to stay up-to-date on the best of what PEOPLE has to offer, from juicy celebrity news to compelling human interest stories.

Noting that the “new cast is phenomenal,” he added, “It was really nostalgic to be back on the set. It’s all the same folks that made That ’70s Showso it was pretty bizarre.”

While no premiere date for That ’90s Show has been seen Vengeance is currently in theatres.