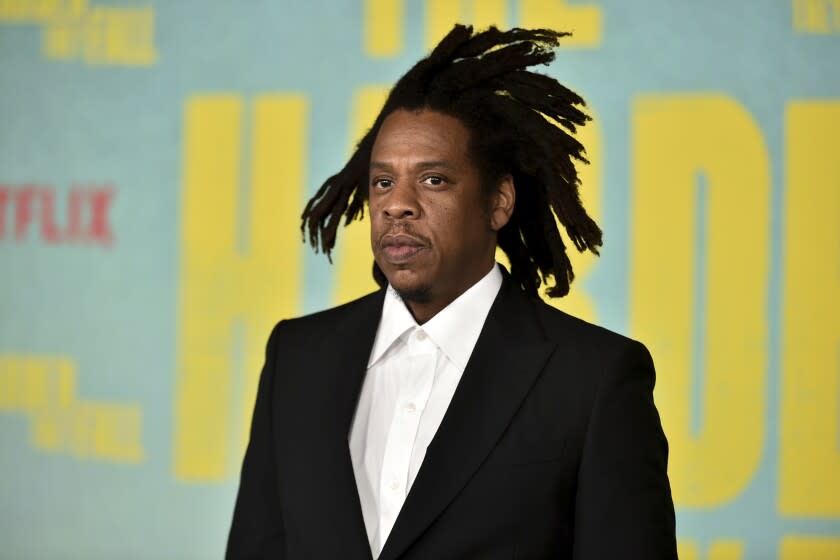 Jay-Z, whose wife Beyoncé is performing Sunday at the Academy Awards, is staying mum about plans to hold his Oscars after-party at Bar Marmont despite pushback from the hospitality workers union that has facilitated a boycott of Chateau Marmont for more than a year over alleged mistreatment of hotel employees.

The rapper’s team had no comment Friday about the situation, which surfaced earlier this week.

The party has been known for its tightly held guest list and low-key presence, with no red carpet arrivals or photographers, much like Madonna and manager Guy Oseary’s elite post-Oscars bash.

The so-called Gold Party debuted at Chateau Marmont after the 2018 Oscars and has repeated there each year since, except for 2021, when it was nixed due to the pandemic. Bar Marmont is a separate lease-out property adjacent to the hotel that was undergoing renovations when the pandemic started. Hotelier André Balazs’ Chateau Holdings owns both properties.

Chateau Marmont, which opened as an apartment building in the late 1920s, has been a non-union hotel since it was converted to that purpose in 1931. It maintains that it pays its workers better than union contracts require, with benefits including free health insurance .

But two former hotel employees and the union Unite Here Local 11 have been in a standoff with Chateau Marmont since the height of the pandemic. The hotel abruptly fired its nearly 250-person staff in 2020 with no severance pay and only a brief extension of health benefits.

A source close to the situation said the rapper is bringing in his own team to staff the after-party, with no workers being provided by Chateau Marmont.

The boycott, which started in February 2021, came in the wake of a September 2020 investigation by the Hollywood Reporter that relied on accounts from 30 former Chateau staffers. In part, they described guests’ alleged debauchery and inappropriate behavior toward employees, complicated by what it called “neglectful” management and the lack of a formal human resources department.

“People think, ‘It’s the Chateau!’ and they can get away with anything, “former guest relations staffer Jimmy Cahue, who started at the hotel in 1995, told THR in 2020.” And the truth is, we do not even bother telling anybody anything anymore because we do not think anything will ever get done because management will never address the situation. ”

At the time the investigation was done, Chateau Marmont and Balazs strongly denied all allegations.

The hotel did not close during the pandemic, but instead immediately rehired more than two dozen of its fired workers to keep limited services running for its long-term guests. A few months later, Balazs announced plans to convert the Chateau to a members-only private hotel, but so far that plan has not come to fruition. It’s unclear whether it’s still a goal.

The hotel is now operating with limited capacity as it has managed to hire back only about 50 of its former workers, a spokesman said, in line with Los Angeles’ 2021 ordinance protecting longer-tenured workers who were displaced by the pandemic from being replaced by lower-paid new hires. Other former employees had moved out of the area, did not want to work at the hotel during the pandemic or declined to return for personal reasons, the spokesman said.

While the spokesman for Chateau Marmont characterized the hotel and Bar Marmont as separate entities – the event space is down the hill from the hotel and has a separate entrance – a union official called it “all one big hospitality operation.” Unite Here Local 11 represents hospitality workers in California and Arizona, though it does not represent any Chateau Marmont employees.

Lawsuits were filed against the hotel in early 2021 by two former employees, both Black women, who alleged among other things that the hotel had allowed a hostile work environment where wealthy guests could do whatever they wanted, including berating and inappropriately touching employees, and had engaged in racial discrimination and retaliation. Both cases were dismissed months after being filed, in line with mandatory arbitration agreements.

The hotel has denied the allegations in the lawsuits.

“These meritless allegations are all unproven for one simple reason: They were manufactured in lawsuits bought and paid for by Unite Here Local 11 as part of their targeted efforts to unionize Chateau Marmont,” a spokesman for the hotel told The Times on Thursday. ” Contrary to the bogus claims in these already-dismissed, union-backed sham filings, Chateau Marmont has a long and well-documented history of diversity and inclusion among both our employees and our guests. “

The spokesman said union representatives had trespassed on Chateau Marmont property and yelled at hotel guests during actions it said were in support of the workers.

The boycott has drawn support from the California Democratic Party as well as the actors union SAG-AFTRA and the Writers Guild of America. Aaron Sorkin’s Oscar-nominated movie “Being the Ricardos” and the Paramount + miniseries “The Offer” both decided against filming at the storied hotel upon learning of the hospitality union’s boycott.

Director Adam McKay and David Sirota, who share an Oscar nomination for original screenplay for 2021’s “Don’t Look Up,” are the most recent Hollywood types to sign the boycott petition, a union spokeswoman said.

Kurt Peterson, co-president of Unite Here Local 11, said the union is planning to protest with a “festive dance party” and picket signs in the street outside Chateau Marmont starting at 8 pm Sunday and going “as late as necessary.” He said he hoped some of Jay-Z’s guests would stop dancing with them rather than going inside the venue for the after-party.

In prior years, those guests have included – to name but a few – Rihanna, Adele, Travis Scott, ASAP Rocky, Drake, Diddy, Adam Driver, Natalie Portman, Leonardo DiCaprio and the couple formerly known as Kimye.

Calling Jay-Z’s decision to use Bar Marmont “not morally good,” Petersen said: “They need to find another space to rent.”