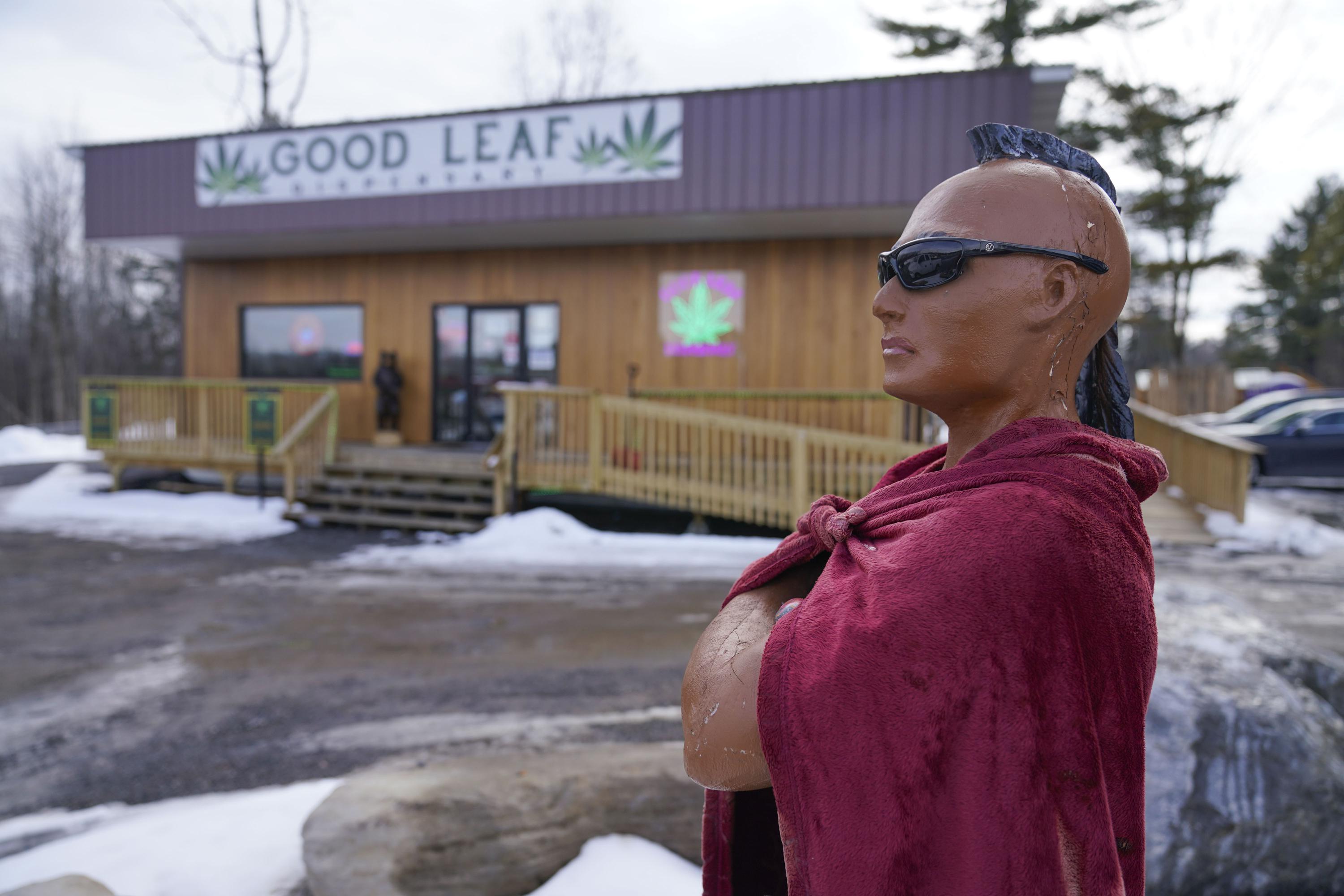 ST. REGIS MOHAWK RESERVATION, NY (AP) – As New York inches toward launching a retail marijuana market, sales of buds and edibles are already flourishing on some Native American land around the state.

Shops dot the main road through the US side of Mohawk territory straddling the Canadian border. In the Finger Lakes, the Cayuga Nation is selling marijuana at two stores. Native Americans have opened more stores in western New York on Seneca territory.

Many of these shops are small and far from big cities, and there’s an internal dispute over the legality of about a dozen operations on the St. Regis Mohawk Reservation. But the sales show how Native Americans have been able to tap early into what is expected to be a multibillion-dollar statewide market. Native Americans call it an expression of their sovereignty and a way to bring much-needed economic activity to their territory.

“I think this is a relief valve for our visitors, our friends, our families,” said William Roger Jock, a partner in Good Leaf Dispensary on the land the Mohawks call Akwesasne. “We have been stepped on for so long and to have something like this happen, it’s almost liberating.”

New York legalized adult recreational marijuana a year ago, although statewide retail sales appear months off. State officials say initial sales could begin by the end of the year under a program providing the first licenses to people affected by marijuana-related convictions. Regulations for the entire adult-use market are expected this summer.

In contrast, the Saint Regis Mohawk Tribal Council, which governs on the American side of Akwesasne, adopted an adult-use marijuana ordinance last June that allows business licenses to go to tribal members. The council said in a prepared statement that “there is a short window of time for tribally-licensed cannabis businesses to open ahead of other areas in New York state.”

But shops began opening last year without licenses from the tribal government. Jock and others say their operations are approved by the longhouse, a traditional community, political and spiritual institution.

The reservation’s main road now boasts marijuana shops near others selling low-cost cigarettes and gasoline. The new businesses attract customers like Nick Brooks, who recently purchased gummies while heading back from a trip to Home Depot.

“It’s been in my head for two months, ‘Where can I get gummies?’ And I did not know where to go, but we just passed by, ”he said.

The tribal government last year tried unsuccessfully in court to close seven dispensaries they say opened illegally. This month, they issued cease-and-desist orders against six more operations, though at least some of the stores appeared to be still open this week.

Dispensaries on the Canadian side of the Mohawk territory are separately regulated.

Marijuana remains illegal at the federal level, although New York and 17 other states have legalized recreational marijuana. The Mohawks, like tribes in Michigan and other states, set up their own regulations. New York officials say the dispensaries are legal if they’re on federally recognized, sovereign tribal land.

“It’s legal in the same way that it’s legal in states,” said Heather Trela, a marijuana policy expert at the Rockefeller Institute of Government in Albany. “It’s still federally, obviously, illegal and they do have to make sure not to run amok of federal regulators.”

It’s not clear how many Native American cannabis operations have opened statewide or how they source their product. The overwhelming majority of operators declined to answer questions from The Associated Press.

But it’s clear that more are on the way.

A gleaming new “superstore” called Budders is on track to open along the Mohawk reservation’s main strip in mid-April – with a tribal license. CEO Ryan White seemed unfazed by the existing competition, saying the store’s size and selection of regulated, locally grown products will help give them a long-term advantage.

“We know that there’s a big market for cannabis,” White said. “We see people as far as 50 miles away coming in. They come in for gas and for tobacco products, and we’re going to be targeting them too. ”

The Cayuga Nation, which already sells marijuana at two of its stores in the Finger Lakes, plans to open a cultivation facility before the year ends. The cannabis business “is the next step in expanding and diversifying the Cayuga Nation’s economic opportunities,” they said in a prepared statement.

And near the eastern tip of Long Island, the Shinnecock Indian Nation is working with two outside companies on a cultivation facility and dispensary. Phoenix-based TILT Holdings will provide management services and up to $ 18 million for the operation along the main highway to the Hamptons, about 70 miles (113 kilometers) east of New York City.

Chenae Bullock, a nation member and managing director of Little Beach Harvest, said the operation will provide needed revenue and jobs for people on the territory – many of whom live in poverty in an area synonymous with wealth.

“The ultimate goal is to sustain the people who have been oppressed for 400 years,” she said.