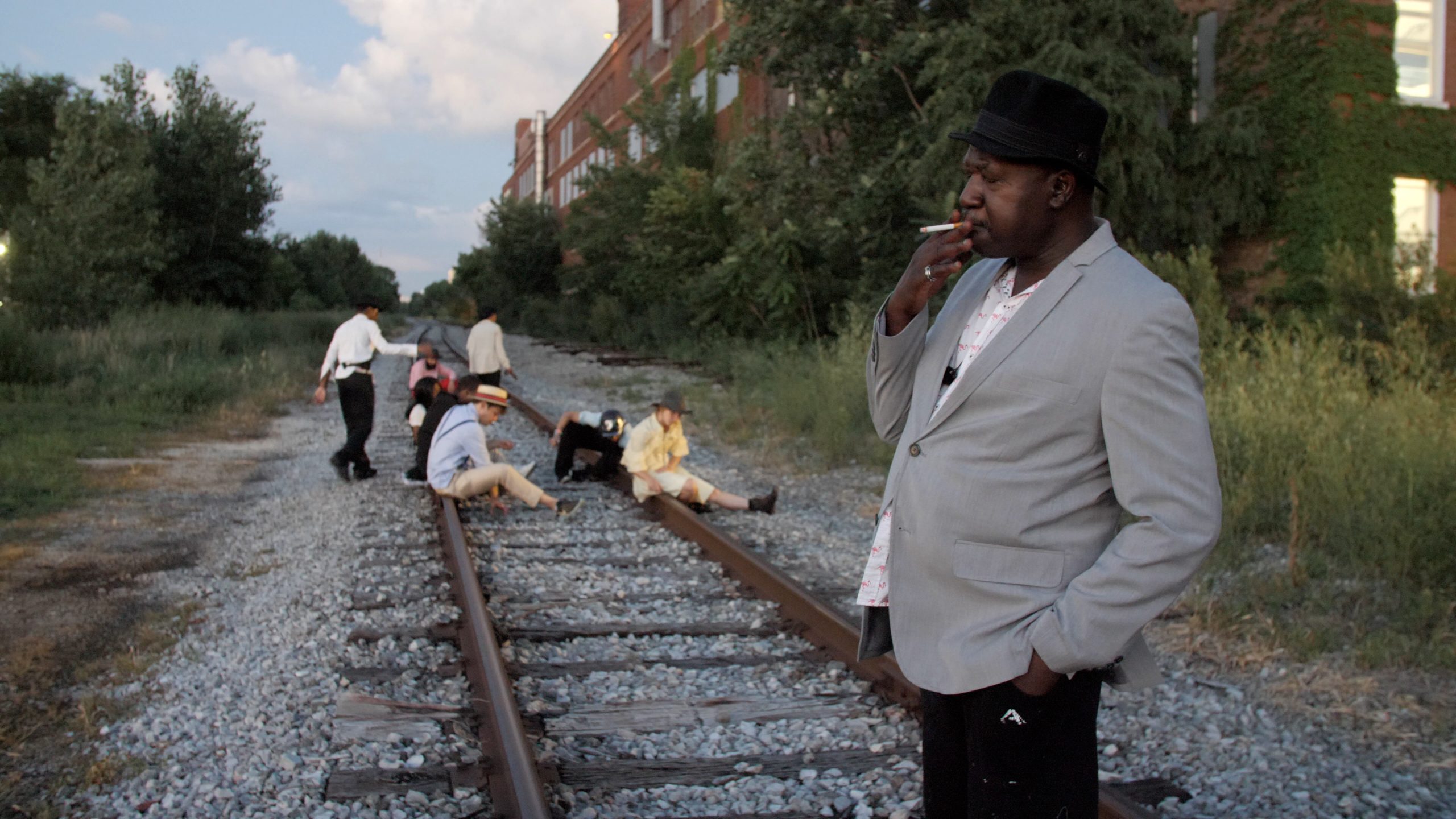 At one point in Theater Y’s ambulatory Laughing Song: A Walking Dream, Marvin Tate as George W. Johnson (the first Black American recording artist) is asked by a reporter at a press conference, “Is your laugh real, or is it fake?” It’s a reasonable question—but by the end of this four-hour show, which weaves together elements of Johnson’s life with Tate’s own experiences growing up in North Lawndale, it also feels utterly beside the point. How do we even know where our laughter comes from? If we stop to examine it, do we kill the fleeting moment of joy? And given everything that happens in the span of our earthly existence, shouldn’t we just be grateful we can laugh at all?

The devised piece, created by Tate and Evan Hill in collaboration with the 12-member cast and directed by Theater Y artistic director Melissa Lorraine, does indeed unfold, as the subtitle promises, in a sort of dream state. If you’re unfamiliar with the landscape of North Lawndale (as I largely was before seeing the show), it’s a chance to see the neighborhood’s broad boulevards and parks lined with vintage greystone buildings (more than any other neighborhood in Chicago), interspersed with boarded-up storefronts that tell the story of decades-long disinvestment in the west-side community. (This is the third installment in Theater Y’s ongoing Camino Project—a series of outdoor walking performances inspired by the Camino de Santiago pilgrimage in Spain.)

This is where Martin Luther King Jr. stayed to highlight the crisis in housing for Black Chicagoans. This is also where activists set up a 47-day protest in “Freedom Square” in 2016 to call attention to the Chicago Police Department’s infamous Homan Square interrogation facility. And it’s where young Marvin Tate first discovered his calling as an artist. Early on in the show, he recounts (as he did in a profile by Reader contributor Jack Helbig) that his childhood encounter with Gwendolyn Brooks’s poem “We Real Cool” helped him find his voice (one that had been hampered by the fact that he had a stutter).

But Tate’s biography is more implied than told, except for a haunting segment that unfolds on some abandoned railroad tracks, where we meet his mother, Ophelia (Cat Evans), who always carried an ice pick for protection and waited for her wandering husband to return . Lamarion Hall embodies the absent father, dressed in black tuxedo pants and a white dress shirt and walking far down the tracks while Ophelia trails at a distance, wearing a bright blue dress and lugging a suitcase—a poetic evocation of romantic longing and loss, as well as a subtle reminder of the Northern Migration that brought Tate’s mother to Chicago.

We learn more direct details about Johnson’s story, which is probably because it’s been largely untold. Some of it is still all too familiar, though—particularly the ways in which the record companies ripped him off. Eric K. Roberts plays “Charles Emerson,” a portmanteau name for Charles Marshall and Victor Emerson, who both heard Johnson singing at a ferry terminal and began recording him on wax cylinders. (Johnson’s biggest hit, “The Laughing Song,” gives the piece its title.) Sometimes Johnson would do the same song in the studio 50 times a day, since the early days of phonography didn’t allow for mass reproduction. (No wonder people wondered if the laugh was “real,” or as one commenter puts it, “Can you still keep your laugh when it’s being sold?”)

After cutting loose Tate’s George and his vaudeville band (mass duplication now being possible, and thus negating the need to keep George on payroll), Roberts, riding a three-wheel bike, leads the audience on one side of the street while the cast berates him for his villainy from the other. It’s a cunning way to highlight the socioeconomic split not just between moguls like Emerson and struggling artists (particularly Black performers), but between largely white neighborhoods that receive tons of private and public perks while communities of color are ignored—until it’s time to exploit them through gentrification and development. (This tour of North Lawndale doesn’t include businesses like Lagunitas and Cinespace, though we do go by the old Sears Tower on Homan, once the headquarters of the retail giant.)

Music and visuals add texture as Johnson’s increasingly sad story unfolds. Both his common-law wives died before him, and he faced murder charges in the death of the second. He was acquitted; a trial scene set in a colonnade gives this part of the story an air of Greek tragedy, with his dead wives standing motionless, shrouded in heavy veils. (The sound of Michael Jackson singing “I’ll Be There” from over the fence at a nearby barbecue added an unplanned piquant touch at the opening.) The ensemble, whom we meet initially as Johnson’s fellow vaudevillians in a “backstage” prologue at a theater (the YMEN Center), play multiple roles and exhibit skills as dancers, clowns, acrobats, and at improvising dialogue with the audience as we stroll along.

August Garrett as young passionate George feels like the hopeful conscience and connective historical tissue between Johnson and Tate, his helmet and goggles suggesting that being ready to tackle the open road is a good way to get through life. A portable stereo wheeled by an ensemble member accompanies us throughout the journey, often playing songs that reference smiles and laughter (“When You’re Smiling,” “Laughter in the Rain,” “My Funny Valentine”).

I didn’t attend either of the previous Theater Y Camino shows, so I can’t say how this one fits in with those excursions. But I can’t imagine a more engaging tour guide than Tate, or a more unique experience in Chicago theater right now. It ends up back at the YMEN Center, where we all share a delicious chicken dinner prepared by chef Joseph Cooper. (And it’s all free, although donations are accepted.)

But before dinner, Tate gathers us all together to practice letting out some big laughs. Are they real or fake? Does it matter? The important thing is that Laughing Song asks us to spend time in a sometimes overlooked community, learning about a lost figure in Black cultural history, in the presence of a contemporary Chicago Renaissance man and an ensemble working hard to help us to appreciate everything around us in light and shadow—from sunny open parks to grimy underpasses. It doesn’t get more real than that.