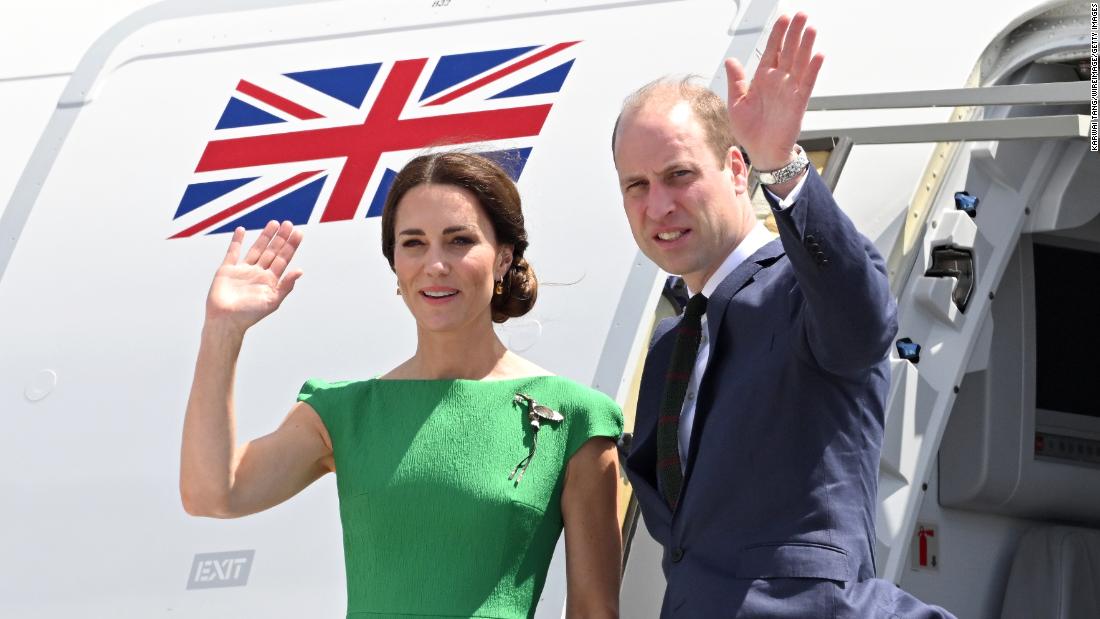 That will not be the case this time. There has been a steady stream of negative headlines coming from the Duke and Duchess of Cambridge’s visit to the Caribbean and they drowned out the more positive coverage that was undoubtedly there, too.

It’s not that William and Kate did anything different this time round. Their trip still had all the hallmarks of a traditional royal visit: dancing, sporting events with a national hero, glamorous dinners and speeches. But what does appear to have changed is the tone around these trips, and they may need to adapt to that if the “triumphant” tour headlines are to return.

CNN was not on this tour, but we have traveled extensively with the family. There are always republican and anti-monarchy demonstrations, which the royals do not generally have a problem with, in our experience.

The family believe in self-determination, so if a country wants to replace the Queen with its own elected president as head of state then they will support that, as demonstrated by Prince Charles, who attended and endorsed the swearing-in of the new President of Barbados last year.

But over the past couple of years, those demonstrations have shifted. They are still about breaking ties with the monarchy, but it’s not just about independence and the future. It’s also about coming to terms with the past, and in many Commonwealth realms, that’s about the slave trade and Britain’s role in it. Many in these former British colonies also want an apology and reparations.

The royal family’s links to slavery date back to the 16th century. Queen Elizabeth I provided slave merchant John Hawkins with her own vessel “specifically for the purpose of capturing Africans on the West African coast,” according to an article in the UK’s national archives. Subsequent members of the royal family invested heavily in the slave trade. Many of the grand stately homes in Britain today were built on the profits of slavery and colonial exploitation.

The duke addressed the topic, discussing Britain’s historical role in slavery in his only speech during the couple’s stop in Jamaica, denouncing the “abhorrent” practice and expressing his “profound sorrow.”

For many, that will not have been enough. A formal apology and acceptance of responsibility would open the door to questions about financial restitution. That is the domain of the UK government rather than the royals. When it comes to matters of state, members of the royal family act on the advice of the ministers, so an apology or reparations would need to be agreed with the government first.

Earlier in the day, in what appeared to be a tense meeting, Jamaican Prime Minister Andrew Holness suggested the couple’s trip to Jamaica could be the last with a British monarch as head of state, telling them the country was “moving on” and will attain its “true ambition” to be “independent.”

To critics, royal tours are jollies for an outdated British monarchy, but they are hard work for everyone involved and the reality is that they only happen at the request of the host country, which goes through the British government. It’s about promoting Brand UK and reinforcing international relationships. And the royals are regarded by the British Foreign Office as the ultimate promotional tool and major national asset.

American-British playwright, author and columnist Bonnie Greer said the royal tour model is “pretty archaic” and needs to be addressed “immediately.” She suggested a way to modernize them would be to have organizers ask a potential host country “to find a way to ask the people if they’d like a tour, and to feed back to the Royal Family.”

However, there are others who believe tours are a relic of the past and should be done away with altogether. Naomi Evans, co-founder of the Everyday Racism project, told us she finds them “problematic” and the world has outgrown them.

“There has been such an awakening of how racism, capitalism, colonialism, enslavement of people, has impacted our everyday lives and people are starting to see how problematic two people who have directly benefited from colonialism and the Empire, walking around, smiling and laughing , how that actually is not adding anything to these countries, “she says.

“There’s absolutely no need for them. What do they represent? What is the message that you’re saying when you’re sending people who have colonized, stolen from other countries, and you’re sending representatives over there? For what? I do not understand what the purpose is of them unless it’s to go and apologize, and to start talking about how you repair the damage. “

Meanwhile, British anti-monarchy campaign group Republic labeled the Caribbean tour a “turning point” and described the visit as having been “poorly advised and poorly executed.”

“There has been a marked shift in attitudes towards the royals in the UK and across the Commonwealth over the past decade,” Graham Smith, the group’s CEO, said in a statement. “The BLM (Black Lives Matter) and anti-slavery movements in particular have helped shift the tide away from the monarchy and towards more independent and egalitarian ideas.”

The Cambridges are ending the week with a last stop in the Bahamas, where they will be hoping to refocus the tour back to the organizations and individuals they support and want to promote.

There will be palace debriefs as there are always after these outings and they will take lessons from this experience and adapt, because that’s how the monarchy has survived as long as it has. The key question is whether the current format of royal tours is still the most effective way of promoting Britain and strengthening ties with its former colonies.

WHAT ELSE IS HAPPENING?

Queen Elizabeth II was positively beaming during her latest engagement. She was pictured smiling broadly as she viewed a display of hand-decorated teapots and antique enameled trinket boxes brought to Windsor Castle on Wednesday. Clutching her walking stick, the monarch inspected luxury items from British craftwork company Halcyon Days in the castle’s White Drawing Room to commemorate the firm’s 70th anniversary. The presentation included pieces featuring some of its earliest designs from the 1950s, as well as current collections including English fine bone china. Halcyon Days is one of just 14 companies in the world to hold all three prized royal warrants. The sovereign also watched a demonstration of traditional enamel decoration and gilding by hand by master artisans.

A young Queen Elizabeth II is to grace the cover of British Vogue for the first time as the magazine marks the monarch’s Platinum Jubilee with a special tribute issue. “British Vogue pays special tribute to Her Majesty The Queen by looking back on her own unique relationship with the Monarch during her seventy years on the throne,” it said in a press release. It’s the first time the Queen has appeared on the front cover in photographic form as previous issues celebrating the monarch used illustrations. The photograph selected for the April cover is a black and white shot taken by British photographer Antony Armstrong Jones, who died in 2017. He was married to the Queen’s sister, Princess Margaret, between 1960 and 1978. The issue goes on sale on March 29 , with a separate cover featuring “The Queen’s Gambit” actress Anya Taylor-Joy.

Buckingham Palace has shared some details about the special Thanksgiving service celebrating the life of the Duke of Edinburgh, which is set to take place at Westminster Abbey on Tuesday.

The memorial event will pay tribute to Prince Philip’s “dedication to family, Nation and Commonwealth and recognize the importance of his legacy in creating opportunities for young people, promoting environmental stewardship and conservation, and supporting the Armed Forces,” the palace said in a statement .

The statement also revealed that particular attention will be paid to honor the duke’s lifelong contribution to public service, his devoted work with 700 organizations and the legacy of the Duke of Edinburgh Award program.

Of course, royal family members will be in attendance, but the palace said we can also expect members of foreign royal families, as well as Philip’s wider family, friends and household staff to be among the guests at the service. There will also be a showing of more than 500 representatives from the duke’s former charities and patronages.

Others in the congregation will include representatives from the British government, the armed forces and the devolved UK administrations, in addition to high commissioners and overseas territory representatives.

Music will be provided by Westminster Abbey and Chapel Royal choirs during the service, with the Band of the Royal Marines playing before and after the event.

PHOTO OF THE WEEK

William and Kate weren’t the only royals on tour this week to mark the Queen’s 70 years on the throne. Prince Charles and his wife, Camilla, popped over to Northern Ireland for a two-day visit. Huge crowds turned out in Cookstown to get a glimpse of the royals. While there, they had a go on a tandem bicycle while meeting volunteers at the Superstars cafe, a center that provides employment opportunities and helps train young people with learning difficulties. They then traveled across the border to the Republic of Ireland to visit Waterford, Ireland’s oldest city, meeting groups that work to promote food sustainability and tackle climate change through farming.

“We are forever grateful for the immense contribution that this generation and their descendants have made to British life, which continues to enrich and improve our society.”

While speaking in Jamaica, the duke also paid tribute to the Windrush generation, who came to the United Kingdom from the Caribbean to help rebuild the nation after World War II. The British government’s treatment of these people and their descendants sparked a scandal in 2018, when it emerged they had been subjected to harsh immigration crackdowns.