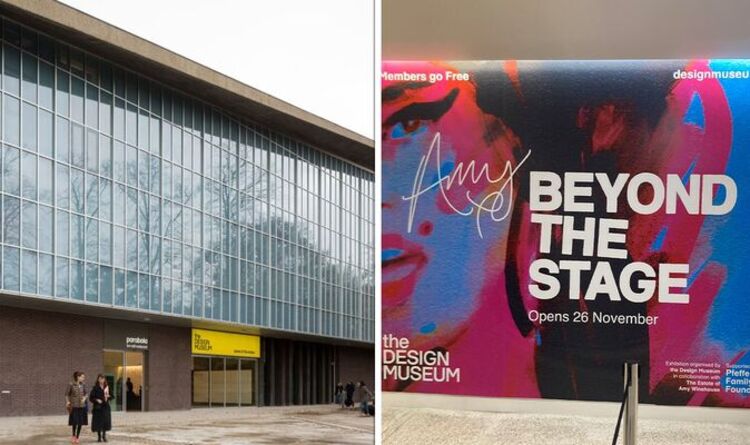 Based in Kensington, London, the Design Museum is easily accessible to visitors by bus or tube. The nearest Underground station is Kensington High Street, which is only a five to ten minute walk from the museum. Since November of last year, the Design Museum has been host to Amy: Beyond the Stage, an incredibly moving collection of the Rehab star’s personal objects, writings and fashion which paint a vivid picture of the British icon.

I arrived promptly at the museum, which is one of the world’s leading institutions dedicated to design in every way of life, for a tour of the exhibit.

Our guide was the collection’s curator, Priya Khanchandani, who passionately explained why Amy, with her signature beehive and sixties fashion homages, made the perfect muse for such an exhibition.

The first part of Amy: Beyond the Stage is dedicated to the Back to Black songstress’ early life in Southgate and dreams of becoming a star.

Diary entries are sprawled across the museum’s wall, each showcasing her crackling wit and poignant musings, painting a picture of the woman she would one day become.

Many of the personal items, including Winehouse’s diary entries and fashion items, come from her parents who donated much of the collection’s most fascinating pariphanilia.

READ MORE: Council tax reductions explained: Who is eligible to pay less and how to claim

One of the most touching parts of the experience was seeing a Camden street sign graffiti with condolences from fans. Winhouse moved to the area after leaving her family home in Southgate.

Early performance and archive footage of Amy performing for record label executives are included in this part of the exhibition as a stepping stone to the illustrious career.

Following parts of the exhibit chronicle the release of the only two studio albums she released in her lifetime, Frank and Back to Black.

While her first album paid homage to her jazz idol Frank Sinatra, as well as her frank style of humor and perspective, her renowned sophomore effort saw Amy adopt the sounds of Motown girl groups.

Handwritten lyrics from both these distinct areas are woven into the collection’s overall tapestry, while past performances of Amy performing hits like Stronger than Me and Tears Dry on their Own play in the background.

In terms of interactive experiences, my group was able to enjoy a short film detailing Winehouse’s career in a reconstruction of London’s Metropolis Studios, where she recorded some of her work.

We were able to watch previous performances intercut with interviews in a recreation of the studio experience, with the viewers wearing producers behind the booth watching Amy perform for us in a studio setting.

But the highlight of the whole exhibition was an immersive concert experience in a dark room separate to the main collection.

Once we walked in, we were treated to a performance of Amy’s at the Shepherd’s Bush Empire in 2017. Singing Tears Dry on their Own, the semi-circular room was turned into an animated, dreamlike interpretation of Winehouse at her very best.

While much of the collection is tinged with melancholy, it is a must-see for any Amy fan or music lover as it showcases the songstress the way she should be remembered: an icon.

For those who are looking for the perfect place to stay when coming to London for the exhibition, look no further than the ibis London City – Shoreditch. Situated in the beating heart of London’s increasingly popular West End, the hotel is the ideal choice for those wanting to see every nook and cranny of the UK’s capital. Amy fans will be pleased to hear that the Design Museum is only a 35 minute ride on the District Line from this particular ibis hotel.

Check-in is from 3pm on the day of arrival until 12pm on the last day of the visit. It is located near signature East End tourist spots such as Spitalfields Market and Brick Lane, but is also a short walk to Tower Bridge and the city’s financial district. After leaving the Design Museum, I arrived at the ibis London City – Shoreditch at around 6pm and was welcomed warmly by the check-in staff.

I was able to head to my room relatively quickly, and all of the hotel’s employees were very careful in keeping with Covid restrictions by wearing face masks and by social distancing whenever possible. The meticulously cleaned room included a large double-sized bed with ensuite bathroom and power shower. As well as this, the room had a massive flat screen television and business desk, which had a USB charging hub.

Furthermore, there were coffee and tea making facilities which were readily available for anyone staying at the ibis. Before calling it a night, I enjoyed a tasty and affordable pizza at the hotel’s restaurant bar, as well as enjoying a cheeky cocktail.