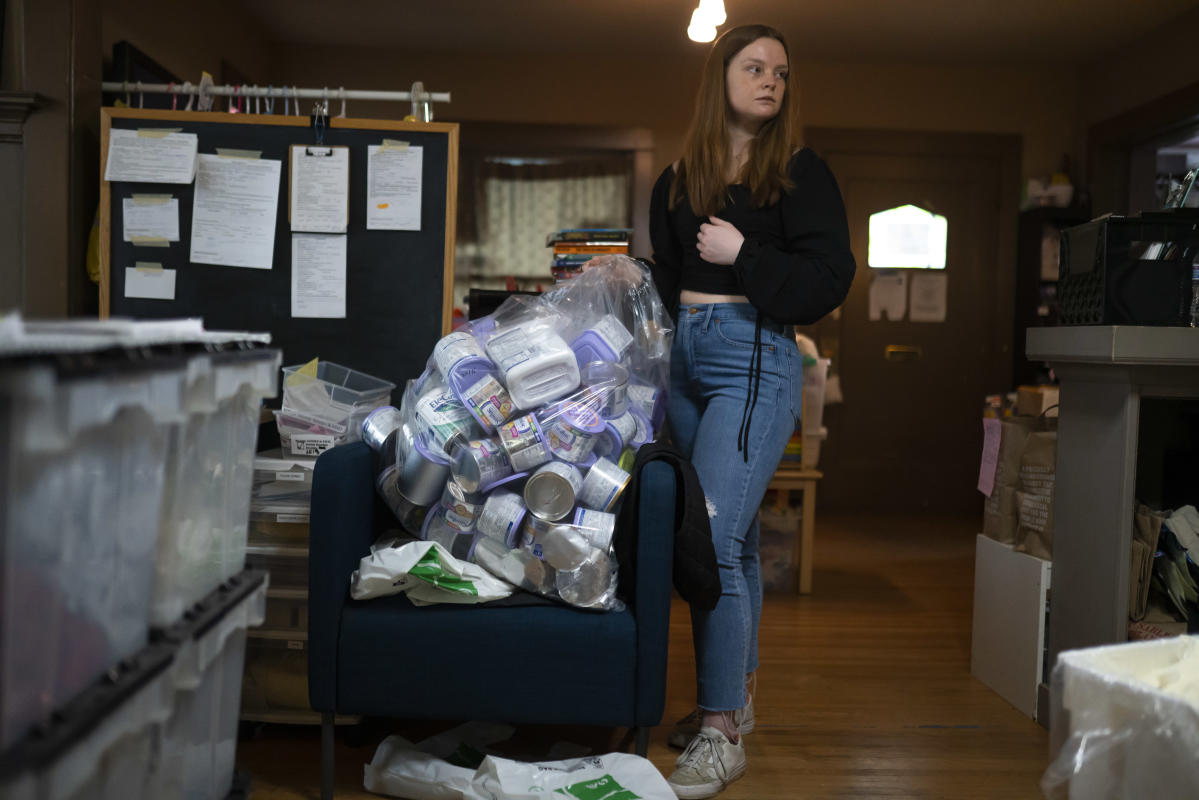 A baby formula shortage gripping the US since March has parents in a panic over where and when they’ll be able to find the products they need to feed their kids.

The out-of-stock rate, representing the amount of formula that’s not in stock compared to what’s typically available, was 43% for the week ending May 8, according to Datasembly, a provider of real-time product data for retailers and consumer packaged goods (CPG) brands.

With no easy end in sight, caregivers nationwide have been forced to devote their free time to driving between stores in search of formula, prompting retailers to limit the number of cans customers can buy. Others have turned to Facebook groups and informal support networks to acquire the nutritional products that work best for their kids.

“I’ve looked online, I have my mom in Boston looking, my mother-in-law in Florida looking,” Elyssa Schmier previously told Fortune about her trouble finding formula for her 8-month-old son. “Everyone we know is looking for us and no one can find it.”

How did a baby formula crisis spring up in one of the world’s richest countries? Experts say a recall by one of the industry’s largest manufacturers, persistent supply-chain issues, and a market dominated by only a few players have combined to form what one consumer goods expert calls an “perfect storm” affecting the supply of essential formula to millions of babies across the US And the shortage could last for months.

Here’s how we got here.

Abbott Nutrition is the food sector arm of medical device and health care giant Abbott Laboratories, making products that range from carb-loaded drinks that help patients rebound from surgery, to energy drinks, to powder and liquid baby formula. Though it maintains a global manufacturing network, its plant in Sturgis, Mich., Is among the few in the US that produce formula.

On Feb. 17, Abbott voluntarily recalled its Sturgis-manufactured products and shut down the plant following reports that four infants fell ill from bacterial infection and two died after consuming formula produced in the plant. A whistleblower report, submitted to the FDA in October 2021, alleged further health and safety compliance issues at the facility and contributed to a formal inspection by the agency earlier this year.

Abbott is now waiting for approval to reopen. “We understand the situation is urgent — getting Sturgis up and running will help alleviate this shortage,” the company said in a statement to Fortune. After conducting its own investigation, which included genomic sequencing of bacteria, the company reported that nothing on its premises matched the specific strain of bacteria that caused the illnesses and deaths.

“The Cronobacter sakazakii that was found in environmental testing during the investigation was in non-product contact areas of the facility and has not been linked to any known infant illness, ”the company said in a statement.

The FDA, however, found more problems with the facility that extended beyond the possibility of previous contamination. Following its own inspection, which occurred from Jan. 31 to March 18, the FDA says that it observed Cronobacter sakazakii “In medium and high care areas of powdered infant formula production” —a problem regardless of whether or not it was the same strain that caused the specific infant deaths.

The agency additionally said in its report that the company “did not ensure that all surfaces that contacted infant formula were maintained to protect infant formula from being contaminated by any source.” According to the FDA, the company is still working to “correct findings” from its inspection. The plant has not yet been able to reopen as a result.

Abbott will not be able to get product from its Sturgis facility on shelves for another six to eight weeks, according to the company. And that’s only if it reopens as soon as possible.

Even after the plant reopens and begins to provide formula to families again, a larger question remains: How can closing a single manufacturing facility have such a drastic effect on millions of babies’ access to nutrition?

A monopoly in the market

The baby formula market exists as a shared monopoly, with only a few manufacturers controlling nearly all supply.

Abbott had an approximately 43% market share a decade ago, according to a USDA report from 2011 – the most recent number available. Little has changed since then. The company still maintains exclusive provider contracts in many states with WIC, the USDA’s supplemental nutrition program for low-income families, which makes up nearly half of formula sales nationwide. A few other manufacturers, including Mead-Johnson and Nestlé, also have WIC contracts and control the rest of the market.

In addition to its highly concentrated structure, the baby formula market is difficult for another reason. Its demand is set by the nation’s birth rate, and the market has been shrinking for years. The number of births has declined every year since 2008, except for 2014, according to the US Census Bureau.

With only a few key players whose capacities are tied to a shrinking market, repercussions are inevitable when anything gets in the way of a certain product getting to store shelves. Other manufacturers are bound to struggle with an influx of new demand from consumers who can not get what they’d typically buy.

“The dilemma [manufacturers] have is that it’s not a very lucrative market, ”says Patrick Penfield, a professor of supply chain management at Syracuse University. “The only way you can grow your market share is if you’re aggressively going after competition.”

Because Abbott is one of the biggest players in the game already, significantly expanding its share is not really an option.

“If you can not grow your market share, then you look at how you can reduce costs,” says Penfield. “And sometimes when you reduce the costs, you may not have the right protocols or procedures in place to make sure you’re doing things properly.”

“I’m not saying that’s what Abbott Laboratories did,” he cautions. “But that would be an assumption of mine.”

Is the FDA responsible for the shortage?

Abbott is not the only entity possibly at fault. “There’s plenty of blame to go around here,” says Scott Faber, a professor at Georgetown University’s law center and vice president of government affairs at Environmental Working Group, a nonprofit aimed at empowering consumers.

Faber sees the FDA itself as partly responsible for the shortage. The agency, he says, did not react fast enough to the whistleblower report and should have conducted a plant inspection sooner.

“When a drunk driver causes a car crash, the drunk driver bears much of the blame, but so does the bartender who looked the other way while serving one too many drinks,” he says.

When submitting the report for the record last month, Rep. Rosa DeLauro (D-Conn.) Wrote: “I am equally concerned that the FDA reacted far too slowly to this report. The report was submitted to the FDA on Oct. 20, 2021. The FDA did not interview the whistleblower until late December 2021. According to news reports, the FDA did not inspect the plant in person until Jan. 31, 2022, and the recall was not issued until Feb. 17, 2022. ”

The agency did not finish its inspection and issue observations to Abbott until March 18. The company says it has been working since then to update its education and training protocols as well as its cleaning and maintenance procedures. “The FDA would not have shut down that factory if they did not find anything. So there’s definitely some type of noncompliance that’s going on, ”Penfield says.

Now the FDA is working to catch up to a crisis that seems to have been unfolding in slow motion for months.

“The FDA recognizes that many consumers have been unable to access infant formula and critical medical foods they are accustomed to using and are frustrated by their inability to do so,” the agency said in a statement to Fortune. “The agency is doing everything in its power to ensure there is adequate product available where and when they need it.”

The future of formula

This week, the White House held a press conference to address the shortage and how it plans to get formula restocked as quickly as possible without compromising safety.

“Those steps include first cutting red tape to get more infant formula to the shelves by urging states to provide flexibility in the WIC program, which can be a key driver of some supply disruptions,” said a senior administration official. The official added that the administration is calling on the FTC and state attorneys general to monitor price gouging by third-party sellers.

The official outlined a third avenue for alleviating the shortage: foreign imports. “The US normally produces 98% percent of the infant formula it consumes, and trading partners in Mexico, Chile, Ireland, and the Netherlands are key sources of imports,” said the administration in a release that accompanied the press conference.

However, there’s no timeline yet for when those formula imports will arrive in the US and be distributed. Friday, FDA Commissioner Robert Califf tweeted that the agency will announce its plan next week.

When pressed about how long the shortage will last, the official said there is no estimate for when Abbott’s facility will resume functioning.

Fortune would like to hear about your experiences navigating the baby formula shortage. You can email the reporter of this article at colin.lodewick@fortune.com.

This story was originally featured on Fortune.com