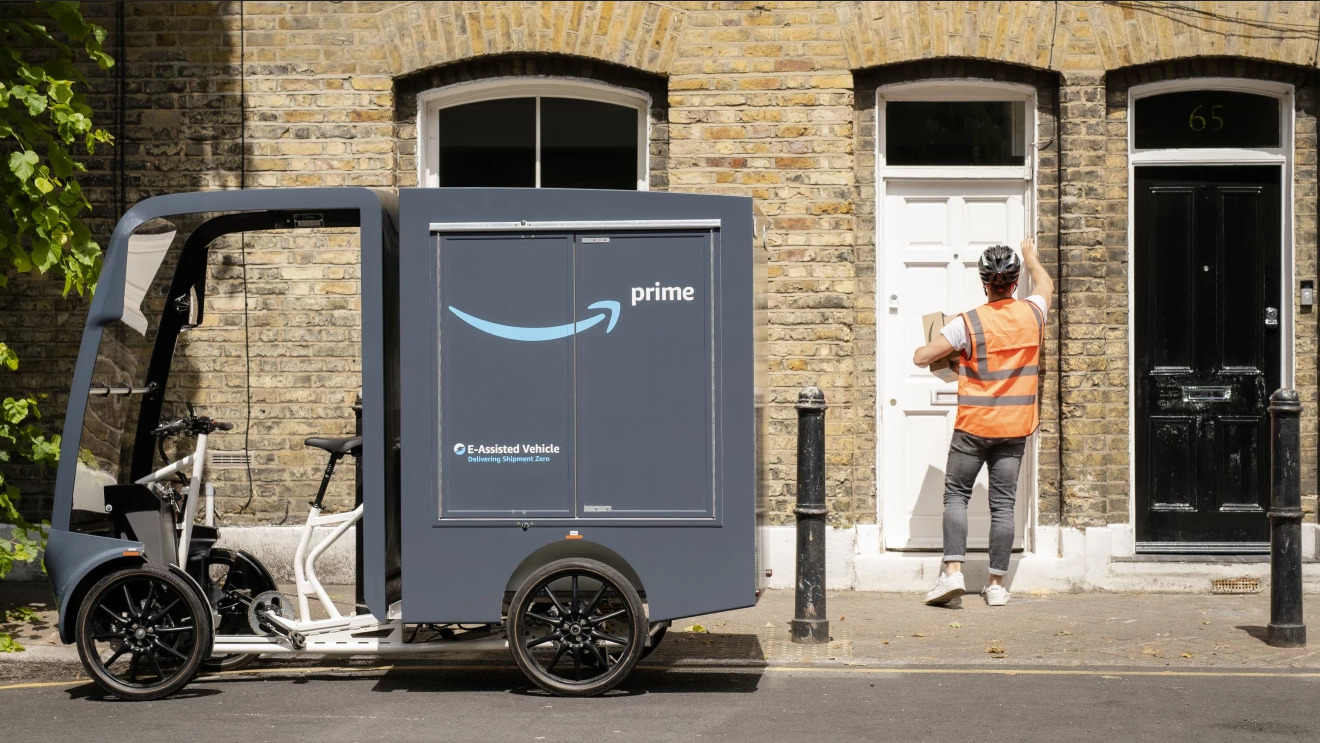 Amazon is planning to swap lorries for bicycles with the opening of a micro mobility hub in Hackney that will support around a million deliveries a year to the local area.

The aim is to replace traditional van delivery with a fleet of cargo bikes and on-foot deliveries by staff. Working with the London Borough of Hackney, Amazon says it expects to make more than one million customer deliveries from the new warehouse every year.

Apart from reducing local pollution by swapping road vehicles for cargo bikes, Amazon will be reducing road congestion but is also avoiding paying congestion charges that apply to road vehicles. That cost saving is likely to be offset by higher costs from hiring more staff to ride the smaller capacity bikes and do the on-foot deliveries.

Amazon says that its fleet of zero-emission vehicles will expand further as more e-cargo delivery hubs are expected to launch across the UK in the coming months.

Cllr Mete Coban, Hackney Council Cabinet Member for Environment and Transport, said: “Tackling transport emissions is key if we’re to reach net zero. We’re really pleased to have worked with Amazon to support them to take traditional vans off the streets and replace them with e-cargo bikes. This will help reduce emissions and improve air quality for people in Hackney and beyond. ”

The use of local delivery hubs is growing in popularity, with larger vans delivering to a single point, and then a fleet of smaller electric vans and cargo bikes handling the last-mile delivery to the end customer.

Better Bankside has recently set up such a scheme offering storage space in a railway arch, while the ongoing Vision for Soho is looking at the possibility of using a local car park as a delivery hub in off-peak hours. The City of London is exploring similar ideas at Finsbury Square and London Wall.

Hackney is also already supporting a cargo bike hire scheme for individuals and small firms, with a trial supplied by Beryl that opened last year, and Wandsworth is also about to launch a similar scheme.

There’s also the rise of local lockers for deliveries that are in effect a microdelivery hub, albeit it one where the customer goes to the hub to collect the parcels, but it still has the effect of reducing the need for a van to drive around side streets dropping off plots to each house in turn.

This website has been running now for over a decade, and while advertising revenue contributes to funding the website, it does not cover the costs. That is why I have set up a facility with DonorBox where you can contribute to the costs of the website and time invested in writing and research for the news articles.

It’s very similar to the way The Guardian and many smaller websites are now seeking to generate an income in the face of rising costs and declining advertising.

Whether it’s a one-off donation or a regular donor, every additional support goes a long way to covering the running costs of this website, and keeping you regularly topped up doses of Londony news and facts.