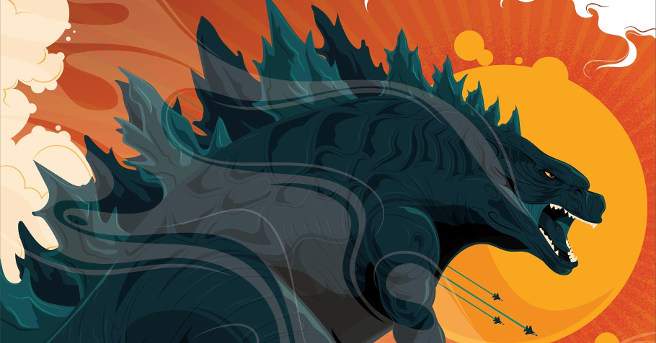 For years, Awesome Art We’ve Found Around The Net has only been about two things – amazing art and the artists who create it. With that in mind, we thought, why not take the first week of the month to showcase these amazing artists even more? Welcome to “Amazing Artist We Have Found Around The Web.” In this column, we focus on one artist and the amazing art they create, whether they are amateurs, upcoming or well-established. The goal is to uncover these artists so that even more people become familiar with them. We ask these artists a few questions to see their origins, influences and more. If you are an amazing artist or know someone who should be introduced, feel free to contact me at any time [email protected]. This month we are very happy to bring you the amazing art of …

Mike Mahle is a designer and illustrator based in central Illinois. He is known for his vector illustration, bright color palettes and creative layouts. Mike has had the pleasure of creating work for clients such as Disney, Sci-Fi Now Magazine, Sony Pictures and many more. His work has been recognized by ImagineFX, Pulp and Cult, Printed in Blood and UCDA. Mike has self-published three books on his art and design, Prime, Empire City, and Square.

When Mike is not working with clients, he can be found by creating for himself. Either by putting together his next art book or working on something that he has a burning desire to produce.

JOBLO: What got you started as an artist?
MAHLE: Superheroes. The earliest drawings I can remember making were of the Super Friends. Always loved recreating my favorite heroes, cartoons or movies. I knew early on that I wanted to do something that was based on creativity. In high school, I explored various options before deciding on design as the creative profession that I wanted to pursue. Fast forward a bit and I now have my bachelor’s degree in graphic design and have been a professional designer / illustrator for over 20 years.

It took a while to find a particular style that I wanted to work in. The more I got through my design education and career, the less I focused on illustration, and the more on design. At one point, I realized that I had completely stopped making any actual kind of illustration and jumped back with digital illustration. I experimented with a lot of different tools, but always had a hard time getting the type of look I wanted. I was after a very clean style that I just could not achieve by working with pen, paper and Photoshop.

That was when I started experimenting with vector art. As a designer, I was well versed in Adobe Illustrator, so it did not take me long to start loving the way things looked in vector. Letters were also a huge piece in the puzzle that I wanted to include in my work, for which vector is made. To bridge between traditional illustration and design, I wanted my illustration to look more like graphic illustration, if that makes sense.

I’ve been working in my current style for almost ten years now, but I still do not think I’ve quite achieved the exact result I’m looking for. That is, with any kind of consistent.

Who were some of your favorite artists when you were growing up?
When I was a superhero fan, since I was old enough to know what one was and I loved to draw, it only made sense that I would go to comics, the home of superheroes. Tumbling over these comic book sites from artists like John Byrne, John Buscema, Jim Lee, J. Scott Campbell and Todd McFarlane just inspired me.

Classic Disney animation also had a huge impact on me. The original hand-drawn animation from movies like Peter Pan, Lady and the Tramp, Bambi, and all the others had such a pulse and life that it was hard to understand that they were drawn by hand. There were some incredible talents on display in the early films. I love how Disney changed the animation style with almost every movie. It gave each film so much personality.

I think you can see the two specific influences on my work. I’ve never tried to hide that. I have always felt that it is important, at least for me, to carry these influences on my sleeve and in the arts. Let them shine through so to speak.

Who are you really digging these days, follow on Instagram?
I keep my Instagram feed almost exclusively dedicated to art and artists as much as I can. One of the positive aspects of social media is seeing such a puff of artists from all over the world with so many different voices. Brandon Ragnar has always had a great impact on my work. I also love what Tom Whalen do. These two artists have more than anyone else achieved the kind of graphic illustrations that I am constantly striving for.

Triston Eaton, Orlando Arocena, Erik Tan, and Phantom City Creative are some other artists that I would say are also at the top of my list.

I am represented by Poster Posse, and the wealth of creative that lies in their list of artists is impressive. I always get inspired when the other artists reveal what they have been working on. It’s also nice to have so many other artists that I can contact with questions and / or advise. I feel that artists are always better than other artists. It inspires you and pushes you to your game.

What advice would you give to budding artists today?
Get your job out there. Art is meant to be enjoyed, so let others see it. It will only make you grow as an artist, even if the first reaction is not what you want.

For a long time, I was resistant to showing my work to a wider audience. I just did not have much confidence in my work at that time. I wish I had gotten my work out in nature earlier than I did. I grew significantly as an artist when I did.

What should we look for from you in the future?
I’ve made three books that contain my illustration work, and I’m just starting to plan my fourth. This will be more of a concept book with a little narrative than it will take you through the book filled with works of art centered around a particular story. The story of an old, haunted mansion and the grounds around it.

I’m also finishing a tribute series to Ian Fleming’s classic 007 novels. I gave myself the task of creating a complete book jacket design for each of the books in the series. I’ve made it through Goldfinger so far.

Recently, I partnered with Sideshow Collectibles to create artwork for some skate decks, artist print series, and some officially licensed works for everyone’s favorite superhero IP.

As a fansite we have to ask you … What are some of your favorite movies / TV series of all time?
That’s a great list.

I’m a kid of the 80s, so Lucas and Spielberg are my movie gods. The original Star Wars trilogy and Raider of the Lost Ark remain two of my all-time favorites. LOST stands as my favorite TV show along with Batman the Animated Series.

I’m also a James Bond nut, and the movie series is one of my favorite series. Craig’s era was unique. It’s going to be hard to follow, but I can not wait to see what they do with it.

Lately, I’ve been swept up, like everyone else, in Marvel’s Cinematic Universe. The pairing of what they have been able to do is so much fun. The Captain America movies and Wanda Vision are two of my favorites.

As much as I love the MCU, Zach Snyder’s Justice League blew my hair back a bit. I love big sweeping epics and I felt like that was just what we got. Count me in the camp who thinks it’s a crime if they do not build on what they have there.

Besides the superhero genre, David Fincher and Paul Thomas Anderson are always interesting filmmakers that I am attracted to. Another would be Denis Villeneuve. His catalog of films from the last 8-10 years is remarkable. Arrival and Sicario really stand out to me.

Godzilla: King of the Monsters