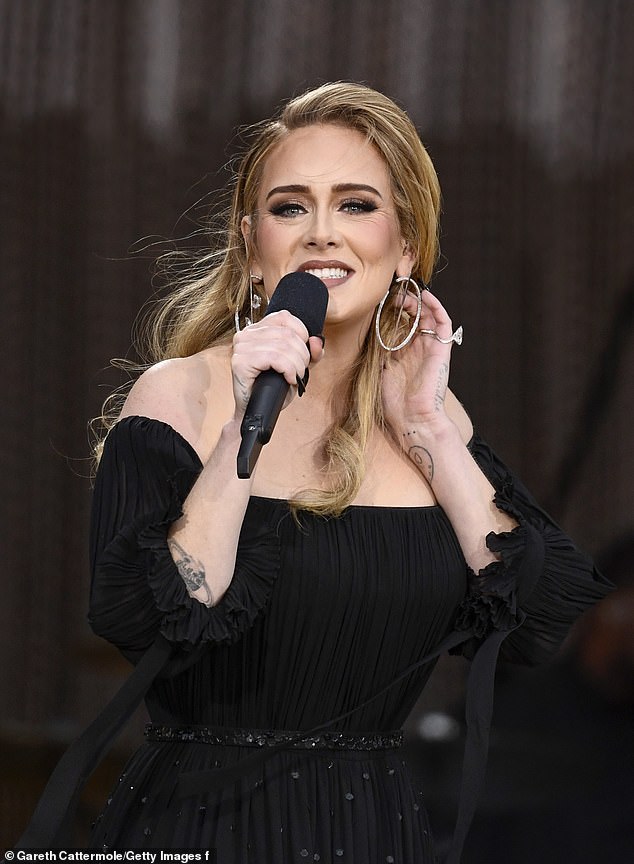 Adele has revealed that years of living like ‘such a recluse’ fueled interest in her life and her intense fame.

The 34-year-old musician believes that by keeping out of the spotlight in between album launches and press tours or concerts, she fed media and general interest in her life.

But she says her boyfriend Rich Paul, who she is believed to have been dating for around a year, a stopped her from just ‘hanging out at home’, encouraging her to ‘go to that birthday party or try the food at that new restaurant ‘.

Speaking on BBC’s Desert Island Discs on Radio 4 today: ‘Fame (is) intense and incredible. I’ve fueled it by being such a recluse, sometimes, it used to be two years and I would not be seen … anywhere. I was hanging out at home. ‘

Adele, pictured here with her boyfriend Rich Paul, says she would like to have a couple more children if she can, but if not she has her nine-year-old son Angelo

However now she says she has a ‘whole set up of how [she] moves and no one ever knows, just so she can go out and be completely care free ‘.

The Grammy and Oscar winner also spoke about how she’s still good friends with her ex, Simon Konecki, and father of her son Angelo, nine.

‘It was never tricky between us,’ she said. ‘We’re such good friends and over my dead body was my kid having a messy divorce in his life.

‘There are no issues, and there were no issues, so that made it easier. I was blessed with him, you know, he’s the best, and I definitely approached it all with grace and it all paid off. ‘

Talking about the future, Adele said: ‘I’d definitely like a couple of more kids, it’d be wonderful, if we can, if not I’ve got Angelo. And I just want to be happy. ‘

But unhappiness was ultimately what fueled her seven stone weight loss and how she turned to exercise to comfort her mental troubles.

She explained: ‘I understand why they are fascinated [by my weight loss)]because I did not share my journey like everyone else. Most people would have a DVD out by now, and I did it on the quiet for myself. ‘

However she added that she felt terrible for some of her body-conscious younger fans who thought she had betrayed them by losing weight.

‘I felt terrible for some people that felt other people’s comments meant they were not looking good or they were not beautiful,’ Adele said.

‘I felt terrible, some of the ones I saw were young, they were like 15. There were some other people that felt very betrayed by me, like, “oh, she is giving into the pressure of it’, which did not really bother me.

‘Because, like, you ain’t holding my hand at night at 4am when I’m crying my heart out with anxiety and needing a distraction and stuff like that.

Adele’s father Mark Evans in 2019, working as a delivery driver for a courier firm in South Wales

Adele also talked about how she thinks she’s a generally sad person.

‘One of the first songs … never like a full blown song or anything, it was called this is my life, I really do believe I channel something from somewhere else, I’m a sad person, and I do not always know why, but it was deep.

‘I was talking about being in pain, My Grampy died when I was 10 and I was really traumatised by that so maybe it was from that and I hadn’t figured it out at the time.’

The London-born singer also confirmed she made peace with her father before he died.

Even though she decided to stop seeing him when she was aged 13, saying she made the decision because he kept letting her down, she saw him briefly when she was 15 but not again for many years.

The star was reportedly unhappy with the staging, which involved her singing the songs in a mocked-up swimming pool. But her decision infuriated fans, many of whom had forked out thousands to travel long distances to the gigs

‘When I found out he was ill, a few years ago, I got the call and I drove straight there,’ she said. ‘It was hard but it was definitely one of the biggest moments in my life in a good way.

‘I made my peace with him when I found out he was sick. And we really got on, which was amazing but also really sad, he was really bloody funny, I do not remember that from when I was little. But it was really nice, we laughed, and we gossiped and we cried, it was great for both of us. ‘

Adele also revealed how the ‘brutal’ of backlash prompted by the cancellation of her Las Vegas residency in January left her feeling like a ‘shell of a person’.

She describes dealing with the fallout from the decision to ditch three months of performances as being akin to ‘grieving’.

‘The reaction was brutal, brutal. I was a shell of a person for a couple of months. I just had to wait it out and just grieve it, I guess – just grieve the shows and get over the guilt. But it was brutal. ‘

The London-born singer, best known for hits such as Rolling In The Deep, Skyfall, Hello and Easy On Me, pulled the plug on the shows at Caesars Palace on January 20 – 24 hours before they were due to begin.

The star was reportedly unhappy with the staging, which involved her singing the songs in a mocked-up swimming pool. But her decision infuriated fans, many of whom had forked out thousands to travel long distances to the gigs.

A defiant Adele – who performed over the past two nights in London’s Hyde Park – says the decision to cancel the shows was not an easy one, but on balance she thought it had been the right thing to do.

She adds: ‘I definitely felt everyone’s disappointment and I was devastated, and I was frightened about letting them down and I thought I could pull it together and make it work and I couldn’t – and I stand by that decision.

The tracks Adele chose as her Desert Island Discs were B52’s Rome, which her mother used to always play, and Gabrielle’s Dreams, which she says reminds of her childhood.

She also picked Shola Ama’s You Might Need Somebody, Nina Simone’s He Needs Me, and Etta James’ I’d Rather Go Blind, all because of their soulful or haunting voices.

Also making her list were Donna Hathaway’s For All We Know, and what she calls the soundtrack of her life, Destiny’s Child’s Bills Bills Bills.

Adele appeared on Desert Island Discs on BBC Radio 4 today at 11.15am. The program will be repeated at 9am on Friday.