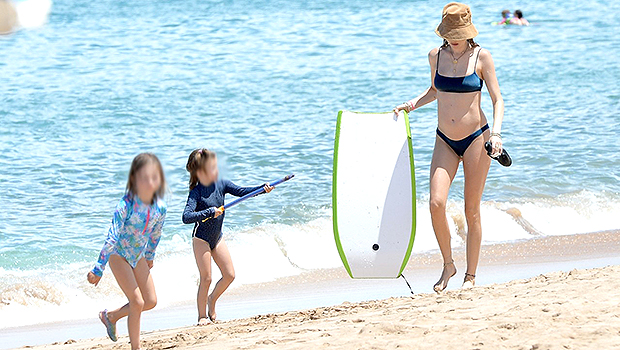 Adam Levine and his wife Behati Prinsloo spent a day at the beach with daughters Dusty Rose5, duck Gio Grace, 4! Behati, 34, stunned in a dark colored bikini with a sporty tank cut for the Maui outing on Thursday, Aug. 4. The supermodel kept her face protected with a beige bucket hat and sunglasses as she hung onto a boogie board while following her kids along the sand.

Behati appeared to have been in the water with her damp hair, which peeked out from the Y2K inspired hat. She kept the rest of her look simple with just layered gold necklaces. At one point, the doting mom appeared to be bending down and chatting with one of the girls, both of whom looked adorable in practical wetsuits! Dusty sported a blue floral one, while Gio went with classic navy blue.

Meanwhile, a shirtless Adam was also spotted emerging from the ocean rocking just a pair of blush pink swim trunks. The Maroon 5 singer, 43, showed off his bleached blonde hair and multiple tattoos as he soaked up the sun. His “California” tattoo could be clearly read as he walked straight towards the camera, representing his hometown and state of Los Angeles, CA.

Adam and the Namibian model have been married eight years, tying the knot at the Hotel El Ganzo in Los Cabos, Mexico in July 2014. The pair became parents just two years later in 2016 when they welcomed fist daughter Dusty, followed by Gio in 2018 Per previous interviews, it seems like the famous couple may also be interested in expanding their brood.

“I want a lot [of kids]I thrive in chaos,” Adam said in 2018. “[Behati] was an only child, so she wants like 100 babies. I don’t know if I can do that. That’s a lot of babies,” the rockstar joked, before revealing his take on being a first-time dad.

Why Adam Levine Left ‘The Voice’: Everything We Know About His Unexpected Exit

“I don’t know anything, but it’s kind of part of the beauty of it, honestly,” he added. “There are a lot of instincts, a lot of things that kind of kick in and switch on. It’s a beautiful experience.”