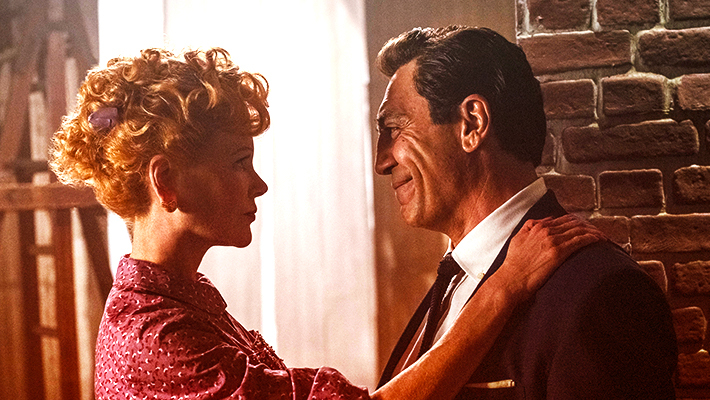 To the surprise of few, this year’s Oscar nominations have once again legitimized the biopic industry. There’s at least one biopic nominated in almost every category this year, led by Best Actress, in which biopics make up three of the five nominees – Jessica Chastain playing Tammy Faye Bakker, Nicole Kidman playing Lucille Ball, and Kristen Stewart playing Princess Diana. Even most pundits pick for the highest-profile snub, Lady Gaga in House Of Guccicame in a biopic of sorts.

At this point doling out awards to biopics and especially the actors in biopics feels like inertia as much as anything. When I watched King Richard, I had to pause the movie within the first five minutes to go look up some videos of the real Richard Williams, so convinced was I that Will Smith’s Foghorn Leghorn line reads could not possibly be an accurate portrayal of the real man (and based on what I found, they mostly aren’t). Thank goodness King Richard was released in the streaming era or else I would’ve had to wait the full two-hour-and-change run time to confirm this suspicion. Which would’ve been the most suspenseful thing about King Richard, otherwise mostly a movie about how Richard Williams, whose famous family executive produced the film, was a kooky guy who was right about everything all along.

This performance was nonetheless rewarded with a Best Actor nomination by the Academy, one of four nominations for King Richardalong with Best Original Screenplay and Best Picture. Being The Ricardos, meanwhile, Aaron Sorkin’s latest perfunctory biopic about Lucille Ball and Desi Arnaz, received three nominations, including Best Actor and Actress for Javier Bardem and Nicole Kidman, and Best Supporting Actor for JK Simmons. This just one year after Sorkin’s Trial Of The Chicago 7 received six nominations. Say what you will about the Aaron Sorkin biopic machine, it’s brutally efficient.

It’s not that biopics are never deserving of awards – Jessica Chastain’s work in The Eyes Of Tammy Faye for instance, a movie that was actually illuminating of its subject and actually had something to say, seemed more than worthy of her Best Actress nomination – it’s just that the biopic’s inherent prestige seems to outweigh any other considerations. Like, say, whether the film actually had anything to say about its subject other than that they were famous and important, as further illustrated by the fact that they were played by an actor who is also famous and important.

It’s hard to blame Will Smith himself here, who is neither a bad actor nor a dummy. Smith has been nominated twice before for Best Actor, both in biopics: in 2002 for Ali and in 2007 for The Pursuit Of Happyness. In the 15 years since, he appeared in just one other biopic, of sorts, playing Dr. Bennett Omalu in Concussion (“Tell the truth! Tell the truth.”), Which shockingly failed to garner a nomination. That’s a pretty good track record! Some might say a dull-ly predictable one.

The history of the acting categories is littered with winners from biopics that seem embarrassing in retrospect – Eddie Redmayne for playing an infantilized Stephen Hawking in Theory Of EverythingMeryl Streep for playing an addled Maggy Thatcher in The Iron LadyGary Oldman for playing a fusty Churchill in The Darkest Hour, Rami Malek for his wild-eyed Freddie Mercury in Bohemian Rhapsody. The list goes on. Would anyone now argue that those were the most memorable performances of their respective years?

Biopics now seem to exist somewhere outside of movies, belonging more to public relations; flashy advertisements for their stars and validations of their subjects’ legacies. Missing is the expectation that we’re actually going to gain any insight about their subjects. Chappelle’s Show skewered this concept all the way back in 2003 when Chappelle introduced his idea for Dave Chappelle, written by Dave Chappelle. “Antwone Fisher, ” Chappelle announced to his live audience. “It was directed by Denzel Washington, but, more noteworthy than that, it was written by Antwone Fisher. Which is pretty deep. I did not know you were allowed to write a movie about yourself. The temptation to lie would be too strong for me to do something like that. ”

It would be tempting to imagine that the general public has gotten more media savvy in the intervening 19 years, more able to distinguish art from marketing, but the history of the Oscars seems to suggest otherwise. In biopics of musicians, the commercial limitations are obvious: it’s pretty hard to make a serious movie about a music industry figure without the rights to that figure’s music, which generally requires the participation of the subject or their estate. (Without it, we might get something like Jackie Jormp-Jomp, 30 Rock‘s fictional sound-alike biopic of Janis Joplin starring Jenna Maroney). So it’s we’ve gotten decidedly un-illuminating, subject-friendly portrayals such as Bohemian Rhapsody spirit Rocketman.

Yet if anything the trend seems to be moving in the opposite direction, towards ever more indistinguishable boundaries between subject and filmmaker. First, we had the Jordan-sanctioned documentary about the 1990s Bulls, The Last Danceand then we had the Williams family-produced biopic King William, now legitimized further by the Academy. This month also saw the release of Home Teama sort-of biopic about former Saints coach Sean Payton (oddly structured as a Bad News Bears-style underdog sports comedy) that was co-written by Payton’s daughter’s boyfriend and produced by Adam Sandler, whose wife is that same boyfriend’s sister. Such is apparently what happens when you multiply the nepotism of Hollywood by the nepotism of the NFL. In retrospect, Will Smith’s biggest sin in Concussion might’ve been being critical of the latter.

Will there ever be an inflection point for this phenomenon? Perhaps there’s a reason for hope in this regard. Lionsgate recently announced that they would be teaming up with Academy Award-winning producer Graham King for Michaela biopic of Michael Jackson set to be produced by King and, naturally, the co-executors of the Michael Jackson estate, John Branca and John McClain.

It’s hard to imagine that co-executors of Michael Jackson’s estate could possibly allow a movie to be made that was honest about Michael Jackson’s history of molestation allegations, but it’s equally hard to imagine audiences being able to forget the damning allegations they heard in 2019’s Emmy -winning documentary Leaving Neverland. Yet will the Academy be able to ignore a movie set to be produced by the guy who made Bohemian Rhapsody (King), written by three-time Oscar nominee John Logan, and inevitably starring some talented performer in an Oscar-ready physical transformation? Assuming they can, the silence might speak louder than a trophy.