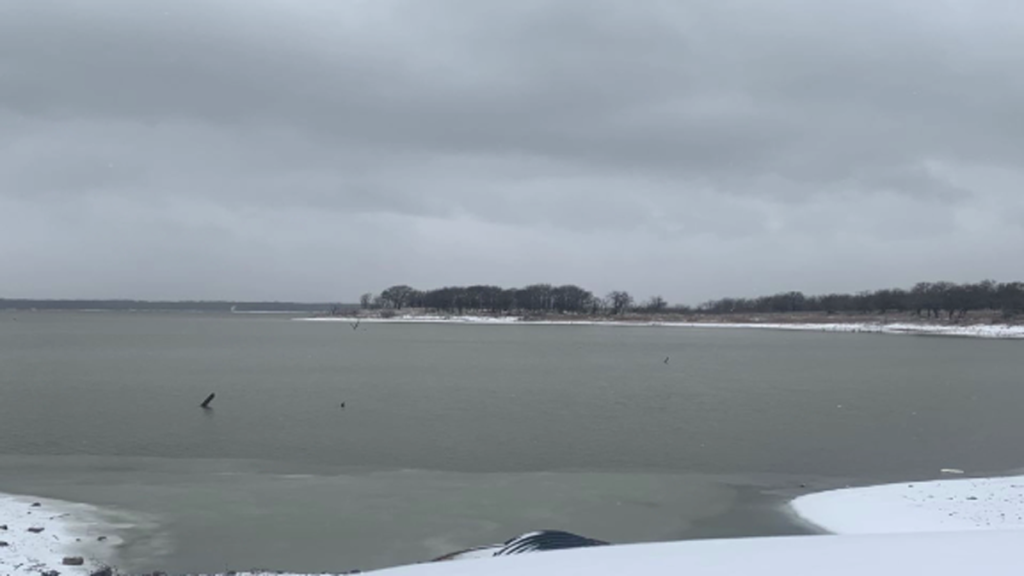 (CNN) – A woman spent two days floating alone on an air mattress atop a frigid lake. A pair of watchful freight train workers came to her rescue on Thursday.

Conductor Cristhian Sosa told CNN on Monday the BNSF southbound train was headed to Irving, Texas, from Madill, Oklahoma, in the afternoon. That was when Sosa and train engineer Justin Luster noticed her.

The woman was stranded on rocks next to Lake Texoma, a large reservoir on the border of Oklahoma and Texas, about 85 miles north of Dallas. She was waving her arms and yelling for help, according to the two men.

They stopped the train and Sosa said he walked to the woman.

The woman, who told Sosa her name was Connie, had cuts on her hands and was bleeding. “She was wet, confused and had no recollection of time,” Sosa told CNN.

“She was either in the early stages of hypothermia or she already had it,” Sosa added. The temperatures were below freezing, and it was slightly snowing, he said.

Connie told the crew that she had been floating on an air mattress for days after attempting to use it as a raft to get to a boat on the other side of the lake, according to Sosa.

Connie’s fiancé had been with her at first, Sosa said, and the couple had initially gone into the water to recover items that had fallen from that boat.

Connie told Sosa she was separated from her fiancé – who was using a different flotation device – earlier on.

She then floated for two miles down the lake, coming to a stop when she ran into what Sosa described as a levee, he said. She climbed up and sat on the rocks, and this is where the train members saw her.

“It was just kinda unexpected,” Luster told CNN affiliate KXII. “With the weather we were having we were the only train out there at the time… and I’m glad we could be there when we were.”

Connie’s fiancé eventually made it ashore, wet and freezing, and went to a nearby house to get help, according to Oklahoma Highway Patrol. The man told the highway patrol his significant other had gotten swept away a day before, police said.

Police received the call about the missing woman from her fiancé an hour before the train crew called. They did not see the woman when they first responded to the call, the patrol’s media operations director Sarah Stewart told CNN. Highway patrol officers arrived at the scene about 15 minutes after the train crew’s report.

Connie was then taken by EMS to the hospital, and the highway patrol said she is expected to survive. No information was immediately available on her fiancé.

Sosa told CNN he’s glad Connie is safe and hope her recovery continues to go well. “I’m glad I was with Mr. Luster and the both of us together could help get her some help, ”he said.

The highway patrol said since there was no crime committed, they are not conducting an official investigation.