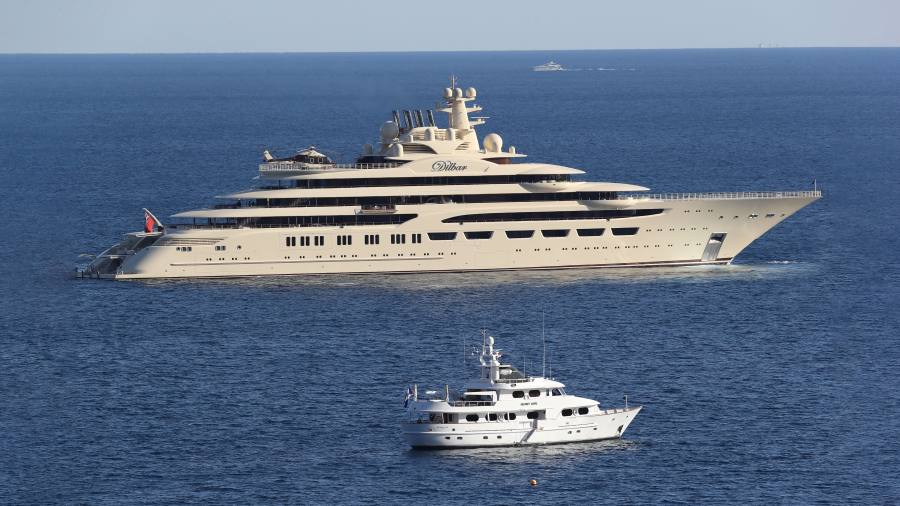 Last November, a Van Gogh painting of wooden huts set among olive and cypress trees sold at auction for $ 71.4mn. A Van Gogh is a pretty thing to hang on a wall and it certainly announces to anyone who visits that you are wealthy.

It is also a store of value. Keep it safe and you can sell it back at auction, if you need to, for liquid dollars. A superyacht, too, is a nice thing to have. It proves that you are wealthy. And you can sell it on, although you might have to wait as long as a year to find a buyer.

The problem with the yacht, though, is that unlike the painting, it is constantly trying to sink. Salt water is a harsh environment and every boat in the ocean right now is actively corroding, seizing up, weathering and falling apart.

It is only with the regular application of careful list checking, maintenance and repair that you can keep a boat on the correct side of the ocean’s surface. You can not just drop anchor, helicopter away and return a year later. Owning a superyacht is like owning a stack of 10 Van Goghs, only you are holding them over your head as you tread water, trying to keep them dry.

A superyacht is a terrible asset. The bigger the yacht, the worse. And for the biggest yachts, the marginal pleasure of each extra meter is so hard to imagine, and the marginal annual maintenance cost so high, that a massive yacht only makes sense for people who need a hard, reasonably liquid asset in their portfolio and do not have any better options.

“Superyacht” is a broad term, referring to any private vessel over 30 meters long. Industry analysts use different categories, but a megayacht is longer than 70 meters and anything over 90 meters is a gigayacht. These are rare, shy leviathans. Only a half-dozen of them launch every year.

There are only about a hundred in total. And, according to a report by The Superyacht Group, 18 are owned by Russians. In the US, there is a gigayacht for every 34 billionaires on the Forbes list. In the UK, there’s one for every 19. But in Russia, there’s a leviathan for every seven billionaires. For some reason, wealthy Russians seem to prefer the biggest boats.

The problem with size, as any yachtie will immediately tell you if you are foolish enough to stand near them, is that costs do not increase in neat proportion to waterline.

Right now the Dilbar, a 157-meter beast, is stuck in a dry dock in Hamburg, covered to the top of its radar dome in scaffolding. According to the US Treasury department, Dilbar belongs to Alisher Usmanov, who holds interests in metals and telecommunications, and is close to Vladimir Putin, Russia’s president. Usmanov is under sanction by both the US and the EU. It is unfortunate for him that his boat happened to be on hard ground in Germany when sanctions were imposed, but it is also not surprising.

There just are not that many people who know how to build gigayachts, and almost all of them are German, Dutch or Italian. Dilbar was launched by the German shipbuilder Lürssen in 2016. It had come home for a refit.

Superyachts look big and independent, like arks that will withstand any flood. But they are complicated and delicate. They have problematic openings for toys and swimmers right at the waterline, exactly where boats should not have openings. You can not fix them with duct tape and miracles. Gigayachts have to come home to the people who built them.

Gigayachts also have to be fueled and provisioned, even just to run generators in port. Management companies hire sailors and engineers, run visas and payroll. Crew costs are double for the biggest yachts, according to The Superyacht Group – anyone with the experience to run something that large can demand to be flown home for six months at a time, as the manager swaps in a second crew. Just as with the gigayacht builders, skippers and managers come from a short list of stable, liberal, boat-y democracies, friendly to the US and the EU. Climb up to the bridge, and you might hear a Kiwi talking.

According to Marine Traffic, a company that tracks identifier signals from ships at sea, the last signaled position of the 141-meter yacht Nord was off Singapore on March 22, heading north-east. Normally, ships broadcast a destination, but Nord has not signaled where it is going. It is steaming at 18 knots, its maximum speed.

Nord, launched last year by Lürssen, has been widely reported to belong to Alexei Mordashov, a steel magnate under sanction by the EU. It could be heading to a place where it is welcome, but it will have a hard time finding a place where it can be cared for. Right now, Nord is a stack of old masters, about to get wet.