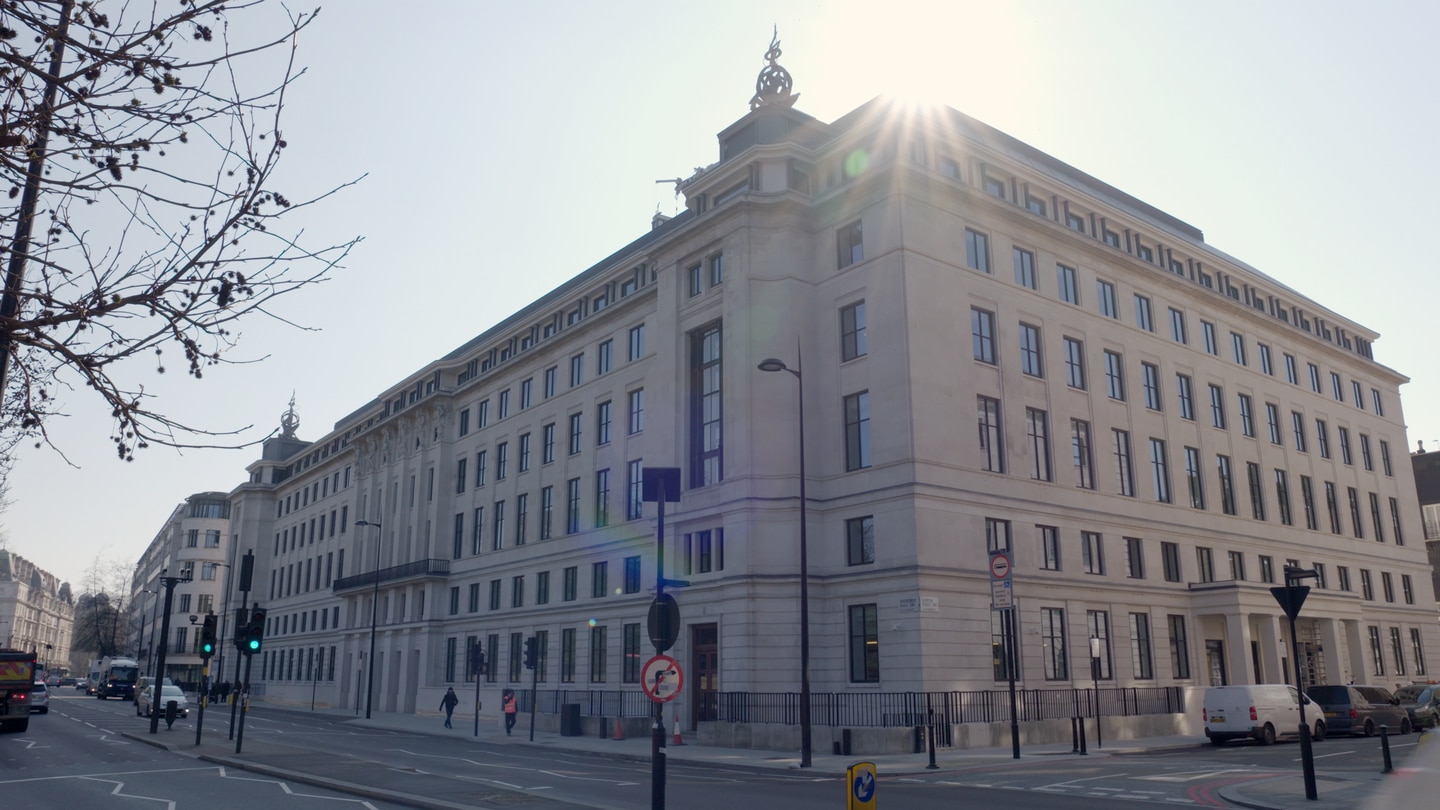 When patients recover in their fifth-floor room at London’s newest private medical facility, Cleveland Clinic London Hospital, they can enjoy one of the best views in London – a direct gaze over Queen Elizabeth’s back garden at Buckingham Palace.

A little farther afield the skyline is dotted with a collection of London’s trophy assets from the London Eye to The Walkie Talkie tower and The Shard.

While property developers might rub their hands together in glee at the potential mark-up for such prime real estate, the team at Cleveland Clinic, which plans to open its first London hospital (CCL) next week, are taking a different approach.

The new private 184-bed hospital and outpatient centre on Grosvenor Place in London’s Belgravia is being pitched as a new era for private health care in the UK, complementing Cleveland Clinic’s existing outpatient facility at Portland Place.

Unlike other private hospitals, it follows the model of care set by the US Cleveland Clinic brand, a physician-led group with no shareholders and almost all of its senior leadership positions occupied by doctors.

This approach has been adopted by the non-profit organisation across its 22 hospitals located in the US and Canada as well as at its 394-bed hospital in Abu Dhabi, which opened in 2015.

It means every decision made at the hospital has a medical point of view – in essence putting the patient first rather than the profits of the hospital, even if a patient is lucky enough to have a view of the queen’s garden.

“All surplus gets reinvested back into research, education and technology,” says Dr Brian Donley, chief executive of CCL.

It’s a different style for the UK’s healthcare system, which relies heavily on the free National Health Service, which is currently under enormous pressure with record waiting lists and a backlog of routine operations and cancer care as it emerges from the Covid-19 crisis.

Visit the gleaming new hospital in the UK capital, which has Portland stone cladding on the outside, and the marble flooring, wider corridors, spacious rooms and operating theatres make it clear the London team took inspiration from the group’s Abu Dhabi site.

One of them is the staff, with a large number of nurses from Abu Dhabi applying for the 450 positions open at the London site.

Walking through the hospital earlier this month, Dr Mihaljevic says he spotted “quite a few faces that I recognise from my time in the UAE”.

The patient-centric model of care is also the same, he says, but the main similarity is that both the London and Abu Dhabi sites are greenfield projects “meaning we had to start from scratch”.

“This has its risks and benefits because we could design the space that fits the contemporary needs of health care,” says Dr Mihaljevic, who joined Cleveland Clinic in 2004 as a surgeon in the thoracic and cardiovascular surgery department.

“We didn’t have to retrofit something that was built hundreds of years ago to what we will need today and for tomorrow, we can implement and bring the technology that is going to improve the quality and safety of care, which we’re very passionate about.”

With the brand priding itself on being able to treat the “sickest of the sick”, that approach will also apply in London where it will be a full service hospital with a focus on four key areas: cardiovascular, digestive, neurological and orthopaedic care.

The London site will offer 29 intensive care beds, making it the second largest private ICU in the UK after the Wellington hospital, as well as eight operating theatres, 21 day-case rooms for surgery and a 41-bed neurological rehabilitation ward – one of the largest in the private sector.

Step into the neurological operating room and it is twice the usual size and comes with a rarity for the private sector: double doors that open straight on to an intraoperative MRI scanner.

This allows brain surgeons to instantly confirm that a brain tumour or brain lesion has been successfully removed before they close up a patient.

“In times gone by, we had to assume we’d done a good job and maybe two or three days later, when the patient is well enough, go and have a scan,” says Dr Andrew McEvoy, professor of neurosurgery and institute chair of neurosciences at CCL.

“So why would you not confirm the lesion is all gone before the patient comes off the operating table?”

Such cutting-edge methods to enhance safe clinical care can be seen across the hospital – even in its pharmacy.

There a robot, which occupies an entire room, laser-cuts strips of tablets into single doses, retaining vital information such as the medication’s expiry date and adding a barcode that can be checked when the dose is loaded into a dispensing cabinet and again before it is administered to the patient.

Studies have shown that giving patients single unit doses can decrease patient administration medication errors by about 50 per cent to 60 per cent, says Francine de Stoppelaar, director of pharmacy and hospital operational activation lead at CCL.

Any medication not used is simply put back into the system, slashing wastage in the process.

Patients can monitor their own treatment plan and test results on the patient portal My Chart, to ensure they are fully up to speed.

For the doctors, meanwhile, the hospital offers ”a truly integrated patient record electronic record” – a first for the independent sector, according to Mark Hamilton, CCL’s chair of medical subspecialties.

“It allows everybody who needs to see what is happening to the patient to access this [information] either from portable computers, fixed desktops or mobile devices,” he says.

“So rather than having a piece of paper at the end of the bed, on which people overnight can plot how a patient is deteriorating, the system has artificial intelligence which broadcasts the vital signs to computer screens out in the nurse’s offices around the ward.”

Having patient care so central to CCL was one of the attractions for Dr Hamilton, a former internal medicine consultant at the Royal Free Hospital in London.

He has worked on the CCL project for seven years and says the reason for joining was the “unique opportunity to work with a physician-led organisation that has a culture that puts patients first and then brings the technology and the teams together to deliver that”.

“The most important thing about this building is not the technology; it’s not that it’s a shiny building; it’s not the way that it looks, it’s the team behind this,” Dr Hamilton says.

“The physicians and nurses have been involved in the way the building is constructed so that the patient flow makes sense, the technology is in the right place and that technology helps you look after patients.”

With almost 1,200 caregivers working at the hospital, including 270 doctors and 450 nurses, with the majority of the nursing staff recruited from across the international organisation as well as locally within the UK from private and NHS hospitals.

Dr Donley emphasises that the recruitment from the NHS will not be too burdensome for the organisation at a time when the state health service is buckling under the strain of long waiting lists.

“Less than half of those 450 nurses would be from the NHS. To put that in perspective, in the NHS, there are 300,000 nurses,” he says, adding that doctors are also expected to stick with their NHS commitments.

“We only hire doctors for their private time, so they will continue their commitment to the NHS,” he says.

Among the Abu Dhabi faces that have joined the London clinic is Sonia Kelly, head of clinical informatics at CCL, who has worked in nursing for more than 20 years after starting her career in Ireland as an ICU nurse.

“Abu Dhabi an amazing place to work,” she says of her experience at CCAD.

“I promised my mother faithfully, I’d only go for a year and I stayed there six years, to her disgust. I think the nice thing about transitioning between CCAD and CCL is it’s the same model of care and the same values and very similar to here – brand new facility, brand new staff, brand new technology.”

Ms Kelly has now been in London for four years with her role in London to bridge the gap between the clinicians on the ground and at the bedside in the ICU, which is designed to treat critically ill, post-complex surgery patients who require 24/7 intensive care.

Dr Mihaljevic says the strong ICU capacity is a big differentiator between CCL and many other private hospitals in London, enabling the hospital to care for the most complex and the sickest patients in the world.

“That is what we’re known for. People come to Cleveland Clinic when they run out of hope. That’s what we do. That’s why we want to make a difference,” he says.

Making a difference to patients with private health care, international visitors or those who can afford to self pay is to be expected from a private hospital, with GCC patients, for example, able to start their treatment in Abu Dhabi and continue it at CCL or a US location should they so choose.

But the team stresses that the London branch will also collaborate with the NHS not only to help critically ill people but also to ease the NHS’s post-Covid waiting lists.

“Here, just like in the UAE, we came to be a collaborator and contributor to the local and regional healthcare landscape,” Dr Mihaljevic says.

“Health care is a contact sport, so to say, it is different in every location; the needs, the culture in every country is different.”

While in the UAE this meant supporting healthcare challenges the country and wider region faces, such as diabetes and obesity, as well as catering to the ultra-wealthy patients with specialist suites and services, the UK service must also support the work of the country’s much-loved NHS.

“We do expect to take care of some NHS patients to help with the backlog,” Dr Donley says.

Those discussions are already under way with a number of NHS trusts says Dr Jamanda Haddock, associate chief of staff and the chair of hospital services.

“We do expect to see some NHS patients, particularly around complex care and diagnostics.”

The backlog in London and the wider UK is also evident around the globe, which is why the Cleveland Clinic team is committed to helping deliver the UK’s Covid recovery plan and in turn drastically slash waiting lists.

“We came here to combine the best of our 101-year legacy with the best of UK health care and the reason we’re in London, is because we think this is one of the best healthcare and life science ecosystems,” Dr Donley says.