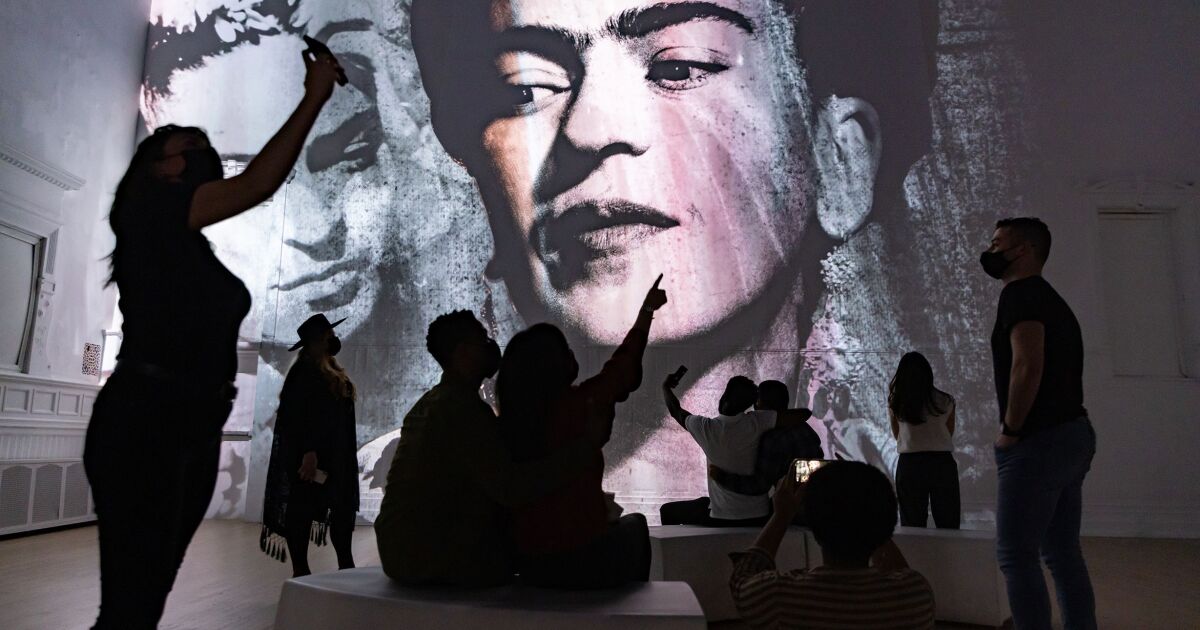 “Immersive Frida Kahlo” is joining “Immersive Van Gogh” in the former Amoeba Music building in Hollywood – it opens to the public Thursday.

Rolling out in nine cities in the US and Canada, it’s a somewhat more robust experience than the Van Gogh show. And although the Kahlo show of video projections and music is just as colorful and sonically dynamic as the Van Gogh, it similarly bears elements that may seem at odds with the artist’s life and career.

The Van Gogh show – for which adult general admission starts at $ 39.99 and which has seen more than 5 million visitors across North America – is a commercial spectacle of work by an artist who could not sell his paintings in his lifetime.

Meanwhile, the Frida Kahlo exhibition, co-produced by Lighthouse Immersive and Impact Museums, includes yoga programming for those interested (though it’s not required). For $ 54.99, visitors can partake in 35 minutes of custom flow in the art space before it opens on select days, down-dogging as images of Kahlo and her paintings swirl across the walls, floor and visitors’ outstretched bodies. They can then stay and watch the rest of the show.

Yet the iconic late Mexican artist was unable to move easily after having suffered from polio as a child and, later, survived a bus accident that broke her spine and shattered her pelvis and leg. She wore a back brace and spent weeks in bed and in pain.

The “Immersive Frida Kahlo” website makes no mention of whether the yoga classes are accessible for attendees with disabilities. Lighthouse says the teachers, from local studios, are trained to work with students with injuries and disabilities.

The show, created by Italian film producer and exhibition creator Massimiliano Siccardi and featuring original music by Italian composer Luca Longobardi, is quite different than the Van Gogh – it offers more of a narrative. “Immersive Van Gogh” features an abstract mashup of meditative, melancholic imagery that’s alternately soothing and haunting. By contrast, “Immersive Frida Kahlo” tells a story – if by necessity. Unlike Van Gogh, the artist’s images are not in the public domain. So the producers had to license images, and they supplemented the work with photographs of Kahlo and others in her life, such as her husband, Diego Rivera, and her family.

There was also less artwork to choose from, says Lighthouse creative consultant Richard Ouzounian. Kahlo made 143 paintings in her lifetime, in addition to drawings; Van Gogh painted more than 900. But ultimately, telling a story about Kahlo – “Her life. Her love. Her art, ”as the marketing text goes – was a deliberate creative decision, Ouzounian says.

“Massimiliano wanted to add that texture. He kept saying, ‘Frida’s life itself is part of the process,’ “Ouzounian says. “With [‘Immersive] Vincent, ‘even if Massimiliano wanted to, there was not as much [supplementary visual material] he could have added; people weren’t taking photographs much then. ”

Mara P. Kahlo and her daughter, Mara De Anda, who are related to Kahlo through the late artist’s sister, Cristina, run the nonprofit Fundación Familia Kahlo (the Kahlo Family Foundation) – which oversees Kahlo’s image and aims to preserve her legacy – and were strategic advisors to the show. Photos in the exhibition were licensed through the estate, among other places.

The pace and narrative arcs of the two shows suit the individual artists, Ouzounian adds. Vincent’s journey was so much inside his head; Frida’s included Mexico, Diego, the Mexican Revolution. It was more active. ”

It begins with images, many of them from Rivera’s paintings, from around Mexico and Mexico City at the turn of the 20th century. It winds through Kahlo’s youth, her tragic bus accident and the meeting and marrying of Rivera, followed by their five or so years living in America in the 1930s. We see Kahlo’s early work, followed by her prolific painting and growing success as an artist. Ultimately, the narrative swells with physical and emotional pain from her marital troubles, isolation and lingering injuries.

A particularly vivid section, incorporating photos, newsreel footage and Siccardi-created collages, covers the Mexican Revolution and Kahlo and Rivera’s involvement with the Communist party. Another intimate section depicts Kahlo’s near-fatal miscarriage, hospitalization and subsequent struggles, unsuccessfully, to have a baby.

But the show is as much about Kahlo’s joys and passion for life and art as it is about her pain, as seen through colorful butterflies, blooming flowers and self-portraits of the artist.

“It might feel odd, given her disability,” says a representative of the show, Leisha Bereson, “but it also makes perfect sense. This space and the format is meant to be a reflective experience for the visitor, and it’s an extension of that. ”

“Immersive Frida Kahlo” will run solo in the Amoeba Music building for its first two weeks, at which point it will switch off every other day there with “Immersive Van Gogh” through at least the end of May. Given the popularity of the two shows, an extension is likely.

As with “Immersive Van Gogh,” the lounge area features custom artworks designed by the show’s creative director, David Korins (set designer for “Hamilton”), including a mosaic tile installation of Kahlo based on one of her 1940s-era self-portraits and a cylindrical, Rubik’s Cube-like wooden sculpture, featuring prints of different Kahlo self-portraits. Visitors are invited to spin the different layers in the work, mixing and matching Kahlo’s facial elements.

And the Van Gogh signature drink, the Sunflower, is still on hand in the lounge’s sunflower-themed bar. But it’s now joined by a pineapple margarita.