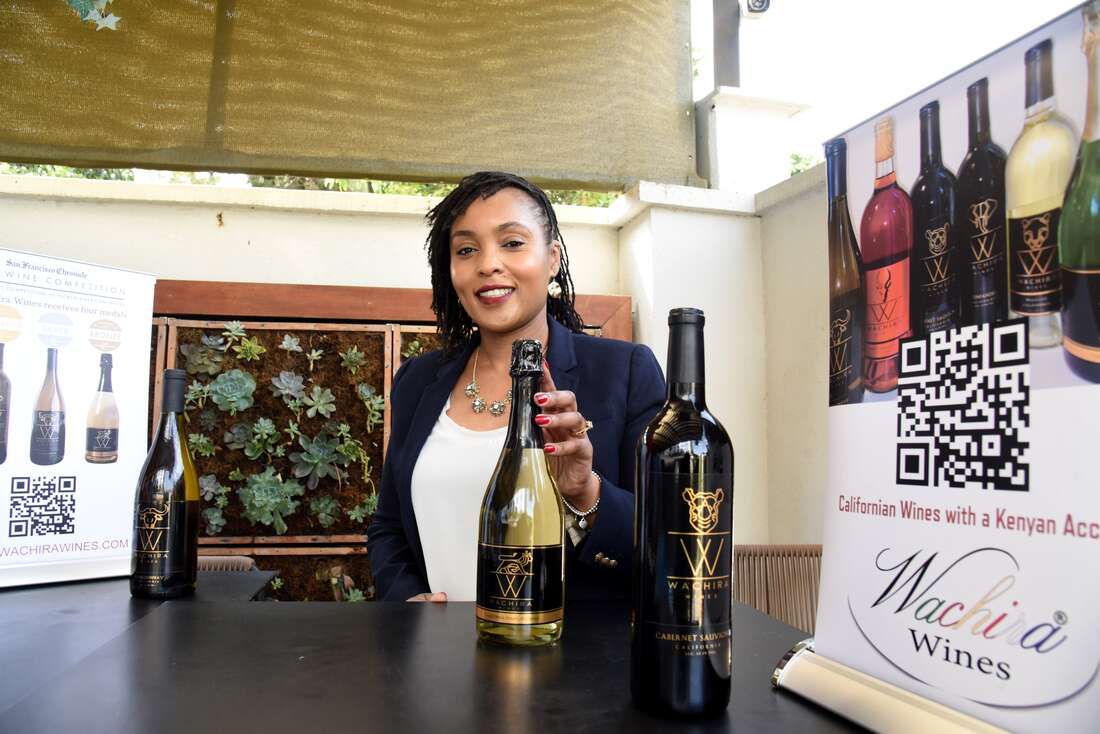 It is not often that someone goes abroad for studies and makes a detour to winemaking. It is even more uncommon that one would do so in a part of the world where less than one percent of wineries is owned by black people. Yet it is a gamble that Chris Wachira, the founder and CEO of California-based Wachira Wines, was willing to make.

Born and raised in Kenya, Wachira went to the US in the 1990s to study nursing, staying on to undertake her Master’s in public policy and later a doctorate.

When she started Wachira Wines in Eat Bay, California, the first Kenyan-American winery in the US, in 2017, it was unexpected but a desired direction in her professional life. The entry was tough, the investment substantially high. Then there was the initial skepticism.

But five years later, she is revelling in a season of full-circle abundance. The company now crafts six “Californian wine brands with a Kenyan accent” including cabernets, zinfandels, Muscat and Chardonnay, consumed in the US, Japan, and Canada. She was recently in Kenya to promote the brands.

But why wine for someone with a nursing inclination?

Every subsequent decision and every investment she has made has been driven by the need to fill a gap in the wine industry, she says. That and the desire “to highlight the intentionality of representation of black people, especially women, in winemaking.”

“When people send their children abroad for studies, they want them to take up grand professions in law and medicine. But winemaking is also a viable option. I want young people to see that in me. It is a viable business, ”she says. Kenya is not known in the world as a wine country. I wonder the kind of reactions she gets when she rises to talk about wine.

“Most times people are curious. People ask me: do you really make that wine? When I teach them how to pair it, they get pleasantly surprised. ”

Others wonder why she named it Wachira. “The Robert Mondavi family in California call their wine Mondavi. The Kendall Jacksons call theirs Jacksons. I named mine Wachira because it represents who I am. ”

Setting up a winery in a foreign country as a black person and as a woman is not one of the easiest things to do. Wachira says the wine industry is heavily white-male dominated. So how did she start?

“I had been meeting winemaking families. I also went for tastings in the vineyards for years, where I created networks. ”

It is during these interactions that she met her husband Chadwick Spell, now the chief operating officer of the wine company. “We were five when we started; him and me, his brother and my two brothers. Now we are about 20. ”

How does she source her grapes? Wachira says she has multi-year contracts with farmers in Napa, Lodi and Paso Robles regions in California who supply the grapes.

“The regions are different in topography, the soils, and climate. Each of the wines we make has grapes from two of the three regions. Our Cabernet has grapes from all three, which creates a very unique flavor profile. ”

Owning a vineyard, is it something she hopes to do someday?

“With global warming and climate change and their impact on agriculture, that is not my desire. I have partners who are going to fulfill that part of the business (producing grapes). ”

If setting up a winery is difficult, marketing it takes the biscuit. When the company started, the focus was on festivals and social events such as parties. Getting her products on shelves was a challenge.

Major distributors did not think I was large enough to support. When I met Spell, we built our distribution company, Soko. Soko creates access pipelines for minority-owned brands and small and locally-crafted wine brands, ”she recalls.

What started in California as a distribution avenue for local beverages has now become the “Amazon” of minority winemakers carrying wine, beer, and liquor produced by minorities nationally.

Wachira Wines has also scaled to corporate events, and opened “Karibu” a tasting room in East Bay in California for wine experiences.

The ongoing cultural shift, driven by the Black social awareness movement since 2020, has been pivotal to her growth.

“There has been intentionality among people in looking for specifically black-owned businesses. When this movement started, we were able to pivot and target this opportunity since we were already positioned. ”

Her being in this industry is serving another purpose: to address the exclusionary nature of wine. Out of about 11,000 wineries in the US alone, less than one percent are owned by Blacks. Even fewer by black women.

“I want folks to come and experience wine from a position of inclusion without judgment or fear of ignorance. I want people to have fun with it and learn about it, ”she says.

Selling elsewhere in the world has been fairly smooth-sailing for the brand, particularly in Japan. Wachira says the Japanese, like the Chinese, like American products, which has made an entry of her wines less arduous.

So, why Kenya? Why now? Wachira insists that it has always been about Kenya for her. “There is a certain sense of nationalism everywhere in the world, including in the US. As a Kenyan, I want to be connected to my motherland. ”

She adds that she has kept pace with the progression of the Kenyan wine market, and is she is impressed by Kenyans’ curiosity to learn about wine.

Like other minority wineries, her journey has not been without challenges, the main one financing.

“The wine business is capital-heavy, that is, buying the grapes, the machinery and storage facilities for the grape juice to age it. We are self-funded. We reinvest the money to help the business grow, ”she explains, noting that few lenders have been willing to fund in the business.

The other challenge has been having to continuously convince the market about their products. This has yielded fruits, with the company being recognized during wine competitions in the US.

“We have a very loyal customer base. Our following is growing. ”

On competing with more established traditional brands, Wachira says everyone has a flavor profile that appeals to their palate.

“At my tastings in Alameda, California, I serve different cabernets and zinfandels from other wineries as well. I do not try to make my wine like the Americans, Italians, or French. That [style] is taken. I am authentically Kenyan. I craft my wines using formulations that appeal to my Kenyan palate. ” The only palate that is correct is yours, she adds.

After five years in the industry, the importance of branding has been one of her biggest lessons.

“People connect [with a product] visually before they taste it. If I do not like what I see, I will not pick it up to taste it. ”

There is also having a storyline that goes with the brand. “This makes it personable and relatable to people. Wine is as individualistic as the person who makes it. ”

“Each of the wines matches the characteristics of the animal depicted in its flavor profiles. The lion, for instance, which is the symbol of our sparkling wine, can start and end any party. A lion is commanding. ”

She says this wine variety pairs well with lemon cake. “My mother makes lemon cake today as she has done since I was a little girl.”

Does she have a private cellar? Two, she says. One at home another at the tasting room.

I ask the type of wines she stocks.

“I like my wines well balanced. I do not like them heavily tunic reds. I like them to be fruit-forward with some dryness. I do both reds and whites. But sparkling wine is my current obsession, ”she adds.

Where she has failed, Wachira has taken it as part of the learning curve. Her debut production, for instance, was a disaster and never saw the market. With time, her craft has only gotten better.

On how far she is from actualizing her dream, Wachira says: “Some people have been making wine for generations. After only six years, we are still a baby that is still learning to crawl. ”