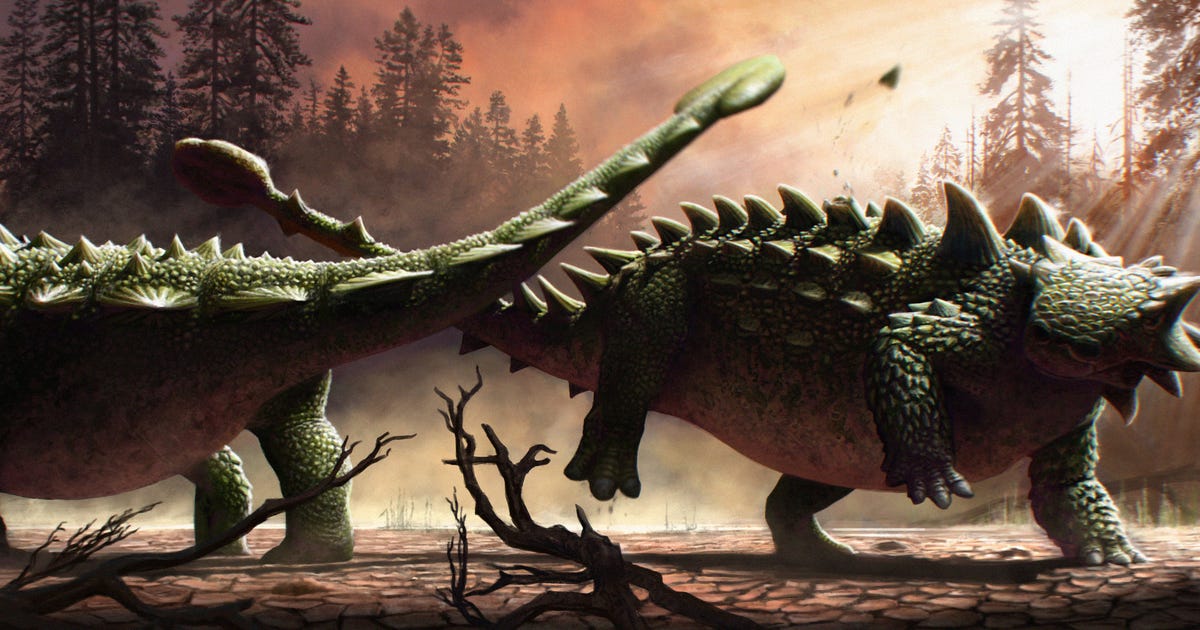 Some dinosaurs are automatically cool. Scary T. rex. Horned triceratops. And, especially, the spiky ankylosaurs — squat, armored beasts with wicked club-like tails. Paleontologists have long thought those tails were for fending off predators like T. rex, but new research suggests they may have been for in-fighting as well.

A team of researchers from the Royal Ontario Museum (ROM), Royal BC Museum and North Carolina Museum of Natural Sciences published a study in Biology Letters this week on a remarkable and rare fossil of Zuul crurivastator. The ankylosaur had damaged and healed spikes near its hips. The scientists suspect the injuries came from another ankylosaur delivering a mighty whack from its own “sledgehammer-like tail.”

Zuul crurivastator may have gotten testy with its own kind, much like modern-day deer, kangaroos and zebras. “This suggests ankylosaurs had complex behavior, possibly battling for social and territorial dominance or even engaging in a ‘rutting’ season for mates,” ROM said in a statement on Tuesday.

The plant-eating ankylosaurs lived 76 million years ago. It took years of excavation work in Montana to extract the Zuul crurivastator fossil at the heart of the study. The fossilized skin and armor shows injuries where spikes were broken and then healed into a blunted shape, a pattern more consistent with battling other ankylosaurs than suffering an attack from a predator like a tyrannosaur.

As an aside, the Zuul crurivastator name is worth delving into. Zuul is for the horned gatekeeper from Ghostbusters, while the rest of the moniker translates to “destroyer of shins,” a reference to how the dinosaurs likely used their tails to take out the legs of tyrannosaurs. Perhaps it needs a new nickname: Zuul, destroyer of flanks.


The Brilliance and Weirdness of ChatGPT