6 takeaways from the Chicago Bulls’ blowout loss to the Phoenix Suns, including Devin Booker’s explosive 51-point performance – The Mercury News 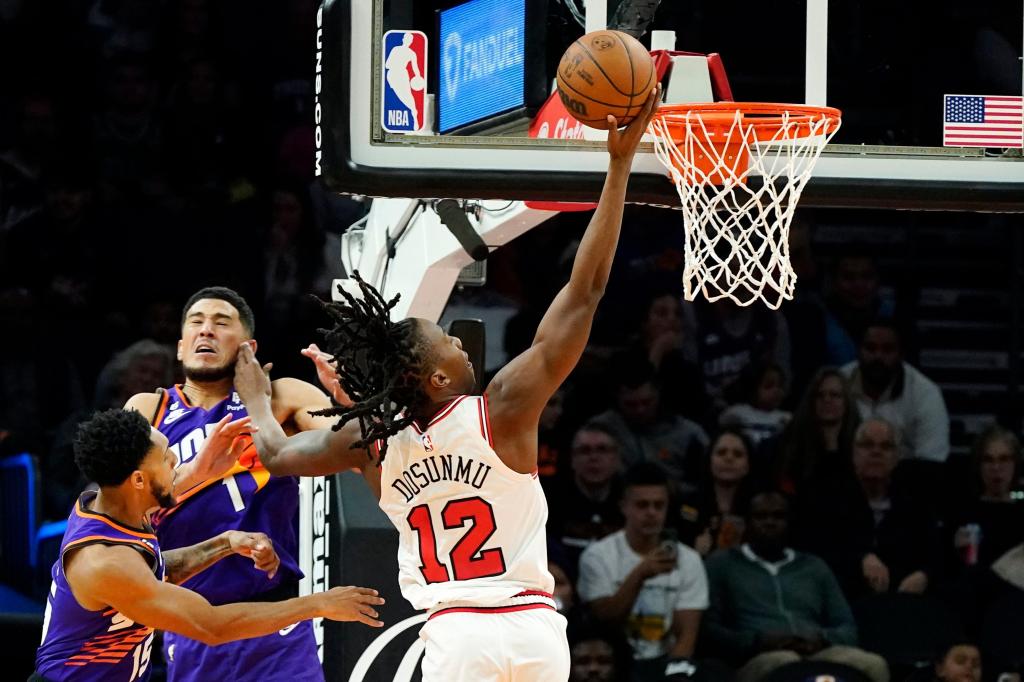 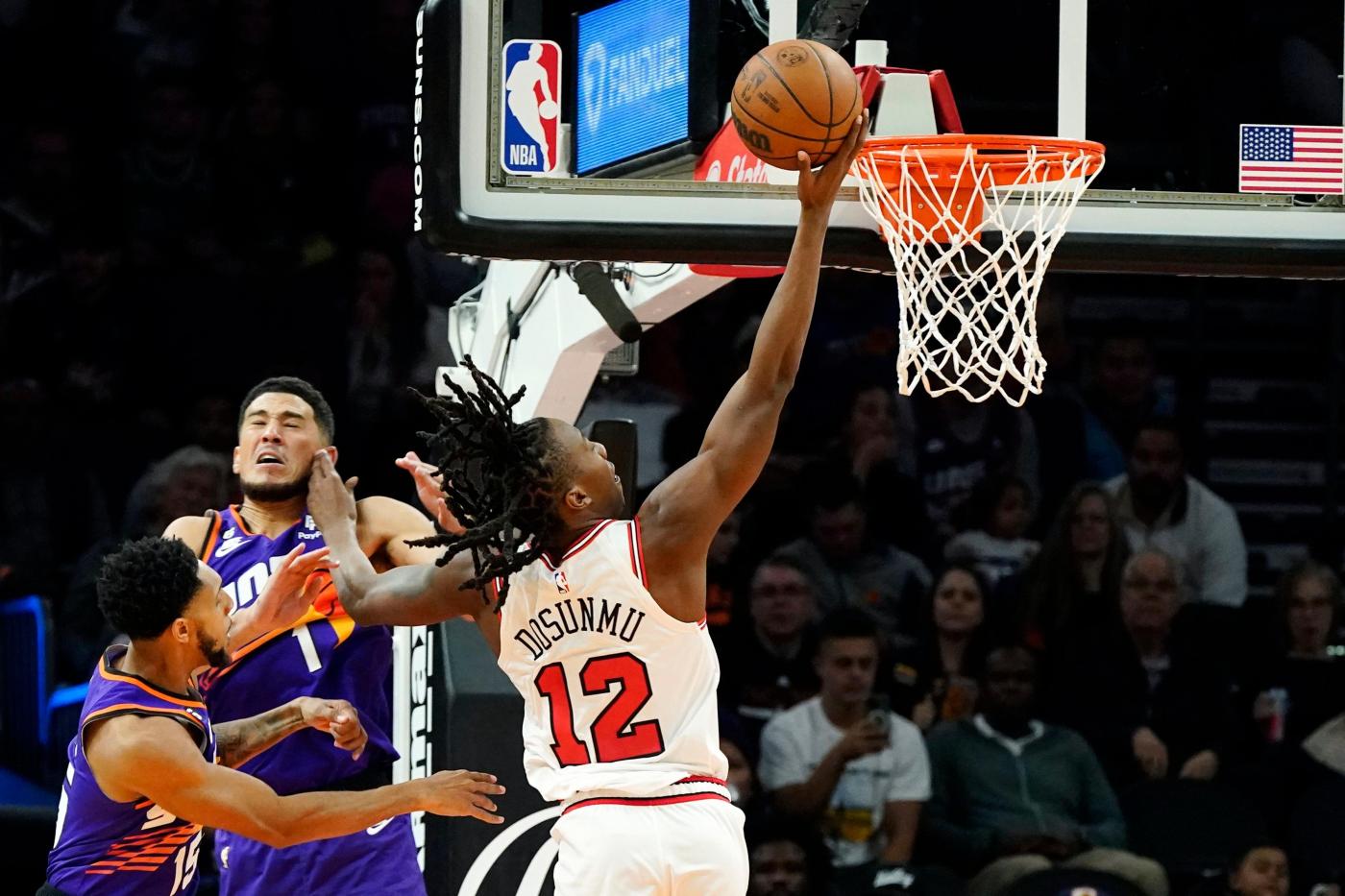 The Chicago Bulls suffered a 132-113 loss to the Phoenix Suns on Wednesday night as Devin Booker scored 51 points in only three quarters.

The loss dropped the Bulls to 9-12 and into the No. 12 spot in the Eastern Conference.

Here are six takeaways from the loss.

1. The Bulls had no answer for Devin Booker.

Booker dismantled the Bulls defense in a dominant three-quarter performance, scoring 51 points in just under 31 minutes. He shot 20-for-25 from the field, including 6-for-7 from 3-point range, in the fourth 50-point game of his career. He also tallied six assists, four rebounds and one steal before sitting the entire fourth quarter.

Bulls coach Billy Donovan threw a litany of defensive sets at Booker, attempting to use Alex Caruso, Derrick Jones Jr. and Patrick Williams to guard the Suns star. But nothing seemed to work on Booker’s explosive offensive night.

“We trapped him. We threw a box-and-one at him. We tried to faceguard him,” Donovan said. “To his credit, he had a great night. He shot over us a lot of times. He really, really, really got it going.”

2. Defensive rotations floundered in the first half.

The Bulls were out of sync on defense from the opening tip — and it showed beyond the stat lines.

Center Nikola Vučević pointed emphatically at the court while laying into guard Ayo Dosunmu after a missed rotation in the first quarter. After Dosunmu failed to close out on Booker in the second quarter, Donovan showed visible frustration with the second-year guard as he called a timeout.

“Ayo’s got to recognize a guy’s got 40-something points — go get him,” Donovan said in explanation of the tense timeout. “Get the ball out of his hands.”

The Bulls simply cannot outshoot opponents from behind the arc. The Suns outscored them 45-12 from 3-point range. Booker finished with more 3-pointers (six) than the entire Bulls offense (four).

This is not a new issue for the Bulls, who listed 3-point shooting as one of their top concerns heading into the offseason, only to fail to add any starter-quality outside shooters. Even with a full-strength roster, the Bulls aren’t a team that will live and die from behind the arc, and injuries are exacerbating this weakness.

Zach LaVine (1-for-6 on 3s against the Suns) has been hampered since the start of the season. Goran Dragić is 1-for-7 from behind the arc since suffering a shoulder injury against the Boston Celtics on Nov. 21. Lonzo Ball might provide a boost from long range, but Donovan made it clear Wednesday that the point guard remains far from a return.

Caruso is the only player consistently making 3s, finishing 2-for-4 on Wednesday. Coby White provides streaky shooting, but his 0-for-2 night against the Suns showed the Bulls can’t rely on him for long-range offense.

Outside of making a trade, it’s unclear how the Bulls can address this problem, which will only deepen as the season progresses.

4. The offense fell stagnant in the second quarter.

The Suns were already on their way to locking down the Bulls in the first half, but a completely stagnant second quarter cemented the advantage. The Bulls scored only 18 points in the quarter, allowing the Suns to take a 21-point edge into the locker room.

The Bulls shot 31.8% from the field and went 0-for-7 from 3-point range in the second quarter while turning the ball over three times. Booker went 6-for-8 from the field and scored 16 points in the quarter — nearly outscoring the entire Bulls offense.

5. The Bulls remain inconsistent vs. the top teams in both conferences.

Last season the Bulls garnered a reputation for folding when facing top teams. They finished 2-21 against the top four teams in the Eastern and Western conferences.

That hasn’t been the case this season. The Bulls picked up two important wins over the Boston Celtics and Milwaukee Bucks, showcasing their ability to compete against the best in the East. But after blowout losses to the Denver Nuggets and Suns, they also haven’t proved they can reliably give that level of performance.

“The disappointing part of the challenge is that we’re consistently being inconsistent,” Donovan said. “At times we compete like two different teams. We can be a team like in Utah (on Monday) that’s really helping each other and we’re kind of on a string and we’re moving. Other times we’re not like that.”

6. The Bulls need to win the last two games on their trip.

One silver lining for the Bulls: The remaining two games of the six-game trip present manageable opportunities for wins. They play the Golden State Warriors (11-11) on Friday and the Sacramento Kings (11-9) on Sunday.

The Kings were on a three-game losing streak before blowing out the Indiana Pacers 137-114 on Wednesday, while the defending NBA champion Warriors have been inconsistent throughout this season.

Winning both games this weekend would allow the Bulls to return to Chicago one game below .500. But two losses could have a disastrous opposite effect, dropping the Bulls deeper into an early hole.

Peso strengthens further vs the dollar on dovish Fed comments