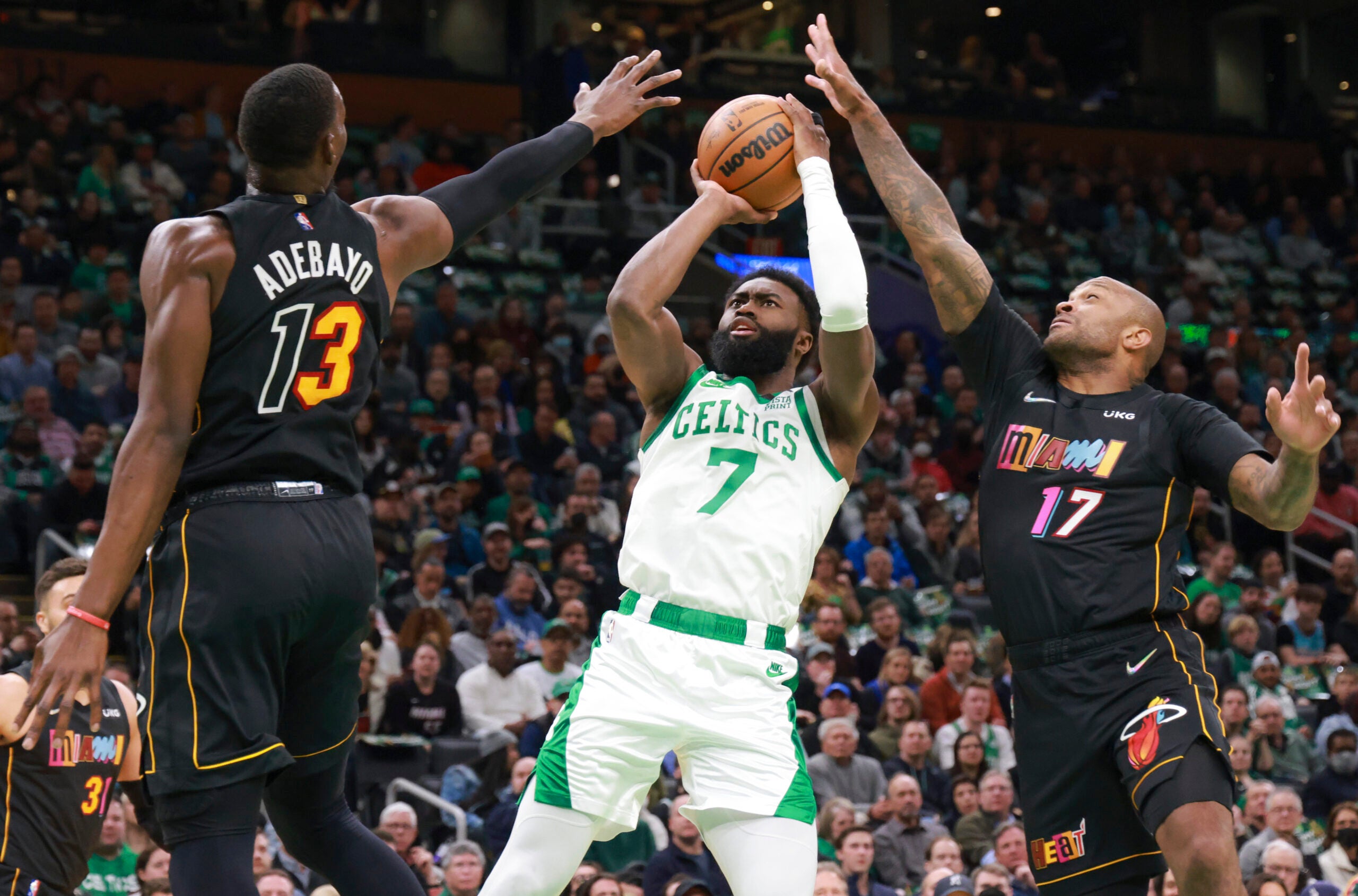 Wednesday’s game against the Heat felt like a preview for a Celtics team that has largely been obliterating its opponents over the last two months.

“This is a good test playoff-wise,” Ime Udoka said. “This is what it’s going to be like coming up in a few weeks here.”

In the Celtics’ first contest at full-strength-minus-Rob-Williams, the Heat came out firing. Jaylen Brown matched them for a few minutes in the first quarter, and the Celtics answered several Heat rallies with their own – including a 16-0 run at one point in the second half – but the Heat focused their defensive energy on Jayson Tatum and held the Celtics to just 15 fourth-quarter points to pull away.

“We got to the basket and had some really good looks, but it’s a team that clogs the paint and tried to obviously go after JT at times and make others try it,” Udoka said. “You get to the basket, some calls that could have gone both ways that they did not call. You have to see your outlets there, whether it’s a dump off or kick out. The paint was clogged but I felt we got good looks at the basket that we just did not finish. ”

The Celtics now have an uphill climb to the No. 1 seed and can probably focus their attention elsewhere – as Udoka noted, the team is less focused on seeding and more focused on trying to play its best basketball at the right time. The Celtics trail the Heat by two games in the standings and dropped back to fourth in the East with five games remaining. In a first-round series, they would face the Bulls. In a second-round series, they would (presumably) face the Heat.

2. Much will be made of the officiating, somewhat reasonably – the referees seemed to lose control of the game down the stretch. Marcus Smart was tossed after a particularly costly missed out-of-bounds call in the final seconds sealed the game for the Heat. Tatum picked up a technical – his 13th of the season, which puts him just three away from having to sit out a game.

“The previous 12 techs, I’ve looked at all of them – I agree with probably 10 of them I deserved,” Tatum said. “But tonight, I do not know. That’s the one I got to think about and watch. That was a tough one. I was trying to have a conversation. I was asking questions. It’s unfortunate that I got that tech, but just something that we got to move on from and continue to keep playing. ”

“It’s easy to look back now after the game and say there’s a lot of s— we could’ve done better,” he added.

To Tatum’s point: The Celtics lost because they could not stop turning the ball over – 17 total, including six by Smart and four by Tatum – and because they really missed Robert Williams, whose vertical spacing and rim protection was visibly absent. Tatum and Grant Williams combined to shoot 0-for-8 from 3-point range. Add Smart, and the Celtics were 3-for-18 from deep.

Some of the calls were bad (both ways, in many cases), but the Celtics were too, and the latter impacted the final result quite a bit more.

“I think at the end of the day, for us, we’ve done a good job of that this year, and it’s just being able to play through and just not worry so much,” Al Horford said. “And I think tonight for whatever reason we got caught up in it a little bit and we learn from this and hopefully we put it behind us, that part of it.”

3. Smart put together a masterful defensive game despite the loss – the type of performance that solidifies a case for Defensive Player of the Year. With Williams out, his responsibilities on the defensive end tick up significantly and he seems up to the challenge of directing the fleet. His teammates need to prove the same.

“I just think it’s going to make us better,” Horford said. “Because once we have our whole team again, it will be another dimension for our group.”

“The main thing is optimistic because the surgery went as well as it could,” Udoka said before the game. “Obviously the better option to have the option that he did vs. being out the long-term. So you look at that 4-6 week window and look at cases in the past and how fast guys can come back. So he’ll hit the ground running pretty much tomorrow and try to get some two-a-day work in and try to ramp it up from there. ”

5. The Celtics have been one of the league’s worst teams in crunch time all season, an odd stat given their recent dominance. Per Cleaning the Glass, the Celtics have the net rating of a team that should have 53.5 wins so far and should be on pace for just under 58 total.

One reason that number is so high? The Celtics have not really played close games during this dominant stretch – most of their wins have been very comfortable.

Still, Horford shook his head when a reporter asked if the Celtics believe they might have crunch-time issues when the games get close during the postseason.

“You give [the Heat] credit: They’re scrappy, they came, they fought, they junked the game up at times there, ”Horford said. “But I feel confident in our guys and the things that we need to do. I just think that over this past month, we’ve played a lot of really good teams and they’ve been different types of tests. To your point, we have been able to kind of just dominate and today’s was just a different way. We did not get it done, but I was happy with the effort from our group. ”

6. Daniel Theis had a really nice evening – 15 points on 6-for-6 shooting. He might not quite be the rim protector or scorer Robert Williams can be, but he’s a solid player and provides some of the production Williams offers.

Given that Williams will likely be back at some point in the postseason, all Theis needs to do is hold down the fort.

The Celtics take on the Pacers – one of the few teams to beat them during their hot streak – on Friday.

Get breaking news and analysis delivered to your inbox during basketball season.