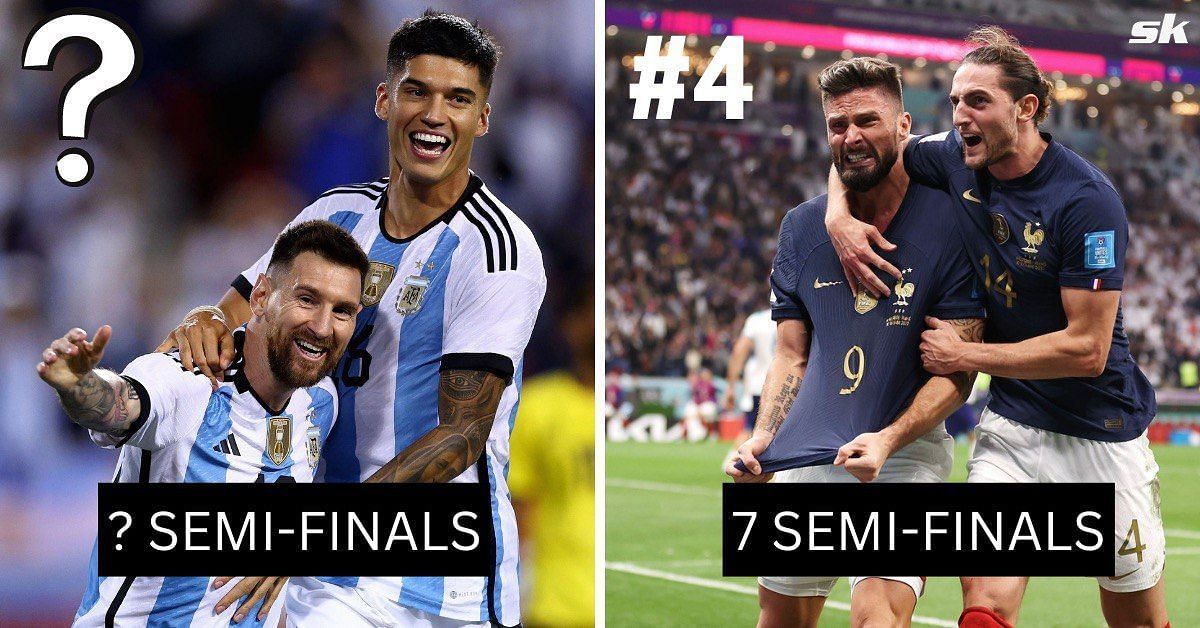 Argentina, Croatia, Morocco, and France are the four finalists of the 2022 FIFA World Cup. Each team has fought tooth and nail to get here, beating some excellent teams in the process.

Going so deep into the tournament requires unmatched dedication and enviable quality, which is why only a handful of nations have managed to qualify for the semi-finals multiple times. Today, we will take a look at five nations that have been serial semi-finalists in World Cup history. Here are the top five nations with the highest number of semi-final appearances at the FIFA World Cup:

Two-time world champions Argentina will play in their fifth FIFA World Cup semi-final when they meet Croatia at the Lusail Iconic Stadium on 13 December. Argentina, who are competing in their 18th World Cup in Qatar, will compete in their sixth final if they overcome the Croats on Tuesday.

La Albicelste, who beat Netherlands 4-3 on penalties (2-2 after extra time) in last week’s quarter-final, previously qualified for the semi-finals eight years prior, in Brazil. They played out a goalless draw with the Dutch in the semi-finals before beating them 4-2 on penalties. La Albiceleste, however, failed to take the final step, losing 1-0 to Germany in the final.

Defending world champions France, who have appeared in 16 editions of the FIFA World Cup, have qualified for seven semi-finals. One of the final four teams of the Qatar World Cup, Les Bleus won three of their previous six semis. France, who beat England 2-1 in the quarter-finals, will have to overcome Morocco on 14 December to make it to their fourth World Cup final.

France’s previous semi-final appearance, of course, came in 2018. They went up against Belgium at the Krestovsky Stadium and secured a narrow 1-0 victory over them. France then took on Croatia in the final and picked up a 4-2 victory to seal their second World Cup.

Italy, who have won the tournament a whopping four times, have participated in the 18 editions of the FIFA World Cup, playing in seven semi-finals. In those seven semi-finals, they have come out on top on six occasions, which goes on to show how well they play in the final stages of the World Cup. Their only semi-final defeat came against Argentina in 1990. They lost the game 4-3 on penalties following a 1-1 stalemate at the end of extra time.

▪️ Equalizer in the 92nd minute▪️ FIVE goals in extra time▪️ Rivera scored the winner while the TV was still showing replays of Müller’s equalizerImagine if any of the 2022 World Cup semifinals are as wild as Italy vs. West Germany in 1970 🤯 https://t.co/MwPVTqT3B5

Italy’s last semi-final appearance came in 2006. They beat Germany 2-0 in extra time to set up a mouth-watering final against France. French legend Zinedine Zidane saw a red card for his headbutt on Marco Materazzi before the match (1-1 after extra time) went into penalties. The Azzurri came out on top in the shootout, beating France 4-3, and lifting their fourth World Cup.

Record five-time world champions Brazil have played in every iteration (22) of the FIFA World Cup, reaching the final-four eight times. Impressively, they won seven of the eight semi-finals, with their only defeat coming against Germany eight years ago in 2014.

Brazil’s last semi-final appearance, which also marked their worst display at a FIFA World Cup, came against Germany in 2014. Selecao were massacred by the efficient Germans at the Mineirao Stadium in Brazil, falling to a shambolic 7-1 defeat.

Canarinho have fallen early in the last two editions of the World Cup. In 2018, they were beaten 2-1 by Belgium in the quarter-finals. This year in Qatar, Croatia got the better of them on penalties, securing a 4-2 win in the shootout after the game finished 1-1 at the end of extra time.

Four-time world champions Germany have appeared in 20 editions of the FIFA World Cup, reaching the semi-finals on 12 occasions. They have come out on top in eight of the 12 semi-finals they have participated in. Their record makes them the most consistent team in the history of the tournament.

Germany’s last semi-final appearance, of course, came in 2014. Die Mannschaft took on five-time winners Brazil at the Mineirao Stadium and inflicted a historic 7-1 defeat upon them. They faced another South American giant, Argentina, in the final, and once again came out on top. Mario Gotze scored in the 113th minute to take them to their fourth World Cup.

A quick reminder that Germany’s 2022 World Cup campaign was filmed behind the scenes for Amazon’s next ‘All or Nothing’ series 🍿👀 https://t.co/esntFcNfwp

Germany have been particularly disappointing in the last two iterations of the FIFA World Cup. In 2018, they finished fourth in Group F with three points and were eliminated. They picked up a point more at the Qatar World Cup but the outcome did not change. Finishing behind second-placed Spain on goal difference, they were knocked out of the tournament.


Hyundai To Lead US Market For Hydrogen Fuel Cell Trucks