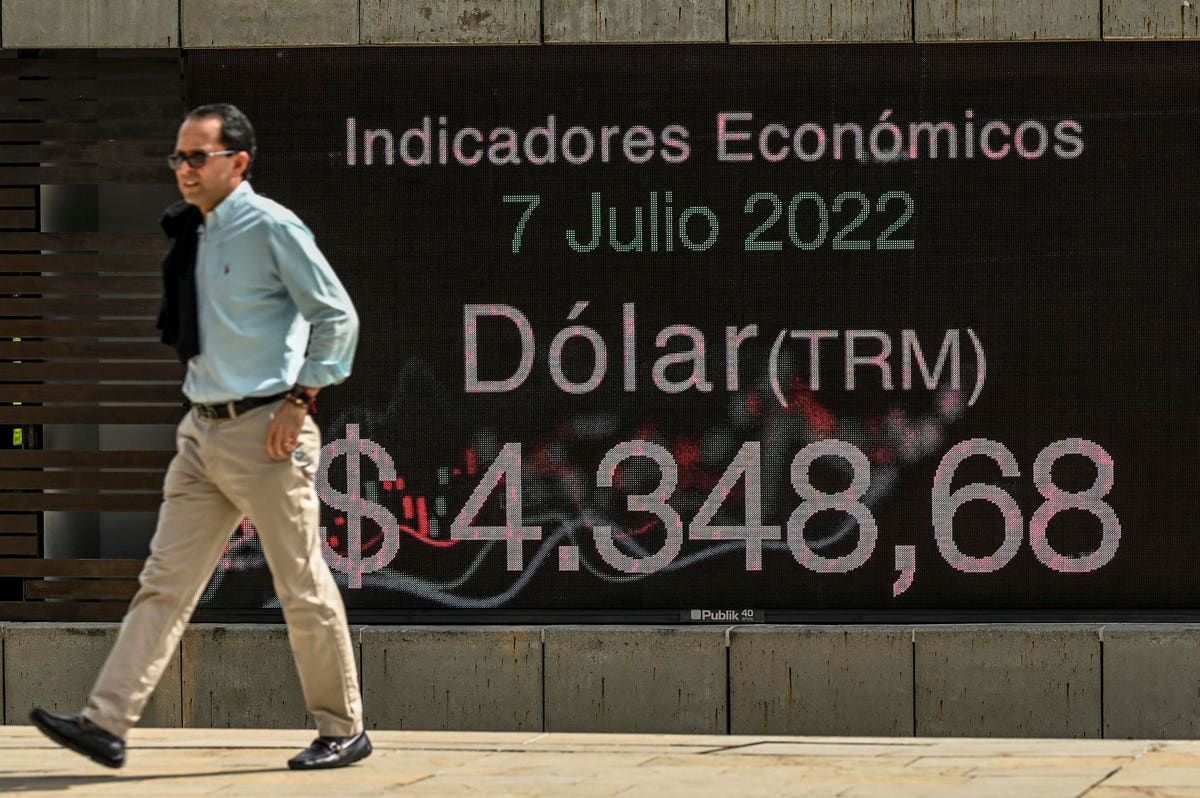 Fixed-income investors are nursing heavy mark-to-market losses in 2021. For many emerging market debt holders, it has been even worse. EM debt is one of the worst performing asset classes so far this year. Invesco’s Emerging Markets USD Sovereign Bond ETF (PCY) has plummeted 30% year-to-date, and VanEck’s JP Morgan EM Local Currency Bond ETF (EMLC) has dropped close to 16%. Very few sovereign debt issuers have been spared.

Several forces have conspired to cause such widespread pain.

Higher interest rates in the US

US bond yields are partly to blame. Short-term and long-term interest rates have rocketed higher in response to deepening inflationary pressures. US Treasuries serve as a market benchmark, with the yield on bonds from other sovereign issuers quoted as a spread to US government bonds. One of the reasons why dollar-denominated emerging market debt has underperformed local currency debt is the severe backup in Treasury yields.

10-year yields in the US have more than doubled in 2022, rising from 1.5% to over 3%, causing losses for holders of government, corporate and mortgage securities. The Bloomberg Barclays Aggregate Bond ETF (AGG) has shed more than 10% since the start of the year. A good portion of the losses for EM debt investors has come from the change in US interest rates.

Negative impact of US dollar strength

The rise in US yields, along with safe haven flows, has attracted foreign investors to the US dollar assets. The dollar has strengthened against almost every currency this year and is trading near a multi-decade high. As a result, currencies from many developed and emerging markets are hovering near their all-time lows.

While that should be good for those economies that are export-driven, it also leads to inflation as imported goods get more expensive. A downward currency spiral is a particular concern for investors in EM-issued dollar bonds.

EM central banks have responded to excess pressure by tighter monetary policy to address the pass-through to domestic prices of weaker currencies Also, rapidly weakening currencies and high FX volatility could generate significant dislocations in an economy and undermine financial and political stability.

Economic growth is trending down

Even as the growth outlook deteriorated, central banks are likely to extend rate hiking cycles, moving monetary stance deeper into contractionary territory. Commodity prices soared following Russia’s invasion of Ukraine, but most have subsequently returned to pre-war levels or dropped even lower on expectations of a slowdown in global demand.

Worsening terms of trade from lower exports for some EM economies often leads to weakness in the foreign exchange market, which helps to push inflation higher, soliciting central banks to respond by raising interest rates. EM assets – both debt and equity – usually do better when the global economy is expanding, not shrinking.

There is not just an interest rate component to EM debt but also a credit component. Unlike US government bonds that are AAA-rated, debt from most EM countries is rated low investment grade (BBB) ​​grade or high-yield (BB or below).

In a world where capital allocators move from one asset class to another in search of the most yield for the least risk, EM bonds will suffer in a widening credit spread environment. A recent report by Barclays for institutional investors highlights that relative valuations to maturity and rating-matched US peers are still not inviting. They note that in historical terms, EM investment grade bonds are rich compared to US corporate bonds, and EM high yield debt does not screen as cheap to US counterparts. While EM bonds have repriced, so has everything else.

There are always going to be geopolitical risks in markets. Investors take these risks into account when valuing financial assets. It’s when investors get surprised by something they didn’t see coming that volatility spikes. Russia’s invasion of Ukraine is an example. Risks of a conflict were building, but few analysts and investors thought the conflict would escalate so quickly and to the point that it would cause a global energy crisis.

International trade maps are being redrawn and the result will have a lasting effect on the economics of EM countries and geopolitics. Investors are better at dealing with risk than uncertainty. Right now, uncertainty over the situation in Russia has created an enormous range of possible outcomes, and investors are demanding more risk premium to account for potential negative and “tail” outcomes. EM debt, especially from countries directly impacted by the war, is extremely vulnerable to such unpredictable forces.

Volatility in the US interest rate market

Implied volatility in the US Treasury market, measured by the MOVE index, has climbed to the highest level since the pandemic-induced panic in the spring of 2020. The record level of implied and realized volatility has spilled over into emerging market bonds, causing investors to demand larger risk premiums.

Risk aversion, capital outflows and rate and FX volatility has sent one-month realized volatility in EM 10-year local debt markets (as measured by a sample of 13 countries) jumping to just under two times that of US Treasury volatility, according to Barclays . That level is near the peak of the early stages of the pandemic. Barclays argues it is the variation in US rates rather than the level of US Treasury yields that are driving the stress in emerging market fixed-income.

The turmoil in the emerging market debt market can be highlighted by looking at a few countries in more detail:

Ukraine’s struggles are apparent: Russia’s invasion has restricted trade, disrupted daily life and shattered economic growth. The situation is so dire that the country is seeking to delay payments on foreign debt. Kyiv wants to reach an agreement with bondholders by Aug. 15 that involves a two-year payment freeze.

Bondholders have dumped their holdings, making Ukraine among the worst performing US dollar sovereign debt issuers. Ukraine has about $25 billion of outstanding foreign debt, so it is a sizable issuer. Its dollar bonds due in 2028 yield 58% and are trading around 20 cents on the dollar, down from over par before Russia’s invasion in February. Despite international support, holders of Ukrainian debt are expected to take a significant haircut in a restructuring.

Colombia’s bond market has suffered from the election of a leftist government and its plans to eliminate new crude oil exploration. Crude oil accounts for more than 30% of the country’s exports. President Petro also seeks to expand social programs and impose higher taxes on the wealthy. Investors have voted as well, pummeling the price of local currency and US dollar bonds.

The price of the local currency 7.25% bond maturing in 2050 has dropped from 86.1 at the start of the year to a current price of 57.1, leaving bondholders with a negative 33% return. The 2050 bond now yields 13%, up from 8.5% in January. Foreign investors have fared even worse. The Colombian peso has shed 6% of its value to the US dollar. A weak currency and inflation that is approaching 10% triggered the central bank to raise interest rates by 150 bps at the end of June.

Colombia’s US dollar-denominated bonds have decreased in price due to the rise in US interest rates and widening credit spreads. The BB-rated USD 6.125% coupon bond maturing in 2041 has fallen to 78 cents on the dollar, down from a price of 103 in January. The yield on that bond is now 8.5%, up from 5.85%. Holders are sitting on a YTD mark-to-market loss of 21%.

Colombian debt is getting hit from all angles: a slowdown in growth, political turmoil, a strong dollar and a general widening in credit risk premium.

Hungary has one of the world’s worst performing local currency bond markets. Fitch called it one of the most vulnerable European countries due to its exposure to Russian gas. The country has a low level of FX reserves, and its current account has widened. Core inflation rose to an annualized 13.8% in June, prompting the central bank to raise interest rates by 200 bps to 9.75% earlier this month. An ongoing dispute with the EU over rule-of-law issues threatens future funding. Depreciation pressure on the Forint has caused a 15% loss in value versus the US dollar. Clearly, there are a lot of headwinds for Hungary at the moment.

The economic and political uncertainty has sent bond investors running. The 3% 2041 local currency bond has collapsed from 78 cents on the dollar to 51 cents this year. A turnaround in sentiment requires stabilization of the Forint and a resolution to the energy crisis that plagues all of Europe.

Sovereign EM debt investors are licking their wounds, waiting for a turnaround in the external environment that has caused devastation in the bond market. When these forces abate, so should the pressures on EM.