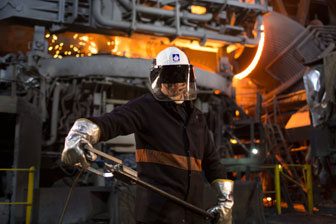 45 workers will lose their jobs in West Bromwich, as a major steel company gets rid of 207 roles across the UK.

Liberty Steel, a manufacturer of complex steel for the aerospace and energy sector, is making the move as it starts the next step in its restructuring and transformation plans.

The firm announced plans to sell its West Bromwich and Kidderminster sites last May and turned its attention to its Greensteel operation in Rotherham.

A consultation has been launched by Liberty with its employees and unions to complete its restructure of its special alloys businesses ahead of a possible sale or partnership.

He added: “The steps we’re announcing today will help ensure they are competitive in the future, with job creation at our Rotherham plant enabling us to mitigate a large percentage of role reductions at other sites.

“It sets a strong platform for Liberty’s Greensteel expansion in which we will increase recycling of steel scrap in low carbon electric arc furnaces to meet growing demand in infrastructure and construction.”

162 roles will be lost at the high value manufacturing Stocksbridge plant at Sheffield. Some staff will be given the opportunity to work in Rotherham, where around 160 roles will be created at the Greensteel scrap steel recycling plant.

The firm owned by Sanjeev Gupta relied upon Gupta and Credit Suisse, but when its main financial backer Greensill Capital went bust, it raised concerns about Liberty’s future and the 5,000 people it employs in the UK.

When the financing company went into administration, its lawyers revealed that it had around five billion dollars (£ 3.5 billion) of exposure to Liberty’s parent company GFG Alliance.

Liberty also owns Liberty Specialty Steels Bright Bar in All Saints Road, Wednesbury, where some of the West Bromwich staff may be able to move to.

Canaccord Genuity has been appointed as the group’s financial adviser to assist in the sale.

Alun Davies, national officer for Union Community, said: “The last year has been extremely difficult and we recognize change is required to secure the future of the businesses. For too long our members have been working under a cloud of uncertainty.

“Restructuring is always challenging, but the trade unions will engage constructively in the consultation process to safeguard the interests of the workforce. Under no circumstances will the unions accept any hard redundancies; every worker who wants a job must have one.

“The company’s plans to restructure the special alloys business were reviewed by the unions’ independent experts, who found them to be credible. However, if Liberty is to move forward with a sale of the business, the steel supply chain must be guaranteed and the unions fully consulted on all aspects of the process. ”